Ready for the big one…

We’re back in Long Beach after the “preview trip” – and I think it’s safe to say that we’re more convinced than ever that we’re ready for the BIG trip. 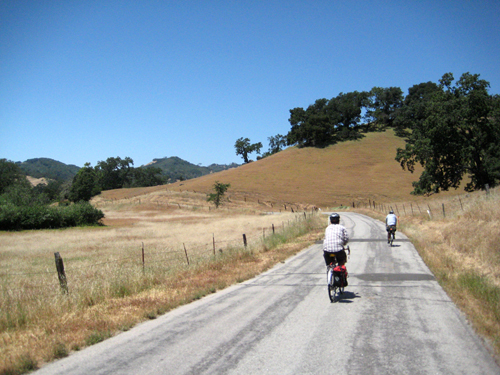 We rode through the Carrizo Plain, along the San Andreas Fault, which is one of the most remote places in California. We summited a 5080-foot peak in the Sespe Mountains. We carried food and water for three days (and didn’t shower during that time either). And we came through to the other side with smiles on our faces.

Now, maybe three days in the middle of nowhere doesn’t really prepare a person for spending months on the road, but we both feel that this trip pushed us to be stronger riders and more intrepid travelers. 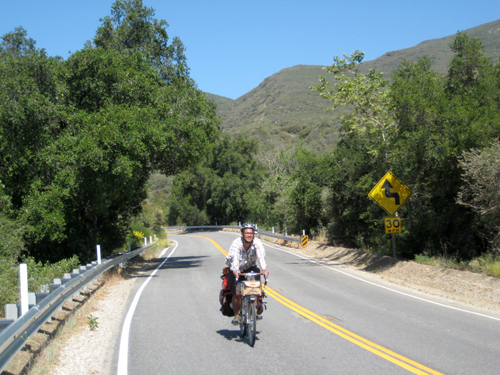 Personally, I learned some very important lessons over the past few days on the road…

1. Having caffeine in the afternoon is extremely important (so long as I’m as addicted as I am) – and making sun tea by putting a tea bag in a spare water bottle and strapping it to the back rack is a great way to “make do” when you’re in an area that’s lacking in coffee shops.

2. I actually like my hair when it hasn’t been washed for several days. Because it takes on a mind of its own and becomes “impossible” to manage, I quit trying and learned to appreciate the new-found “magic stay” quality. Which all leads me to believe that dreading my hair might be somewhere in the near-ish future.

3. I really need to learn to be less apprehensive about approaching people. When water is scarce and you need to fill up your bottle out of someone’s hose, or when you’re in the middle of nowhere and a bit of local knowledge could help make sense of your situation – these are times when it’s important to step up and ask. One of our fellow travelers on this trip was fearless about talking to strangers – and it enriched the trip because of it.

4. Letting air out of your tires to help you “float” over dirt and gravel roads is absolutely worth the time and energy it will take later when you have to put the air back in. I skidded around way too much because I was too stubborn to let out any air because I didn’t want to deal with pumping my tires back up. In retrospect, the time spent pumping air into the tires at the end of the road would have been much less than the time I spent trying to keep myself from fishtailing.

5. You really can ride up anything if you just drop into a low-enough gear, keep pedaling and find your inner zen. On a day ride around the Paso Robles area, we climbed up Cypress Mountain on a string of roads that hit a 15% grade in places. Standing at the bottom of one of these roads and looking at it snake up at a wildly steep angle, I actually contemplated whether I should even bother to try to ride up the hill – when our 75-year-old riding partner, Jim, turned the corner in front of me and just pedaled up the hill without blinking an eye.