This recent bike trip was really a wonderful shake-down ride for me. Not only did it push me through some difficult terrain and show me that I can actually do it – it was a great test of my packing. I put a lot of thought into what I brought on this trip and how I carried it, so that I would come back knowing exactly what I wanted to change. And, I have some tweaks to make…

My plan was this: Use two rear panniers (one for food, one for clothes), and strap the sleeping bag, tent and folding chair on to the tops of each pannier. A small-ish handlebar bag would hold wallet, phone, maps, snacks, etc. 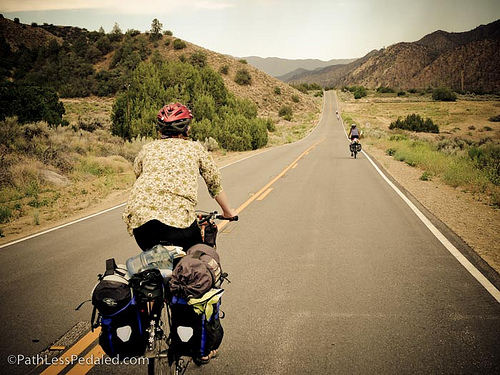 Of course, reality is never as streamlined as your plan. I ended up carrying everything the way I’d intended through the entire trip, but I noticed that it was a less-than-ideal situation when I started cramming my panniers full of food for three days of being in the middle of nowhere. Stuffing the sleeping bag under the top straps on my pannier only worked well when the pannier was half or 2/3 full. When the pannier was full, it became almost more trouble than it was worth to get the bag under the straps. I started thinking that maybe Russ was on to something with his rack bag, except that I really liked having my rack open for carrying water.

I also noticed (duh!) that food is a heck of a lot heavier than clothes – and I had to split the food out into both panniers and effectively pack my other stuff around the food.

The other thing that I’ve been pondering is how to carry a portable metals studio. After slogging up a 5-mile climb, I started to reconsider my plan to lash my Pelican case to the front. That case weighs a couple pounds on its own, so I’m thinking there must be a more lightweight solution (like, perhaps, a custom-made bike burrito?).

Which leads me to wondering about front panniers. I’ve always looked at tourists with front and rear panniers and thought they were crazy for carrying so much stuff. Now, I’m tempted by the wiggle room that a pair of front panniers would provide. Does anyone have experience using front and rear panniers on a long trip? What did you like or dislike? Did you have much trouble hauling them onto trains and such? I will happily take any and all thoughts on the matter.

As far as the actual items that I packed, I have to say that I’m pretty happy with my selections and there are only a few changes to make in that arena. (Hooray for me!) We’ll start updating the gear page in a short while with the items that we know we’re going to carry, so keep an eye out for that.

Leave a Reply to Laura