Piecing together our route

Yippee – I can officially say that our route is beginning to come together! 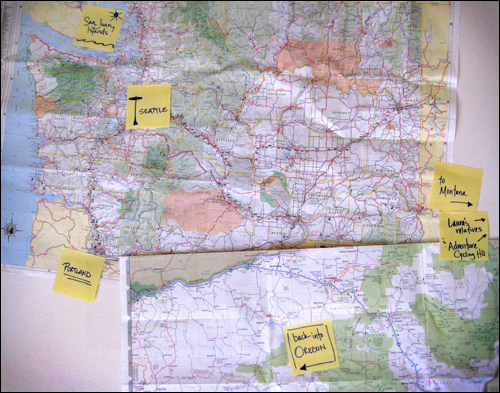 After spending some time in Portland and Corvallis (Oregon), we’re headed up into Washington. The exact route is yet to be determined, but we’d like to roll through Seattle, the Olympic Peninsula, perhaps the very West part of the state (along the ocean), and the San Juan Islands (which I am particularly excited about, as I have one fuzzy memory of Orcas Island from a mid-1980s family vacation).

Then, we’ll head across Washington into Idaho (crossing at Clarkston or Pullman?) – and on to Montana (to Arlee, home of my relatives, and Missoula, home of Adventure Cycling).

From Montana, we’re going to head South West, dropping into Eastern and Central Oregon (in an effort to avoid as much snow as possible!). We’re thinking that we’ll wind up riding back down through California, so that we can cross the Southern US during the winter (again, to avoid the snow and such).

I’ve updated the google calendar on our “where in the world” page to show where we’re headed. The dates (other than Portland and Corvallis) are extremely rough, so don’t hold us to them, but we wanted to put them up so that we can start connecting with folks that will be along our route. If we’re passing near you (or near someone we should meet and/or interview), let us know!