Home > Uncategorized > On Learning to Slow Down…

On Learning to Slow Down…

We’re now about three and a half weeks into our trip. We’ve spent several consecutive days on the road and we’ve hung out in some great cities. We’ve camped and crashed in guest rooms and met some amazing folks. And we’re starting to feel like we’re almost getting into the swing of this new life.

One of the primary goals of this trip is for it to be non-linear. We didn’t want to map out a detailed route and then follow it letter-by-letter every day. Instead, we wanted to be able to feel our way across the US and be guided by the seasons and the people we meet. The opportunity to slow down is one of the greatest gifts of bike touring… and we both want to embrace it and see where it takes us.

That said, this way of traveling is extremely different from any other bike tour we’ve done previously (all of which have been very Point-A-to-Point-B). And we’re learning that actually slowing down (and taking the time to read or sketch or being okay with only riding 20 miles) is much harder than expected.

Our ride North from Portland to Seattle turned out to be a string of 40-or-so-mile days, back-to-back, almost routine, as if it was just a very long commute. (Which is not to say that they weren’t full of amazing scenery and interesting people, only that we began to feel dictated by the need to get to that night’s end-point.) And we realized that we had begun to do exactly what we had set out not to do… zip down the road to our next destination. It’s hard to change your patterns. Even if the rest of our life has completely changed, our bike touring pattern hasn’t… yet… and we’re finding that we have to teach ourselves how to slow down, incorporate more spontaneity, break up the routine.

Our last night of camping before rolling into Seattle was at a beautiful spot called Twanoh State Park. It was right along the water, it was away from the rest of the campers, it was peaceful and a great place to catch up with our thoughts… and it was 14 miles down the road from where we had camped the night before. We ate lunch there and contemplated stopping for the day and camping in that spot. Were we okay with not going very far that day? Would it make us lesser cyclists for having a short mileage day? In the end, we chose to stay… and it opened up the opportunity for me to sketch, for Russ to write, and for both of us to indulge in fudge bars and a glorious sunset. 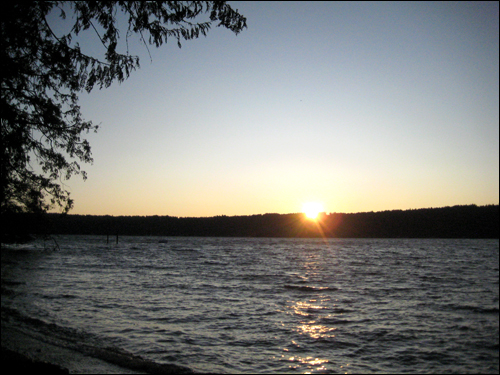 It seems ironic that it would be difficult to not juggle many different things at once, and that it would be challenging to remember that we are, after all, the ones dictating the pace of this trip. But, in having to re-learn how to slow down, we’ve had to become more aware of our actions and patterns, causing us to be more present in every moment and actively choose what we want our lives to look like. Without a doubt, this will continue to be a difficult lesson to learn, as we continue to make sense of the flow of this trip and and let go of expectations… but it does not escape me what a precious gift it truly is to be conscious in our lives.

And, as an aside, Seattle has proven to be a great place for entering into discussions of consumerism, growth, responsibility … and slowing down. Thanks everyone!