Yes, we’re at it again… making changes (big and small) to the stuff that we’re carrying along with us. It’s not that we’re fickle, just that we’re learning how to fine-tune all the details. After four months of living out of panniers, we’re discovering that we don’t really need as many options as we brought along, that the amount of weight we’re carrying really does hold us back, and that a little creativity can go a long way.

After meeting Jeff of Carousel Design Works, the seed was planted in our brains that we needed to drop some of the weight that was strapped to the bikes. We always knew that our loads were heavy and that we were slow because of it, but it wasn’t until we met Jeff and rode a bit with him that it started to sink in how much was out of reach for us because of all the stuff we were packing.

Looking back at why we decided to carry so much stuff, I think it had to do with giving ourselves options. It’s not an easy thing to leave everything behind and travel with just a few meager items on your bike. So we (subconsciously) packed in a way that gave us choices, and kept some continuity in our lives. Now that we’re well into this journey, we’re realizing that we firmly want to choose this lifestyle of traveling on bike, and it’s worth it to us to leave all the other options behind (for now, at least).

What this means is that we have thought long and hard about every bit of gear, while we’ve had this downtime in Long Beach. We made a trek out to REI to swap some items. We’ve been modifying bits here and there. And we have a growing pile of items that will be boxed up and left behind when we hit the road again.

So, here are the details… (I’ve also updated the Gear page again, including adding a section about items that have been jettisoned)…

For me, the biggest areas to make changes to are 1) my studio and 2) the food-carrying set-up. At first, I wasn’t sure that I could really shave off any weight. I mean, my studio was already extremely pared down, and it’s pretty important to be able to carry food. But, when I started to really examine everything and think outside of the “I don’t know” mentality, I found all sorts of great ideas.

In looking at my studio, I started by re-thinking each item inside my tool roll… Am I really using it? Is there a way that I could make something else do double-duty in order to get rid of something? I was able to weed out several items that I had packed that I wasn’t really using, like my shears (which are actually quite heavy) and extra needle files. I swapped out my (rather heavy) bracelet mandrel in favor of a piece of copper piping, for forming headbadges and Bike Mustaches. I bought a bottle of nail polish, cleaned it out, and filled it with shellac, so that I wouldn’t have to carry a heavy can of the stuff (which I use for my jewelry). And I realized that I could turn two hammers into one by re-forming one end of my riveting hammer to mimic the ball peen end of another hammer. 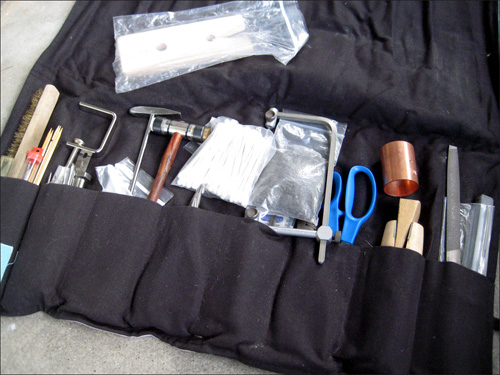 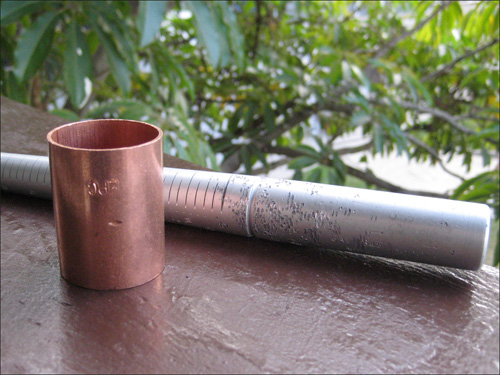 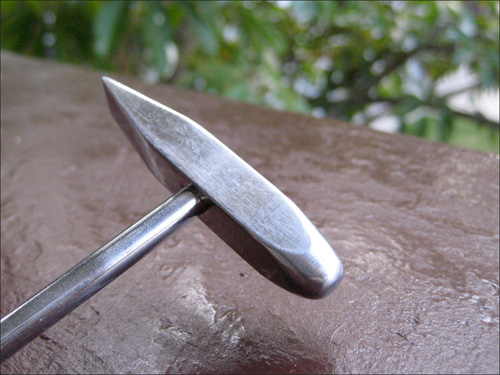 Next came the food… Back when we were in the Bay Area, when we last made big changes to all our gear, I bought a duffel bag to carry the food across the back rack of my bike, instead of in one single pannier. This is actually a great way to carry food, and I’m going to stick with it… albeit, with a different bag. The duffel I bought turned out to be WAY too big. And since we all know that nature abhors a vacuum, I ended up filling it up. Again, it’s nice to have choices, but it’s too easy to go overboard. There were days, riding through Gold Country, when that duffel full of food easily weighed in at 20 pounds or more. A smaller duffel, in theory, will limit the quantity (and, thus, weight) of food that I carry.

We’re also waiting on receipt of a new stove stand/wind screen that will replace the one that we have. Not that the one we have weighs a lot, but it’s quite bulky. The new stand is smaller and will allow my to carry more in the kitchen pannier, thus taking some bulk out of the food pannier. We’ll show you the new stand when it arrives.

As for Russ, he has also been busy picking through his belongings with a fine-tooth comb. We made the decision to return the LED lantern that we had. While it was nice to have something with us that puts out some ambient lighting, this lantern never really performed the way we had hoped, plus it was quite big and bulky (and, oh yeah, we already have headlamps). Russ also swapped out our water filter, moving from a pump version to a gravity-feed version (the MSR AutoFlow Gravity Filter)… partly because pumping water is a pain in the butt, and partly because we both became so enamored of the idea of letting gravity do the work for us. It also turns out that the gravity-feed system weighs less!

And, like I did with my studio, Russ has been paring down his photo equipment. He carried almost a full kit down the west coast (2500 miles) for a whopping two shoots. Not really a good return on the investment of carrying it all. So, all the heavy equipment that he’s using only once in a while, he’s putting together in a well-packed box, to be put in the hands of someone very trust-worthy, and to be shipped to him as he needs it down the road. (Which means, if you’re interested in a well-lit studio-type shoot, such as food, make sure you give him a bit of notice, so that all the gear can arrive in plenty of time.)

Other items that have been plucked out… Russ is swapping out his very large knife (that he picked up two months ago, after his Mora knife chipped) for a smaller, more useful one. He’s also swapping out the hard drive that he’s carrying, for a smaller, BUS-powered one (meaning that it will pull power from the computer and doesn’t need its own electrical outlet). Russ has also pulled out a few non-essential tools. I’ve pulled out excess paperwork that I’ve been carrying, as well as a few random odds and ends (that don’t weigh much on their own, but contribute to the total of the gear being too heavy.

And, amusingly, I’m swapping out my pants again. After buying the Lole pants, I discovered that they stretch out very quickly. Which is fine for camping, but not so flattering in-town. When we rolled into Long Beach, I went to the thrift store to pick up a cheap pair of pants to wear while we were in town. For $6, I found a great pair of black chinos, that fit better and don’t stretch out as quickly. So, I’ll be bringing these instead. And learning a good lesson about not always needing to buy the fancy gear that is oh-so-enticing at REI. 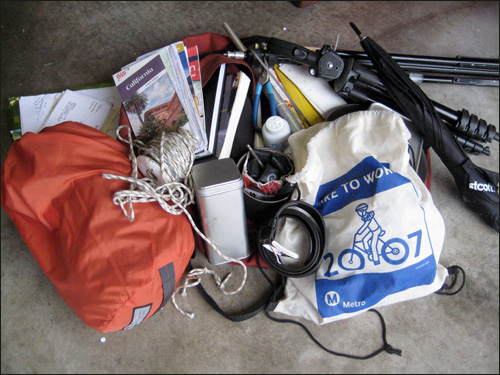 As we’ve been working our way through all of our belongings and figuring out what we’re getting rid of, we’ve been collecting them all in one location (the too-big duffel bag that I’m getting rid of). As of now, we’re at 25 pounds that we’re shedding. We still have a week in town, and we’re determined to get our loads down to a more manageable weight, so we’re continuing to fine-tune and shave off every ounce possible before we head out again.

And, I’m realizing, keeping our gear to a manageable weight is a continual process. Even though we’ve pared our lives down to just a handful of items that we physically carry everywhere we go, we’re not immune to the siren song of collecting stuff that so affects our culture. It’s really easy to think, ‘Oh, this one item doesn’t really weigh very much, I’ll just go ahead and get it,’ and slowly amass a dozen or more new items that, collectively, weigh several pounds. As we keep traveling, we’ll necessarily need to keep revisiting the stuff that we have with us, and culling the non-essentials. I’m considering it a good exercise in remaining aware.