(We are going to start a new column on the website, simply called #BikeTourism. It will focus on industry trends and news relevant to this emergent field. We are hoping that as people see the work we are doing the idea will catch on!)

The announcement of the new camo Cogburn fat bike has been making the rounds on the internet. Cogburn is a new QBP brand that looks like it will be targeting the sportsmen crowd whose primary interest is hunting and fishing and may be interested in bicycling. This seems like the perfect lovechild between QBP and its outdoor counterpart Q-Outdoors.

While most of the attention has been focused on its camo paint job (which does look pretty awesome) and its fatness, the bigger and more exciting story is the subtext of this move. Let’s face it, bicycling is too often viewed in connection with people that live in cities. Cogburn could be the first brand that is targeting potential rural cyclists that don’t live in cities and have no interest in the bike as transportation, but could use it in conjunction with other activities. It is taking the bicycle to previously uncharted and vast waters. 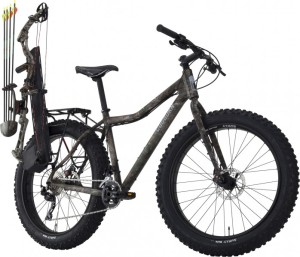 What excites us most about Cogburn is how it dovetails with our interests in bicycle tourism. In our experience, rural communities are latent bicycle proponents. They won’t be advocating for protected green lanes on their Main Street with a single traffic light, but they can recognize the economic gains of people with bikes staying overnight at their hotels and drinking beers at their bars. In short, you have to make bicycling relevant to the people you are trying to reach and can’t beat the same old drum. This is what Cogburn does from the industry and product level and it is brilliant. A Linus or Bakfiets doesn’t make sense in the country, nor does it make any real steps to reach a new rural market, but a bike with the right form and function (accessoriess to carry a bow, rifle or rod) does.

While I don’t think QBP views Cogburn as rural bicycle advocacy (who knows, they might!), I think it has the potential to act as such. The more people you can get on a bike, the more you can find common ground. While it might be a long time before a hunter and roadie are sharing beers and debating the advantages of running tubeless tires, this brings us one bike closer.