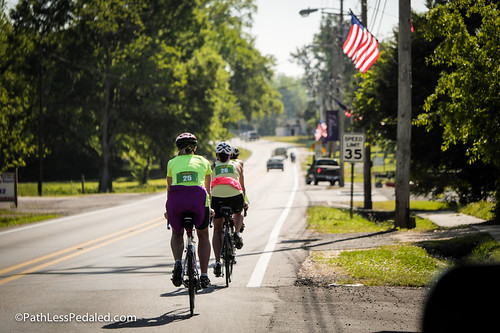 Let’s be honest, when most of us think about Mississippi, we don’t immediately think ‘Hey, that sounds like a good cycling destination.’ Truth or not, perception is powerful – which is why we jumped at the chance to consult with the town of Ridgeland, one of only two Bicycle-Friendly Communities in all of Mississippi.

We first met Mina at last year’s National Bicycle Tourism Conference. We were so surprised and impressed to see a small-town tourism professional from Mississippi that we couldn’t not find out all about Ridgeland and why they were thinking about bike tourism.

It turns out that the Mayor of Ridgeland, Gene McGee, is an avid cyclist. We’ve seen our fair share of politicians who dig out their dusty bikes whenever the press cameras show up – but this is not Mayor McGee, who hits the pavement for his daily rides whether or not anyone’s watching. The joke, we were told, is that any new ideas for the city had better include bikes.

Ridgeland is also conveniently located along the Natchez Trace, which is one of those great bucket list routes. Every year, Ridgeland sees hundreds of people ride by without stopping, pedaling as fast as possible because there’s too much traffic and everyone says to just get out of Dodge. If only those touring cyclists knew about the nearly-parallel, off-road, multi-use path that local cyclists credit with an increasing interest in biking. 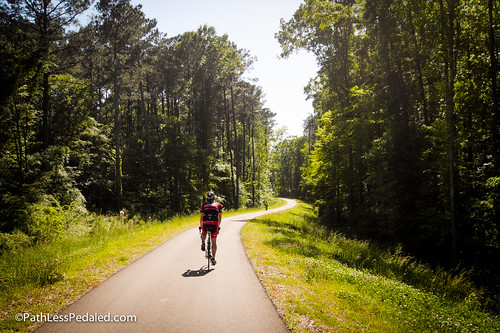 In short, Ridgeland has all the makings of a perfect bike tourism storm. So we flew out for a whirlwind weekend in early May – and came back excited to see what they create.

The anchor for the weekend was the Natchez Trace Century Ride. The good folks at Indian Cycles set us up on a pair of zippy road bikes, and we rode a portion of the century route. The ride may be named for the Trace, but the majority of the ride ventures away from the parkway, following small country roads through equally small towns and beside the Ross Barnett Reservoir (populated, we hear, with its fair share of gators). 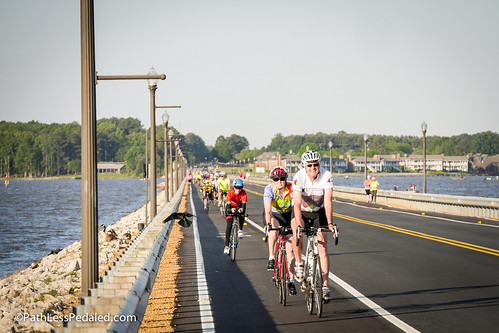 Four years ago, we crossed the Mississippi River into Vicksburg, pedaled into the Jackson area, and rode the Natchez Trace into Nashville. We may have spent two weeks in Mississippi, but most of it was either in urban Jackson or along the Trace. The century ride gave us the opportunity to ride into the country and really experience the area. The century ride also gave us the opportunity to enjoy the tree-lined streets and wave at the kids who were watching the riders go by – with the help and support of dozens of volunteers running rest stops and local police stopping traffic at busy intersections. 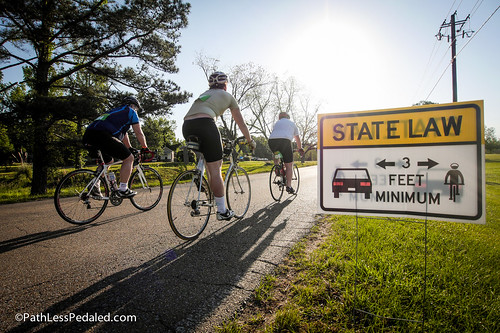 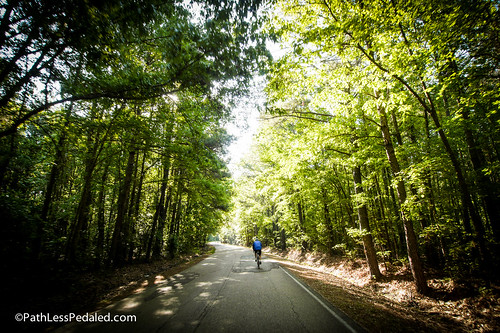 Beyond a shadow of a doubt, though, the best part of the century ride was the hospitality. The century ride treats all riders to a kick-off party the night before the ride, lunch after the ride, and a catered event that evening. This is not a ‘come, ride, get out’ sort of event, this is an invitation to linger and learn more.

Oh, and there were the delightful women in Pelahatchie who could hardly believe that we don’t say “y’all” on the West Coast. 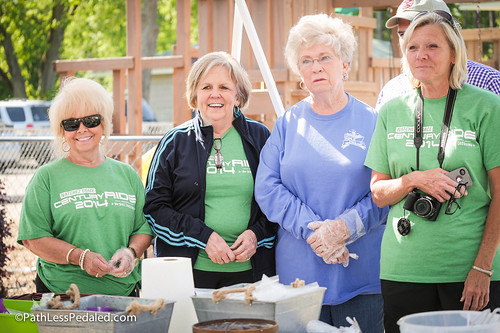 The rest of our weekend in Ridgeland was spent exploring possible day ride routes, touring the mountain bike park, riding the multi-use trail with the Mayor, talking with local cyclists, brainstorming new ideas, presenting about bike tourism, and eating way too much good food.

Granted, we also heard from folks who ride at 4am to avoid the traffic, or who always go out in a big group because ‘you never know what can happen’ – so there is still a lot of work to do. But, bicycling is on the rise in Ridgeland, and there’s a lot of genuine interest in embracing cycling as both a quality of life benefit and a tourism asset – and that’s where good things start.

Four years ago, when we rode through the South, we never thought these places would prick up their ears to the benefits of bicycling – and, yet, that’s exactly what’s starting to happen. One of the things that we tell small towns is that bike tourism allows them to embrace who they are, rather than needing to become “like Portland.” In the South, this makes even more sense, because just being “the South” is enough of an intrigue for those of us who don’t live there. Don’t believe me? Just imagine how good fried chicken and boiled shrimp will taste after a long bike ride.

After a great weekend in Ridgeland, seeing first-hand the growing momentum around bikes, we’re excited to see what they create, and how they help lead the rest of the South.