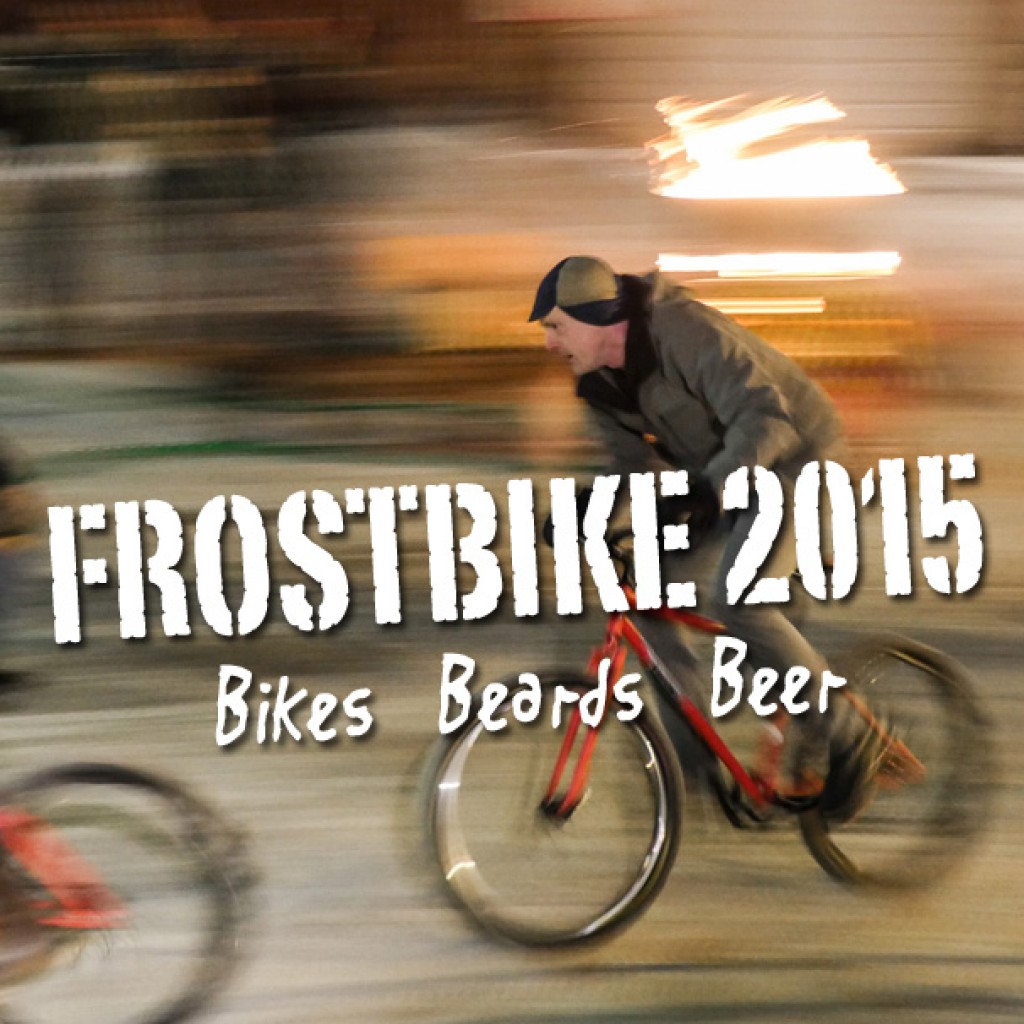 Follow the Beards
Laura and I are walking aimlessly at MSP airport. We are clearly looking lost. A woman’s voice calls out and says, “You must be Frostbikers.” I do a quick mental inventory and figure it is the Ortlieb backpacks that gives us away. It is Kathleen from FreeRangeCycles, a sweet bicycle commuting and touring shop in Seattle. We tell her that we’re looking for the lightrail into downtown. She says she heard that there is a shuttle for Frostbikers. We kill time talking about randonneuring bikes (her passion), wondering if we are in the right place for a shuttle that may or may not appear. Suddenly, when doubt is at its highwater mark, they appear, a group of twenty or so men with various degrees of beard walking with purpose. We had found our tribe. Without thinking or breaking a step, I say, “follow them!” 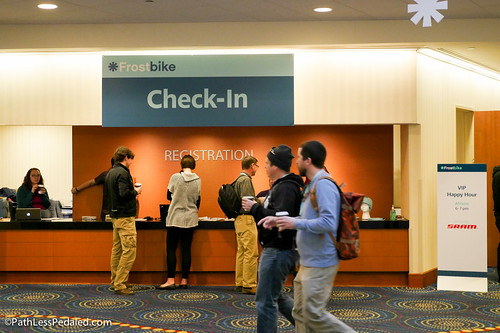 The Minneapolis Marrriot is decorated with giant snow flakes. At check-in, you are a given a choice between four beanie hats. At any other tradeshow, they would be seen as a cute giveaway, but with the weather hovering around -6 outside, the ill-prepared in attendance take them graciously. Scanning the crowd, there are hundreds of bicycle shop owners and employees from around the country. It is a winter gathering of the two-wheeled tribes and it is glorious. Working our way through the crowd and eyeballing name tags, there are people from shops that we’ve visited in our travels – (Bike Effect, The Mob Shop, Kyles Bikes) – and ones that we’ve only known through social media (North Central Cyclery, Angry Catfish, Topanga Creek Bicycles, Harris Cyclery).

Frostbike, someone described to us, is “a Midwestern Interbike.” People are friendlier and it doesn’t have the same frenetic craziness and over-the-top displays. “It draws primarily midwesterners, so the people are nicer.” While chatting with the different dealers and vendors, we definitely found that to be the case. Business meetings were being conducted, bikes and parts were being ordered, but people were a lot more relaxed and social. 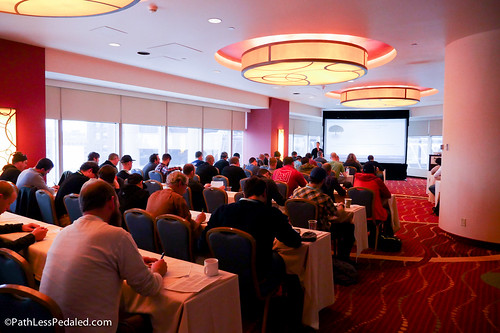 Aside from unveiling new bikes and products, Frostbike also has several seminars for the attendees. This year, there was everything from technical sessions for shop mechanics; to Jay Petervary talking about bikepacking; to QBP’s Director of Marketing, Ryan Johnson, presenting about branding. We attended the branding session and got more out of that hour session than any other all-day branding workshop. Ryan shared some of the techniques and frameworks that QBP uses to differentiate their different brands and how it could be applied to bike shops. If you are a bike dealer and have the opportunity to attend, the breakout sessions have lots of great content.

Salsa Steals the Show
Of course, one of the big reasons people go to these things is for product unveils. Perhaps the biggest news was at the Salsa display, where people gathered with baited breath to see what lay beneath the covers. Salsa debuted two new bikes: an updated Warbird, as well as the tandem 29er Powderkeg. By now all the specs have been published, so we won’t go into that minutiae. I will say that the Warbird is a stunning bike in person. The bridgeless seatstays are not only beautiful to behold, but offer big tire and mud clearances and purportedly smooth out the ride. The colors are eye-catching (yay there is an orange one!), and they have a nice understated nature to them with the bold tri-color bands. Salsa positions the Warbird as an almost strictly race-day gravel event bike (hence the lack of any mounting points for fenders or racks), but I like to see it as a sort of all-roads go-fast bike. A Vaya that has shed a few pounds and with a little more get up and go. The sort of bike that you take on a spirited road ride with friends as well as explore rougher forest and gravel roads with. 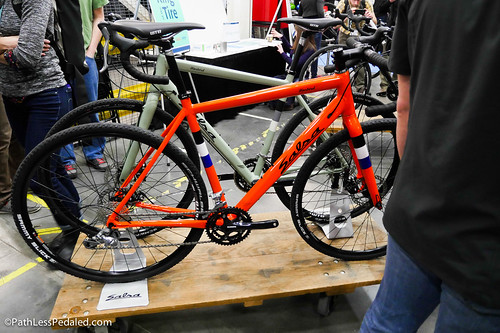 That orange is hawt!

In addition to the new bikes, Salsa also had on display their new Anything Cage HDs and matching dry bags. They also had their new waterproof roll top panniers at their booth, a nod to those who aren’t going completely rackless on tour. 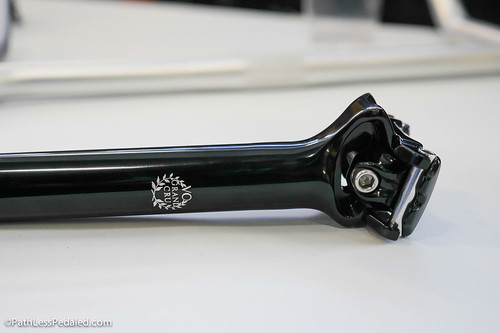 Other products we personally found interesting on the Expo floor included the popular Clement LGG, which is coming out in a wider 32mm flavor (I have the 28mm version on a bike and love it). And the Rocket Ratchet Lite, which I recently bought, is getting an upgrade (Rocket Ratchet Lite DX) and will come with two tire levers and a bit extender. Velo Orange showed off a seat post with easy adjustability. Instead of fiddling with bolts from the bottom, all adjustments are made from an easy to access side facing bolt.

Swapping Tales of Adventure by Bike 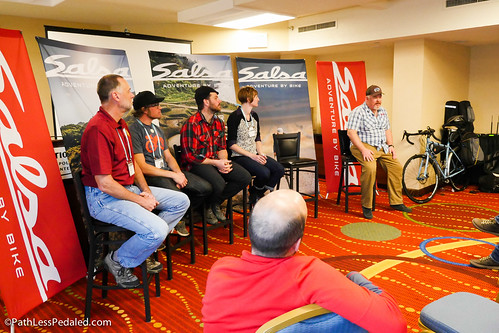 Honored to be on this esteemed panel.

One of the fun things we got to participate in was a panel specifically for Salsa’s international distributors. The theme was “adventure by bike” and we shared some bar stools with some amazing folks. There was Jim Cummins, one of the organizers of the Dirty Kanza 200; Jay Petervary, one of the most accomplished endurance cyclists in the world, and Ben Weaver, a talented folk musician who recently toured by bike from Minneapolis to New Orleans and played shows along the way. What was fascinating was that, although we were speaking from completely different aspects of bicycling, we all saw the bicycle as personally transformative and wanted to inspire others to ride. 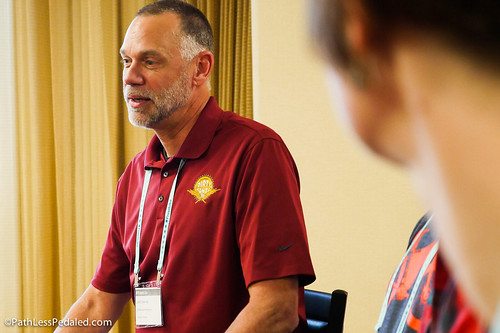 Jim Cummins talks about the impacts of the Dirty Kanza 200.

It was a great treat to hear Jim Cummins talk about the Dirty Kanza 200, not only from the rider perspective but from the economic perspective as well. Since they moved the race start from the outskirts of Emporia to downtown, it has been embraced by local businesses and provides a great economic boon to the area. He spoke about rider trading cards that they created which was an innovative way to involve the community and local businesses. One of his favorite accomplishments as race director for the Dirty Kanza 200 is the fact that it has been embraced by the community. He told us that when he first started riding around Emporia with a friend, he lamented not having many people to ride with. Now, more than 100 residents from Emporia have registered in the race. 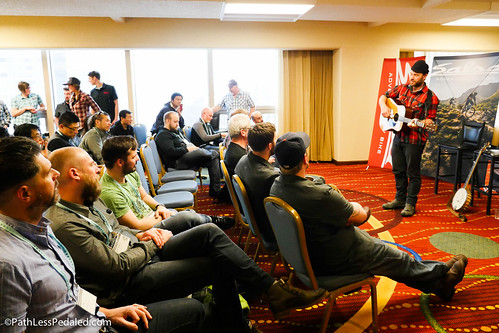 Ben Weaver closes the panel with a private performance.

The panel ended with Ben Weaver playing a few songs from his latest album that were inspired by traveling by bike.

Connecting the Dots
One morning, Laura and I decided to have a little #coffeeoutside session in our hotel room before heading to QBP headquarters for the expo. Although it was organized informally via Instagram at the 11th hour, we had a great crew of bikey coffee nerds show up. There was Chase, who is opening up a lifestyle bike shop/cafe with a focus on bike travel in Los Angeles; our friend Arleigh from BikeShopGirl.com; Scott from Salvagetti Bicycles in Denver, CO; our friend Adam from Bicycle Times; Lucas from Bunyan Velo, and Carl from Monkey Wrench Bicycles in Lincoln, NE. 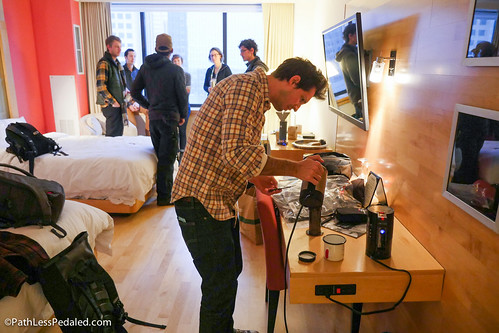 #Coffeeoutside inside session with some next gen bicycle industry folks.

The whole Frostbike experience was a lot like this for us. We met shop owners who we had met in the past and learned about new shops that were just opening. We also ran into quite a few readers, which was a treat since most of our interaction with our readers is just online. We talked to shop owners and employees around the country, trying to get a sense of the popularity of bicycle travel. We also listened about what they thought were the gaps and obstacles to its growth. For us, it was a fascinating anthropological look at the current state of biking. 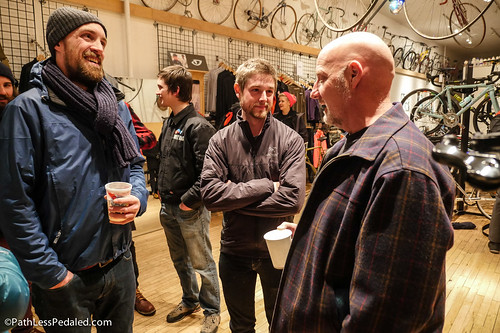 A lot of talking about adventure by bike with shop owners and event organizers.

After the official programming of Frostbike ended, Laura and I made a tour of Minneapolis bike shops that we’ve always wanted to check out. There was One on One, regarded as one of the first bicycle/coffee shops in Minneapolis (and the country?). They played host to an after party for Frostbikers which involved some sub-zero mini bike races in the alley. We stopped by Angry Catfish, a beautifully curated shop that not only serves up great coffee (Intelligentsia) but lots of high end soft goods and bikes. If you’re a bike nerd, it is a must. Around the corner from ACF is Mend Provisions, a next generation lifestyle fly fishing store. We went to Calhoun Cycles, a great commuter/folding bike/cargo bike focused shop (which coincidentally shared space with a coffee shop). We crammed as much as we could into the time remaining, all the while trying not to freeze our faces off. Minneapolis definitely requires another longer (and warmer) visit. Before flying back to Portland, we had lunch with some of the Salsa Cycles crew to talk about some future plans. Great things are afoot. We’ll leave it at that. 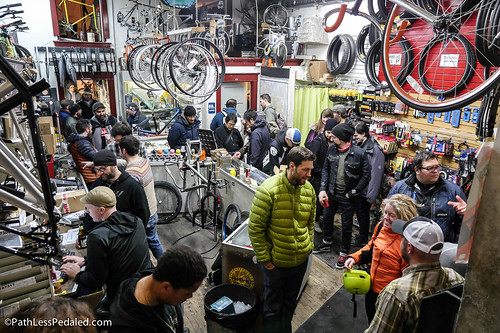 One on One packed with Frostbikers at an afterparty. 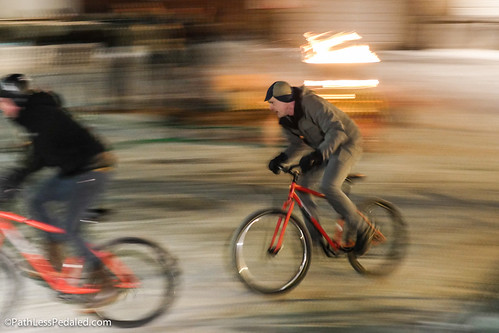 Winter does not stop bike fun in Minneapolis. 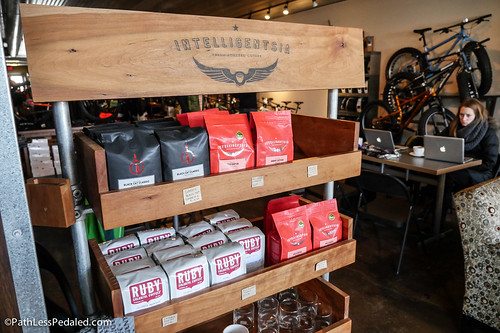 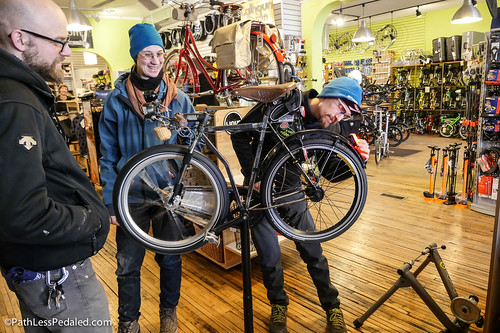 The crew from Coast in Bikes (Milwaukee, WI) nerding out on the dynamo display at Calhoun Cycles.

When we first got invited as media to Frostbike, the idea of visiting Minneapolis in February didn’t sound very appealing. We weren’t dealers or strictly a product review site anymore, but we are glad we went (and we hope you appreciate this different non-spec focused look at the event). The big takeaways we came away with is that the new generation of bike shop owners are eager to change the experience of what a bike shop is and that bicycle touring and travel is alive and well. If you get a chance to go as a dealer or shop employee it will be worth your while (just bring a coat…or several).