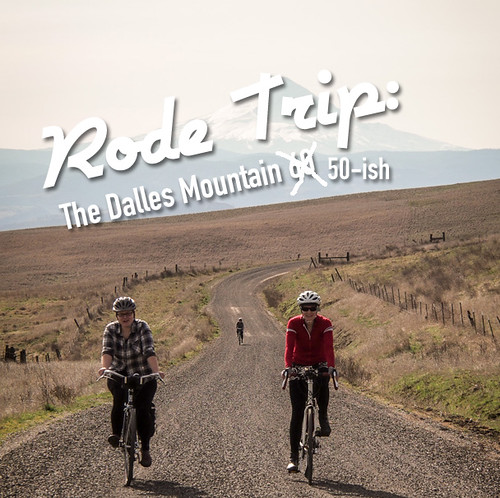 The Dalles Mountain 60 is a mixed terrain/gravel route in the Columbia Gorge which is a classic for Oregon cyclists. Mapped out by VeloDirt, curators of dirt bike adventures in Oregon, and run as an unofficial ride for a few years (though they have recently let go of the reins), it has taken on a bit of a mythic status. We deviated slightly from the “official” route near the end to make up some time. Hence 50-ish. We’ve wanted to ride the route for the last few years, but being car-free has made it difficult to get out to The Dalles. There are a few regional buses that go between Portland and The Dalles, but information on whether they take bikes or not is unclear. So when our friends Kelley and Kelly wanted to go ride it, we hopped at the chance.

Kelley suggested we start the route from Deschutes State Park rather than The Dalles (the “official” start of the route), which made perfect sense to us. Looking at the profile, you tackle both Old Moody Road and Dalles Mountain Road within the first half of the ride. This knocks off a majority of the climbing and the steepest parts of the ride fairly early on. We parked and got our bikes ready at Deschutes State Park. Day-use parking is free and there are restrooms. It is important to note that, at this time of year, the flush bathrooms are closed for the season, and water is turned off, so there is only a single port-a-loo. 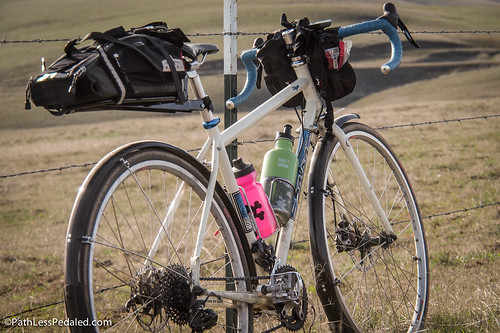 The Vaya as gravel bike.

Laura and I rode our Vayas. Though we’ve typically used them as loaded tourers, they actually have quite a gravel pedigree. Before Salsa’s Warbird came out, many a rider had used the Vaya as their gravel steed. I removed all the racks on mine and used a pair of Revelate Mountain Feedbags at the cockpit and an Arkel Randonneur Rack and Tailrider to carry everything else. I’ve used the Arkel rack and bag system on a few mixed terrain adventures, so I knew it would be up to the task. Another important change was that Laura and I were both carrying a 40oz Klean Kanteen and another 26oz water bottle. There are no services once you get on the dirt, so it helps to carry enough hydration. For tires, we were riding the minimum you would want to ride on the route. Laura had 28mm Panaracer Gravel Kings and I had 28mm Clement LGGs. They have a file tread so not much traction on steep dirt climbs. Most of our climbing was seated. It would have been nice to have something in the 30mm range with a bit more tread (something like the Panaracer Gravel Kings in a 32), so standing climbing would have been possible. 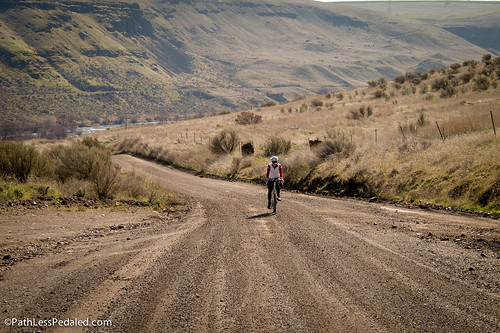 From Deschutes State Park, it is a short ride to the first climb of the day – Old Moody Road. It is a steep gravel climb with grade pitches in the 14-15% range. If you start from The Dalles, you face Old Moody Road at the end of the ride, which makes it a lot tougher. But since we were fresh from the start, we were able to enjoy the grind up to the top. After you summit Old Moody, it is rolling terrain past farms and a few settlements. The landscape (especially in the Spring) is really picturesque and pastoral. The gravel ends when you get to 15 Mile Road, which is a beautiful little country road that follows the curve of a little creek. The beauty of this route is that most of the riding (even the paved portions…though there are some caveats) is generally pretty good. 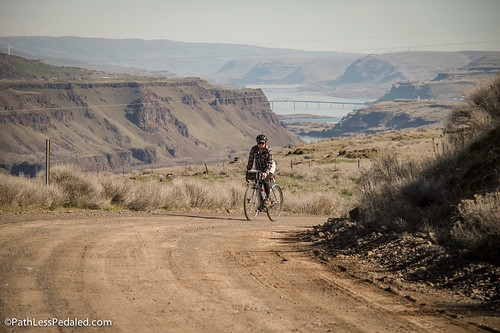 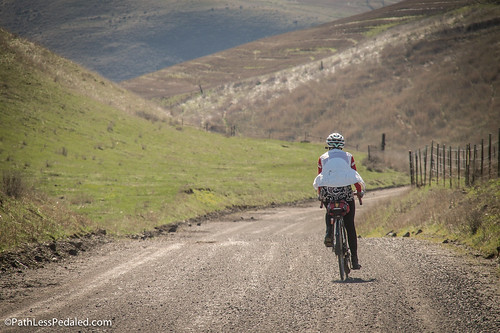 The pastoral-ness is suddenly lost when you enter The Dalles proper. There is the issue of crossing the Columbia River to the Washington side for the big climb of the day. After a quick stop at the Chevron, we took the lane on the bridge (there is a sidewalk on THIS bridge) and made haste to cross it. We had a semi-truck wait patiently for a while before deciding to pass us using the oncoming lane. We did this ride on a Sunday mid-morning so traffic was generally light. On the Washington side, there was a little more highway riding (Hwy 197 to SR-14) but, thankfully, both highways on this stretch have a pretty good shoulder. After a couple miles, you make a left on to the gravel Dalles Mountain Road. 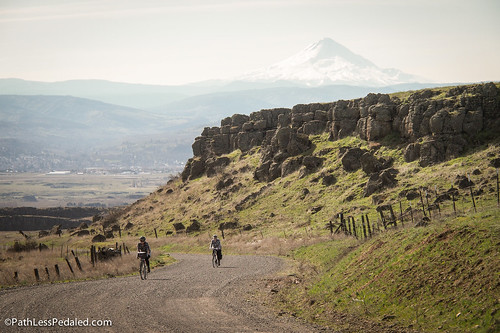 The Dalles Mountain Road is the main course of this ride.

DMR is really the main course of this ride with Old Moody Road providing a spicy little appetizer. It is a long meandering climb. The sort where you wonder if it is going to end around the next corner, only to find that it continues up from there. Fortunately, unlike Old Moody Road, the grades are less steep (mostly in the 6-7% range with a few extended 8-9% stretches). The gravel, when we rode it, was in perfect conditions. After a rain storm, it can be a tire clogging muddy mess. Kelly rode it with a group of friends last year and they had to use their tire levers to scrape off mud every 25ft. About halfway up the climb is a State Park (day-use only, parking, pit-toilet) with some access to mountain biking trails. It makes a good place for a picnic. 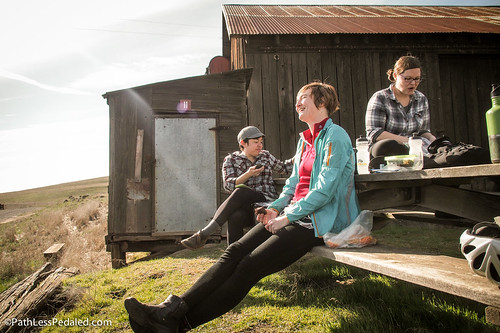 A good place for a picnic.

From there, it’s still a long grunt up to the top, but the landscape and views become exponentially better. Looking across the river, you see endless rolling hills on the Oregon side. Eventually, you reach the peak (marked by some sort of radio tower), and it is a steep dirt descent down the other side. The gravel on THIS side was a lot thicker and sketchier. Once you reach the bottom of the dirt descent, there are a number of paved and unpaved country roads to navigate until you get to the highway. 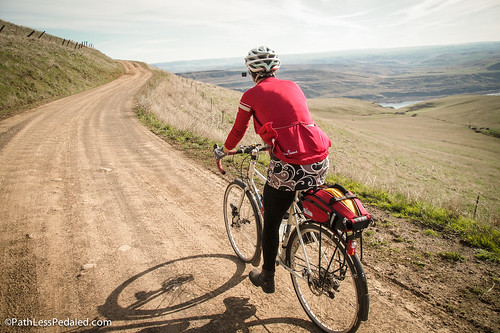 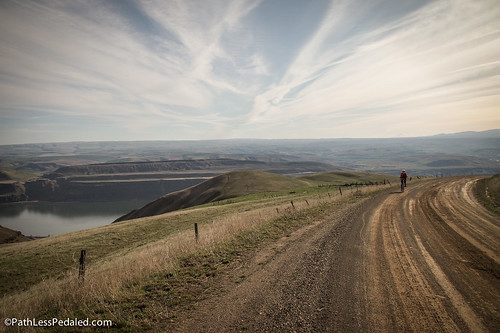 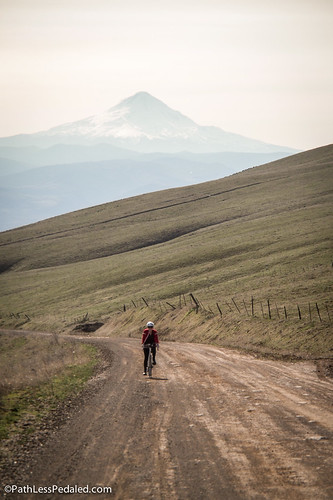 Mount Hood has your back on most of this ride.

By this time on our ride, it was starting to get dark. We were going at a meandering pace and were now trying to get back to the Oregon side before dark. It’s a good idea to have lights and a mirror for this stretch of the ride. We bombed down Hwy 97. Thankfully, the traffic was really light. We deviated from the official route again and curtailed the Maryhill Stone Henge visit, opting for more fast descending to cross the river (hence 50-ish). Once we were at river level, we had to cross the Columbia river again to Biggs Junction. This bridge sucks. It’s narrow and there is no sidewalk. We were riding in the lane on the bridge when a semi-truck decided to pass us in the same lane with on-coming traffic. Not the best feeling to have an 18-wheeler pass you within inches of your shoulder. Jerk. The best advice for this bridge is to wait for a gap, un-apologetically take the lane, and jam across at full tilt.

We had originally planned for a snack at Biggs, but decided to jam post-haste back to Deschutes State Park and get a meal in the Dalles. From Biggs, it is a straight shot on a frontage road back to the state park. On a windy day, it would suck, but we had been fortunate all day. We made good time and made it back to the vehicles just before it got too dark to see.

This ride has a bit of mythic status with Portland area riders. It is definitely an amazing route with some challenging climbs and rewarding vistas. Some of the views you see are simply unreal. The two bridge crossings and the highway descent are the sketchiest parts of the ride, but are thankfully short. It is a good idea to bring everything you need to be properly fed, hydrated, and fix your bike on the route. Windy or wet days will increase the difficulty of the route exponentially. There is little shade so bring sunscreen or long sleeves. The Vayas handled the terrain beautifully. We run a mountain double (40-28) in the front and a 12-36 cassette in the back, so were able to spin up everything. The 28mm tires were the right tire for about 80% of the ride. There were some soupier sections where we could have gone a little wider but, for the most part, 28mm was an ok choice. Disc brakes were definitely great for keeping our speed in check (especially on the highway downhill), but rim brakes would be fine too. Starting this ride from Deschutes State Park, we feel, is an awesome way to tackle the ride. You dispatch the steep Old Moody Road when your legs are fresh and the miles at the end of the day are generally rolling to downhill. If you’re visiting Oregon and are looking for a great mixed terrain ride that gives you a taste of the drier parts of the state, then definitely do this ride!