Bend, OR is generally considered Central Oregon’s bicycle capital. It has a great cycling culture, plethora of bike shops, and easy access to both mountain bike trails and great road rides. However, this past weekend we explored a town not too far away from Bend that we feel has the bones to be the next adventure bike capital of Central Oregon – Prineville.

Prineville is already on the map, so to speak, for bicycling. It is directly on both the Adventure Cycling TransAM route as well as the Oregon Outback. It has a great local brewery, Solstice Brewing Company, and most recently a local bicycle shop again, The Good Bike Co. Several community members are aware of the potential of bicycle tourism in Prineville, as seen by a recent Ford Foundation leadership class choosing bike racks as their signature project. In Prineville, all the ingredients are finally coming together.

We’ve spent a little time in Prineville, but haven’t really delved deep into the cycling in the area until this weekend. We decided to ride one of the RideWithGPS Ambassador Routes in the area called the North Star that was mapped out by James at The Good Bike Co. It is a 45-mile loop starting and ending in downtown Prineville, and traversing fantastic country roads and mixed terrain in the local Ochoco Mountains. We were joined by Laura’s brother and sister-in-law, who are Bend residents and also curious about the riding possibilities out of Prineville. 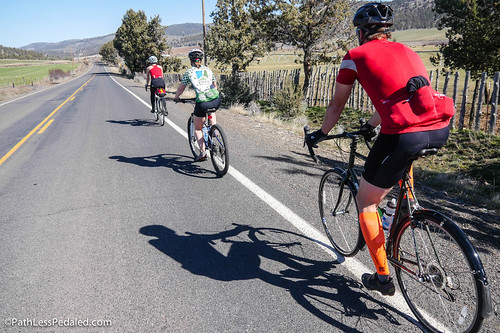 We started at around 11am from Good Bike Co and rolled North on Main St, which eventually becomes McKay Rd (pronounced “mc-KAI” by the locals). Main St has an ample bike lane out of town, which we appreciated. After passing some businesses and residential areas, the land opens up considerably. You find yourself surrounded on either side by ranches and farms. By mile 5, you are on a gentle country road that looks as pastoral as anything you’ll ever see. The traffic was extremely light and the few cars that passed went out of their way to pass safely. 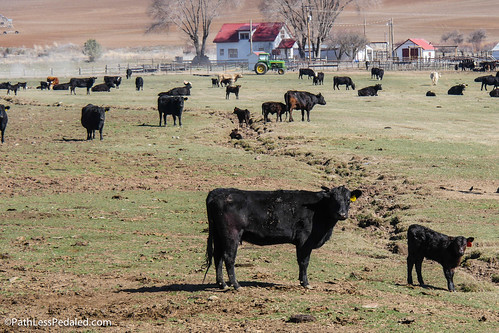 Cows always look like they’ve never seen a bicyclist before.

The fun starts at around mile 13 when you are on NF-33 and the pavement turns into dirt. The road surface on the ascent was pretty hard-packed and surprisingly smooth. Laura rode 28mm Panaracer Gravel Kings which have a fairly fine file tread pattern and didn’t have a problem. The only tricky part was near the summit where the road was wet from melting snow. It made for a tacky surface. If we had wetter conditions, it wouldn’t have been as pleasant, since we no doubt would have been slogging through a lot of mud. The climb was pleasantly shaded and ran alongside McKay Creek that was flowing with water. James told us that it is seasonal and generally dries up in the Summer, so its not a reliable source of water later in the year. You’ll also notice quite a number of primitive camping areas along the road (mental note for future bike tours in the area). 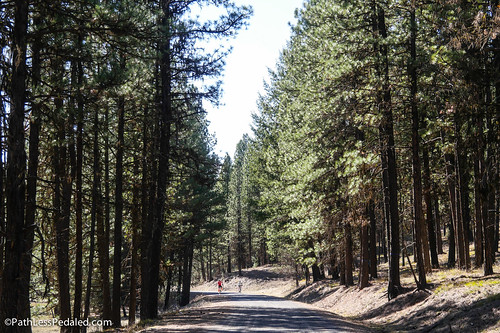 Most of the climbing is done with plenty of shade, a welcome respite from the sun during the summer months. 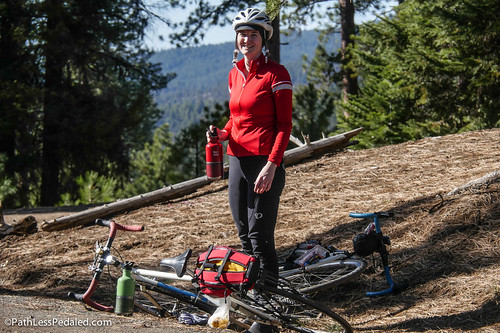 Taking a break at the top.

The descent was fun and fast. It is on the downhill that you finally get a few views of the surrounding mountains, so be sure to stop and take it in. Just before we hit pavement again we passed Wildcat campground, an established Forest Service campground with a vault toilet and supposedly drinking water (as per the Forest Service website), although we didn’t confirm it. As you make your way back to civilization, you’ll pass an impressive monolith of rock known as Steins Pillar that juts out above the treeline like a prehistoric skyscraper. 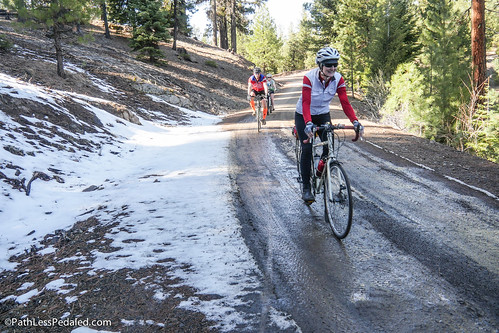 Ran into some snow at the top. 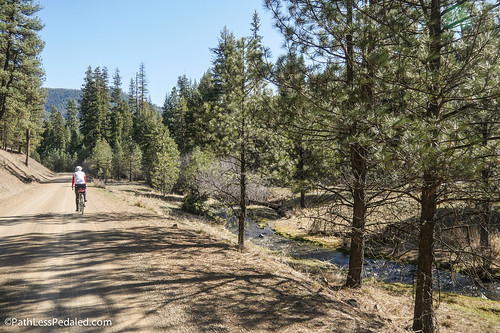 The descent was fast and fun on hard packed gravel. 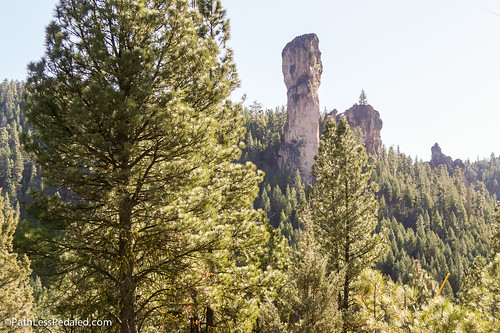 The odd site of Steins Pillar.

At about mile 31, you’re back on a paved country road that gently descends towards HWY 26. Once you hit the highway, it is a straight shot back into town. There is generally a pretty good shoulder the whole way. If it’s hot or if you are running low on drinking water, a stop at the reservoir is in order.

This was one of our first longer rides in the greater Prineville area and we were pretty impressed with how quickly you could get out into the wilderness on your bike. While Prineville isn’t the first bikey town that leaps into your head when you think of Central Oregon, we did see a handful of other cyclists on the road (we even spotted a group wearing some jerseys from a Bend bike shop). This route is great for beginner to intermediate riders. The elevation is gained pretty gradually except for a few stretches of 7-8% near the top. Once you are pass the summit, the route is generally trending downhill, giving your legs a rest. It’s the perfect length for a day ride in the area if you are passing through town. 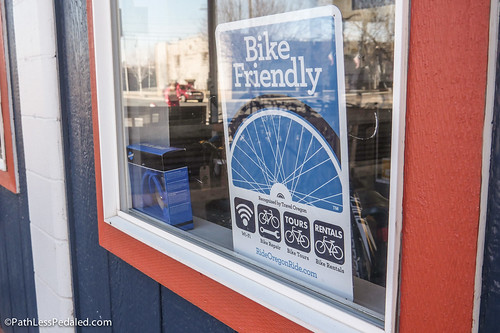 While in Prineville, we got a chance to talk with James and Natalie, the owners of the The Good Bike Co. The shop is centrally located and the building used to be an old car service station. Because of this, there is a huge outdoor awning which provides shade for the outdoor seating. The Good Bike Co. is a next-wave bike shop, serving beer and coffee, in an unlikely place. They have a great outdoor patio where James envisions many a cross-country bike tourist or day rider will find themselves after a long ride. 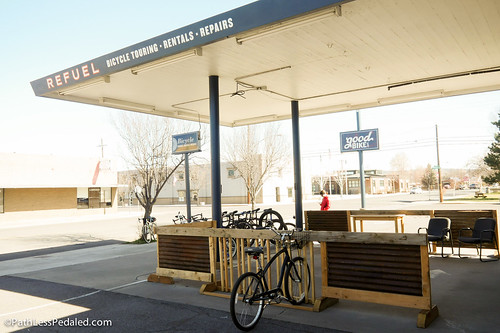 Great shaded outdoor patio. This will be the spot to hang out during the touring season.

Although the shop isn’t even a year old, James is finding himself busier than he thought he would be. Since he has opened, locals have been bringing their bikes to be repaired in droves (the unseasonably nice weather has jump-started the riding season). While he is focusing primarily on repairs and service, he has also found himself selling a lot of hard tail mountain bikes to local residents. The local mountain bike advocacy group, COTA, has been hard at work creating a new 3-mile mountain bike trail that you can easily access from town. Since this resource is so close to downtown and doesn’t require a long drive to get to, a lot of Prineville residents have either been dusting off their old mountain bikes or buying new ones. 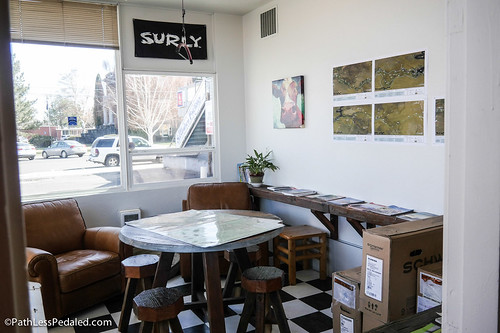 The Adventure Planning Room at the Good Bike Co.

James hopes to cater to touring cyclists on the TransAm as well as the growing adventure bike segment. He is carrying some pretty interesting products, from Bartender bags from Randy Jo to frame bags from Revelate. Out front, he has a few fat bikes and even a Surly Straggler for rent. He and Natalie are also looking to put on a 100-mile gravel race later in the year! 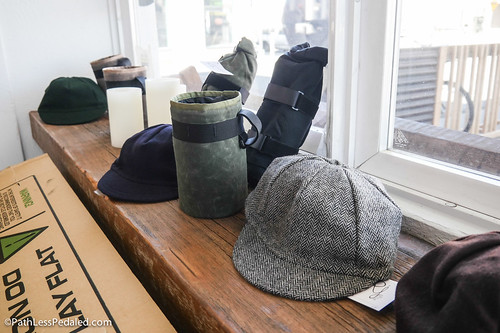 Cool to see some handmade gear from Randy Jo Fab in the shop.

Beyond just operating the bike shop, James and Natalie are also looking at the bigger picture and the potential of bicycle tourism in Prineville. James actively attends the local chamber meetings, is part of a proponent group for a potential Scenic Bikeway, as well as working with other businesses to figure out ways to combine agritourism and bicycle tourism in the area. 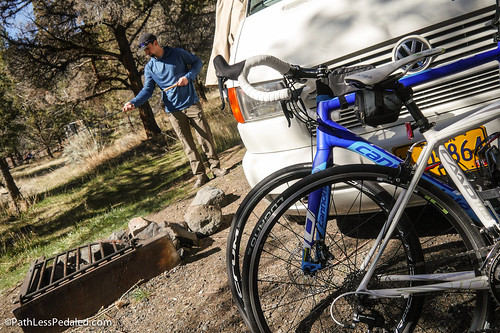 Is Pedaling in Prineville’s Future?
We’ve always had a soft spot for Prineville. We had a great welcoming experience as bike tourists there when we were on the TransAm 3 years ago. Since then, we’ve passed through a few times and have always thought that there is great potential for the town to capitalize on bicycling. It seems as if, with the addition of a new bike shop and leadership excited about bicycling, this might be the time for Prineville to create a strong cycling identity and give that other bike/beer Central Oregon town a run for its money.