Rode Trip: Portland to Cascade Locks (with a little gravel and a side of corned beef hash) 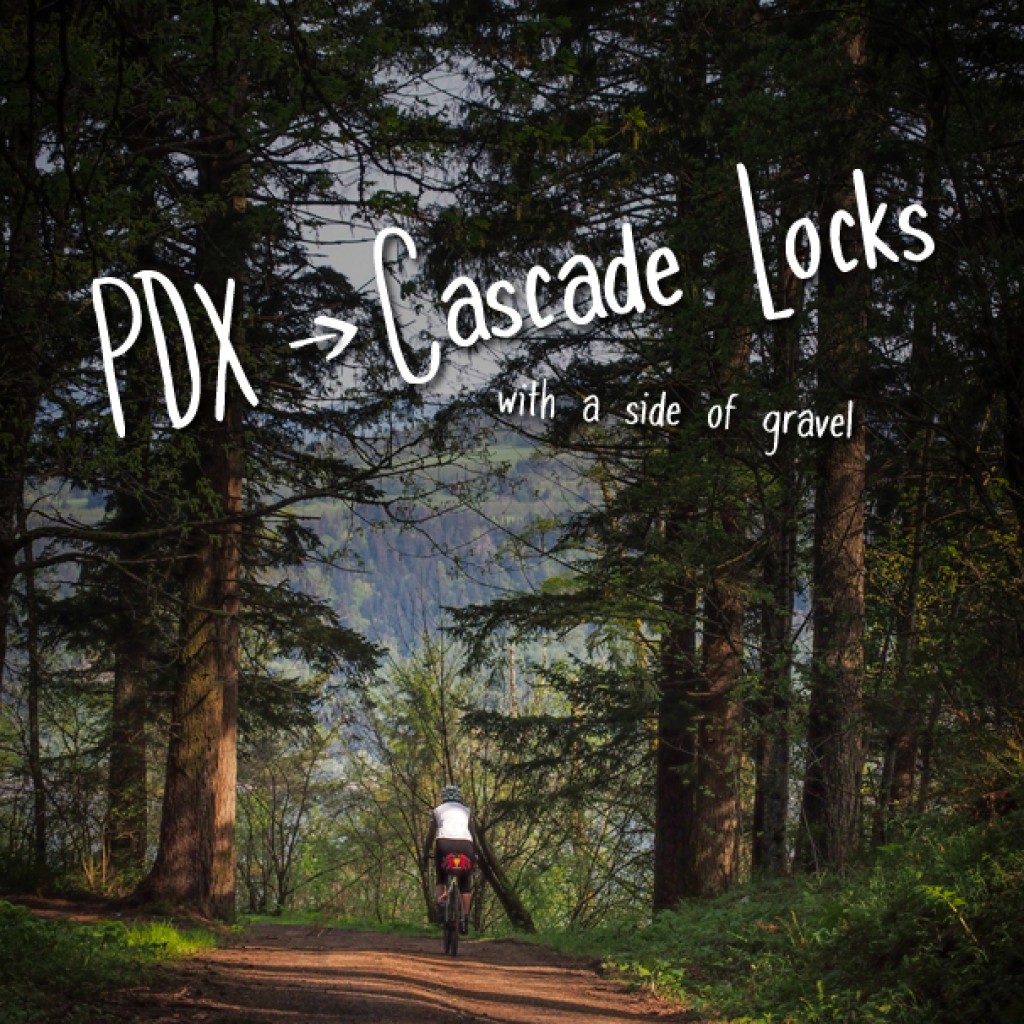 One of the classic bike rides in Portland is to ride portions of the Historic Columbia River Highway, a 73-mile scenic stretch of road that was once the only way from Portland to points East in the Columbia Gorge. It was designed with the road user’s aesthetic experience in mind, with twists and turns and slowly-revealed vistas. In the 1950s, it was replaced with I-84 and large segments of the highway were destroyed, while other parts were orphaned in the woods. There has been a push over the last two decades to reconnect the remaining sections of road with a state trail corridor. The 73 mile trail corridor is ALMOST complete, but the hardest and toughest 10 miles remain. 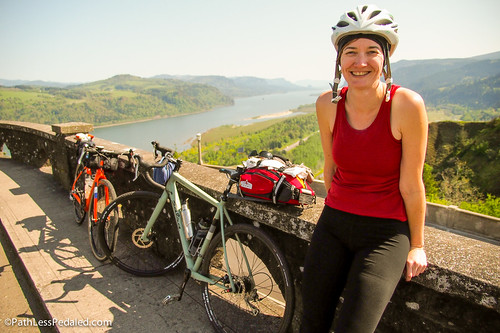 Enjoying the view from Vista House.

Today, you can ride from Portland to the town of Cascade Locks with relative ease (you COULD ride further, but have to navigate some pretty gnarly sections on the shoulder of the interstate). Cascade Locks is notable in that it is one of the few towns that the Pacific Crest Trail passes through. Over the years, the town has begun to embrace its outdoor recreational assets. It hosts an annual Pacific Crest Trail Days Event and even boasts a new mountain bike park, the Easy Climb Trail, on the outskirts of town.

For this trip, we took a slightly different route out to Cascade Locks. We have been itching to take our Warbirds out on a quick overnight and saw it only fitting that they see a little gravel en route. Less known to motorists but popular with Portland cyclists is Alex Barr road, a lightly trafficked gravel road that rises steeply from the Historic Highway towards Larch Mountain. 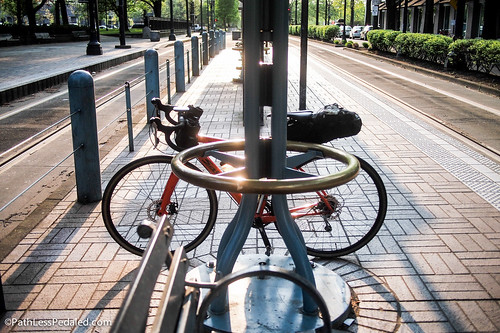 Awaiting the MAX to bypass a lot of uninspired urban riding.

We wanted to get to the GOOD riding as quickly as possible so we got up relatively early and took MAX to the end of the line in Gresham. About 15 minutes from the transit stop, we were out in bucolic country, crossing the Sandy River and on the Historic Columbia River Highway. 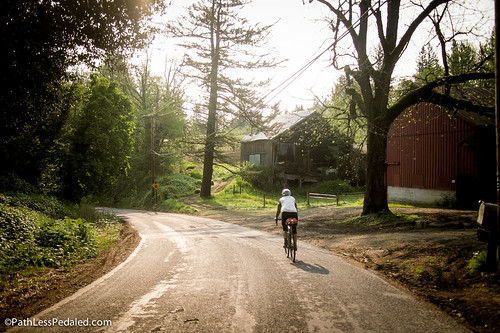 Sweetbriar Road descending down to the Sandy River.

From this point on the Historic Highway it is a steady climb passing through the small communities of Springdale and Corbett. Shoulders are of varying widths, but traffic is generally light and the road sees LOTS of cyclists on the weekends. Any last minute snacks you want for the ride you can pick up at the Corbett Market (the market makes a great lunch time stop on the return trip, especially if you like bbq and fried chicken!). The owners are welcoming and pay to have a portaloo maintained outside for passing cyclists. Whenever we pass by we always make the point of buying something and letting them know we appreciate what they do. From there it is a short ride to Portland Women’s Forum, a little plot of land that was protected from future development by a group of women that banded together so that the views would always be publicly accessible (that’s just how they roll in Oregon!). 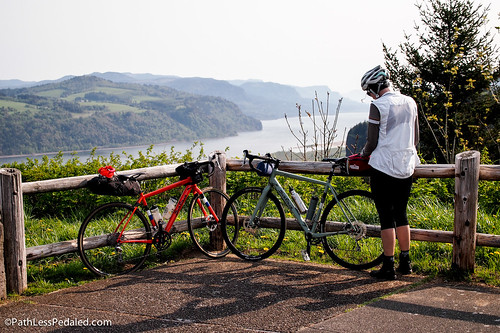 The view from Portland Women’s Forum, definitely worth protecting for the public.

Typically, from Portland Women’s Forum, we would usually crest the last little bit of hill and descend to Vista House and continue along the Historic Highway. On this trip, we took the right hand fork on East Larch Mountain Road. After about 3 miles of climbing, we made a left turn down Haines Road, which turns into a fantastic twisty descent to Latourell Creek, only to climb slowly back up again. 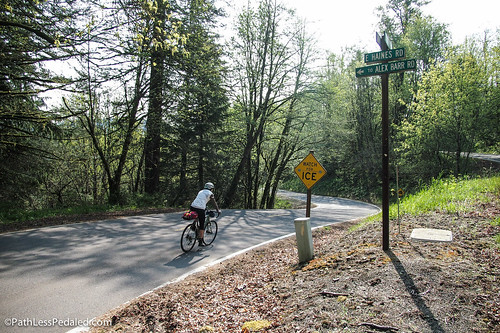 After mostly climbing, we finally get some descending… 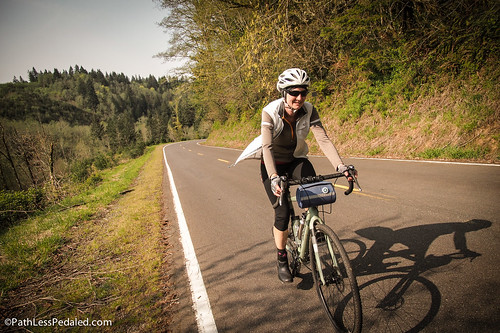 Only to do more climbing.

Eventually, we hit the intersection of Haines and Alex Barr and the fun began. All this work to ride a short stretch of dirt road. Was it worth it? Heck yes. It is immediately unpaved and drops down to to Historic Highway with a vengeance (lets just say we were glad to be going down the hill with our overnight load on this trip). It twists and turns beneath a tall canopy of trees, offering the occasional view out to the Columbia River. It was a real treat to ride, not only because it was unpaved, but because it gave a different perspective of the Gorge from just riding on the Historic Highway. You forget that people live in the hills or that the Gorge is more than a giant rock face constantly at your side. 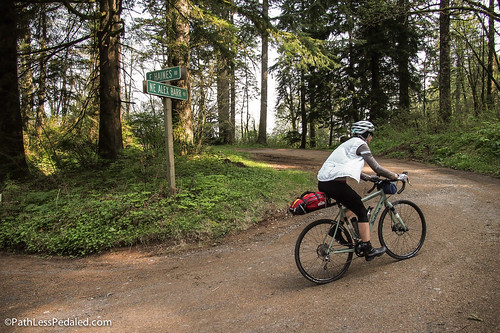 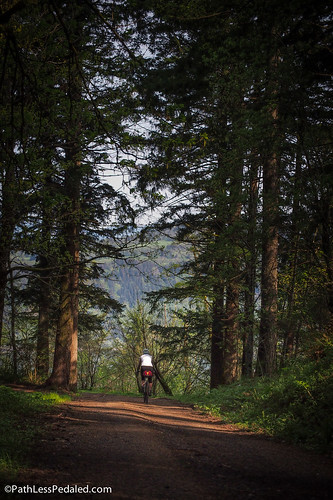 Totally worth the climb. 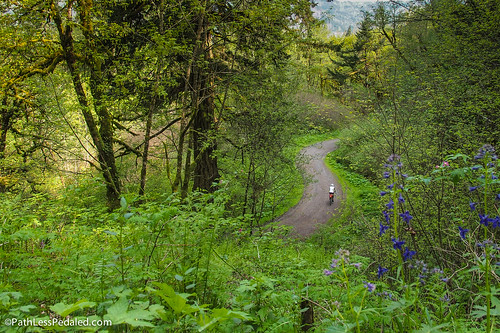 Loved how the road would wind on itself.

This was our first ride with extra gear on the Warbirds. I was borrowing a friend’s Pika seatbag and Laura was using an Arkel Randonneur Rack and Tailrider bag. We had hoped to camp, but our current sleeping bags, pads and tent aren’t quite small enough to work in a bikepacking setup, so we decided to stay indoors and just pack a change of clothes (and some coffee making gear of course). 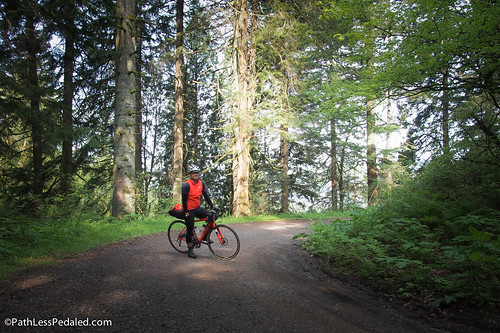 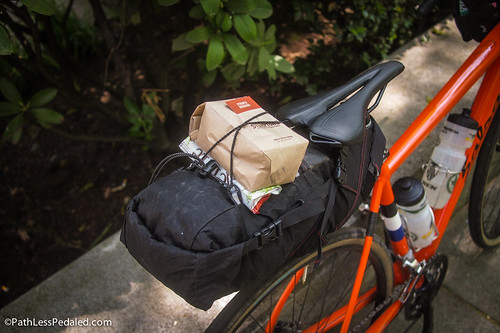 Trying out the Pika. Packed some essentials 🙂 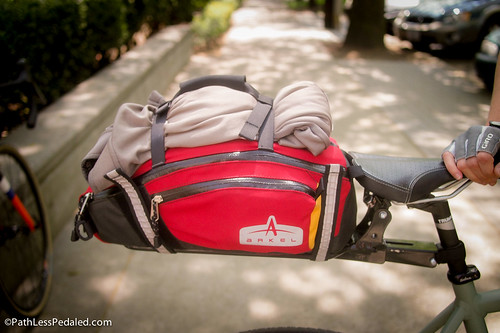 The Warbirds ride like fast road bikes on pavement, but have the compliance and predictable steering for the rough stuff. The disc brakes were awesome on the descents. If there would be anything we would change on the bikes, it would be to switch to brifters that use internal routing that won’t interfere with a handlebar roll, and a little bit lower gearing. The low gear was 34×30, yielding about 29 gear inches. With our load on the climbs we were almost always at the bottom of our gear range. For longer, extended dirt climbs with gear, we would definitely want to go lower. Future upgrades would be Apex brifters, SRAM’s 48-32 trekking double and a 36t cassette in the rear. 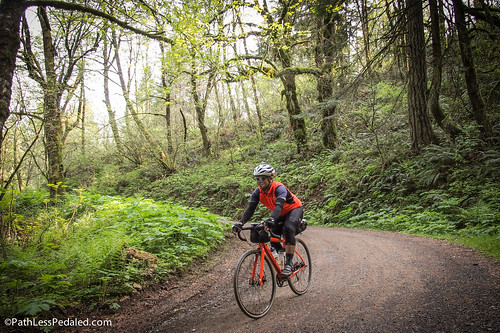 After Alex Barr, we were back on the Historic Highway. While not as exotic after something like Alex Barr, it is still a great ride. Traffic was still fairly light and we rode fast through the undulating terrain to Multnomah Falls. Generally, we try to get pass the falls before noon before traffic gets crazy. Perhaps the least pleasant stretch of the Historic Highway is a few miles on either side of Multnomah Falls. Heading East, once you past Ainsworth State Park, most of the motorized tourist traffic that was visiting Multnomah will have dissipated by then. 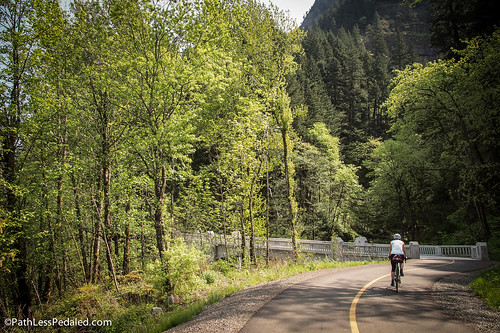 The new bridge across McCord Creek.

Eventually, you reach the paved trail section that is free from motorized traffic and it is smooth sailing into Cascade Locks. The new section of trail is wonderful, with several bridge crossings. It’s hard to imagine that not too long ago you had to endure riding on I-84 to get to Cascade Locks! 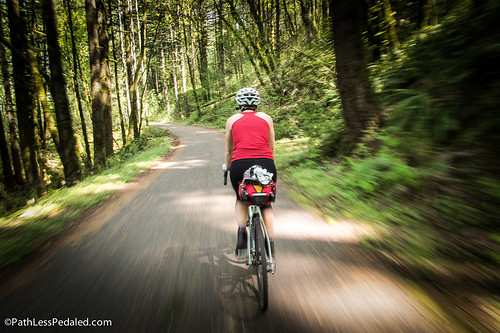 In the final stretch of trail to Cascade Locks.

The first order of business when one enters Cascade Locks is to go to the East Wind, a tiny throwback drive-in known for its soft-served ice cream. Fortunately, the line wasn’t too long and we ordered some bacon cheesburgers, because science. After protein-loading, we checked in to the Columbia Gorge Motel to get cleaned up and head over to Thunder Island Brewing. If you want to camp, you’re in luck, because the camping option in town is literally a stone’s throw from the brewery as well. 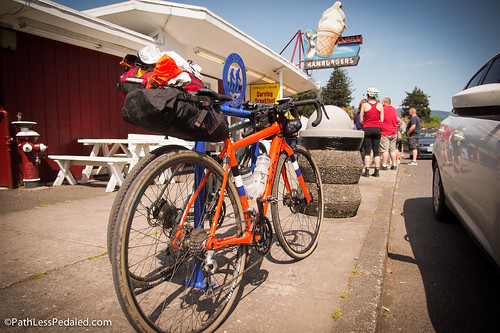 If you’ve never been, having a beer in the outdoor patio of Thunder Island Brewery might seriously be the best place to have a beer in the Gorge. You’re far enough away from the main drag to not hear the traffic, a grove of trees provides shade in the middle of the day and you look out directly to the mighty Columbia River. The owners are also avid bike tourists themselves (they helped to spearhead getting the fancy new bike racks you will see all over town), and they have racks conveniently positioned in a place of honor right at the entrance. After a few beers, we had dinner at Cascade Locks Ale House (another bike friendly business) which has solid pub food and lots of craft beer on tap. Bike touring tip: they have an outside patio in the back where you can eat and watch your bike if you didn’t arrive with a lock. 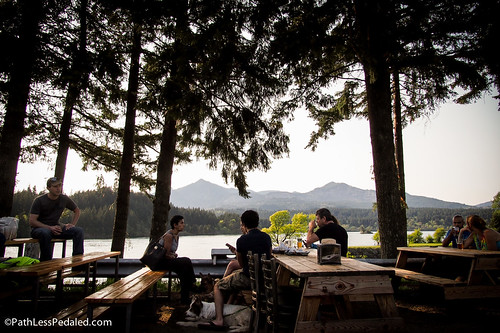 Who needs a big screen TV with sportsball when you’ve got a view like this?!

We got up early the next morning and got ready to head out of town, but not before we stopped to get some of the best corned beef and hash in Oregon at the Charburger. I know that’s a bold statement, but every time we’ve had the opportunity to have breakfast there, it does not disappoint! Also, the views of the river from inside are pretty remarkable. 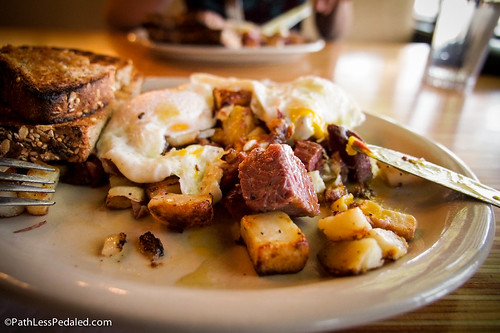 We pedaled out of town well-fueled and backtracked along the Historic Highway to Gresham. This of course included the climb up to Vista House and Women’s Forum, which actually aren’t too bad on lightly-loaded bikes. We got to the MAX station at around noon and by around 1pm we were back at our apartment. 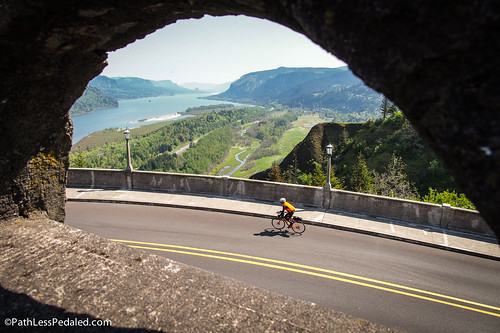 Channeling Alberto Contador on the final push up to Vista House.

If you’re visiting Portland and have the time to either go out for a long day ride or want to do an overnighter in one of Oregon’s iconic natural wonders, this is your ride. You get a little flavor of the small communities along the way, ride on a historic highway that became the model for the nation’s National Park roads AND end the day with a cold beer with a view!

Riding Tips:
-If you choose to take the gravel option and are on loaded bikes, a minimum of 28-32mmm tires are recommended.
-To avoid the traffic at Multnomah falls, leave early and plan to pass through that section before noon.
-If you have a flexible schedule, ride it mid-week and you’ll have the roads mostly to yourselves.
-Things you have to eat: soft serve at East Wind, beers on the patio at Thunder Island Brewing, burgers at Cascade Locks Ale House and corned beef hash at Charburger!
-Don’t have a “gravel bike” or fancy bikepacking bags? No problem. The Mountain Shop is now renting bikes and all the doodads to strap to your bike.

For more bike travel ideas, check out other posts in our Rode Trip series!