Rode Trip: Bikepacking and Flyfishing on the Deschutes River Trail

People write and talk about the salmon fly hatch on the Deschutes River with near religious awe. It’s a time when strange, two inch, orange insects emerge and line the grasses on the banks of the river in biblical proportions, causing large and usually wary trout to throw caution to the wind and feed on the surface with the desperation of the last call at Old Country Buffet.

Or that’s what they say, at least. 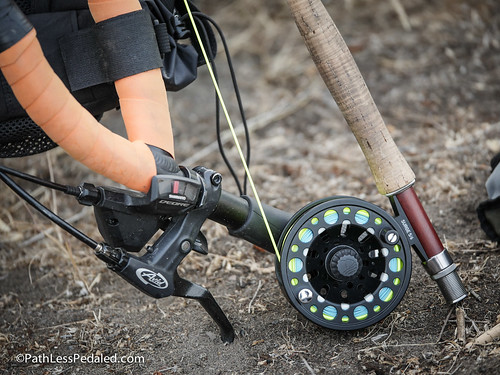 While a hundred or so cyclists were voluntarily flogging themselves in earnest in the first Oregon Outback along gravel backroads not too far away, Laura, our friend Brendan, and I decided to go on a little gravel outing of our own, combining fishing and bikepacking. As we were gearing up at the parking lot at Deschutes State Park, Brendan even came up with a hashtag for our trip: #OregonTroutback. Our trip, in the current vernacular, was now legit. 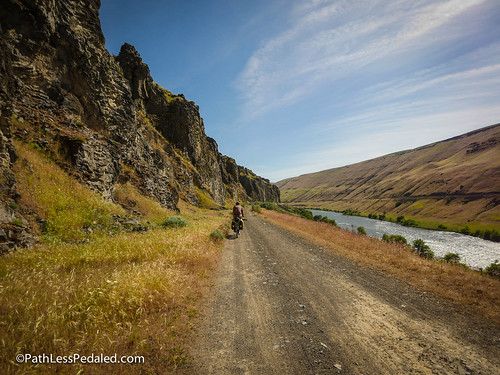 As a fly fisherman, I had been hoping to fish the Salmon Fly hatch for some time. It was one of those “famous” hatches (if bugs coming out of the ground can be counted as something internationally noteworthy). As a cyclist, I had done day trips on the Deschutes River Trail but had never camped overnight along the river. This trip was meant to scratch both itches simultaneously with vigor. Even if the fishing wasn’t non-stop reel-scorching action, what is there not to enjoy about pedaling out along a gravel trail and setting up an idyllic camp by a river?

The Deschutes River Trail is an old railroad bed that is rideable for about 20 miles. It has become the de facto proving grounds of many a bikepacking rig for Portland area cyclists since it is a relatively quick drive from downtown. Along the trail you pass a few relics of the past; some wooden railroad boxcars and an old homestead that remain in surprisingly good condition. It is dotted with a handful of campsites, mostly used by rafters and hikers. While the grade is never really difficult, there are a few things out there that will keep you on your toes, namely goatheads and rattlesnakes. Goatheads will make short work of your tire and the rattlesnakes will make short work of you. 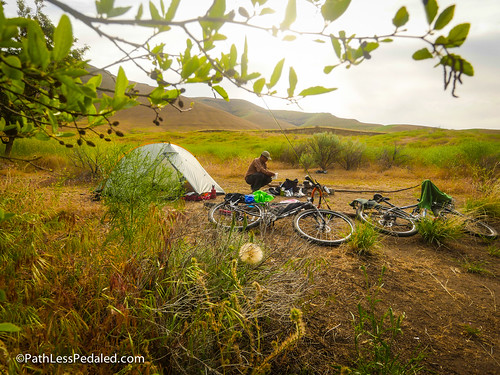 The goatheads on the Deschutes River Trail have been known to destroy many a tire. On our first ever outing there a few months ago I had underestimated their severity. When I stopped to fix a flat I had no less than thirty per tire. I ran out of patches and didn’t bring a spare tube and managed to ride out by pumping up the tires every quarter mile. It made for a long afternoon.

Our plan was to ride out to one of the campsites near the old homestead. It had a large flat area for camping beneath some trees and easy river access for fishing. We weren’t exactly the perfect picture of ultralight bikepacking with our Wald baskets and panniers in the rear, but we were carrying a fair amount of fishing and camera gear. Brendan brought along a fly tying vise to make a few streamside flies and I was packing a video monopod. We also had four rods between us: a 5wt, 6wt, and two tenkara rods.

We arrived at our targeted campsite in the early afternoon, only to find it had been claimed. There was a full on camo tarp city set up by two beer-bellied guys who clearly had no intention of sharing the space. We pedaled back a few miles to another site that unfortunately didn’t have as much shade or flat space. The problem wasn’t so much finding free space as it was finding a clearing to setup camp. The grass had grown to head high since the last time we were there and we were loath to tromp around for three days in high grass in rattlesnake country. Eventually we found a little clearing that had space for Laura and I to set up our tent and suitable trees for Brendan’s camping hammock. 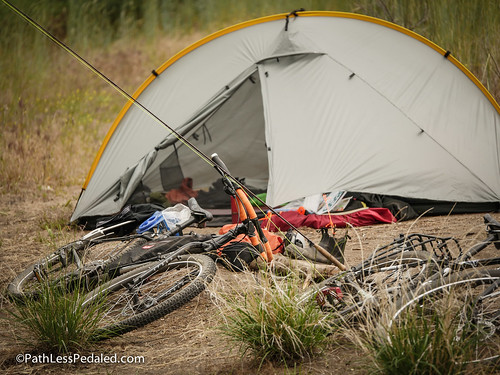 After a hastily made lunch, we got down to the business of fishing. Instead of packing heavy wading boots and waders, we were planning to wet wade using neoprene socks and cleated water sandals. For the most part it worked beautifully. The neoprene socks kept your feet just warm enough so you could stand in the water for hours and the cleated sandals gave you some purchase on the slimy rocks of the Deschutes.

We strung up our rods and waded into the water. For me, the first hour or so of fishing is about calming down, settling into the river, and starting to read the water. The water was flowing at a good pace but was fairly shallow. You could walk out about forty feet and still be in waist deep water. I spotted a few obvious places that could hold fish: boulders that were creating some softer water, a few spots on the bank with low overhanging trees that made for good cover, and a few slow, dark, and mysterious runs. All the ingredients of good fishing were there, except for any obvious signs of rising fish and perhaps most importantly, the salmon flies. 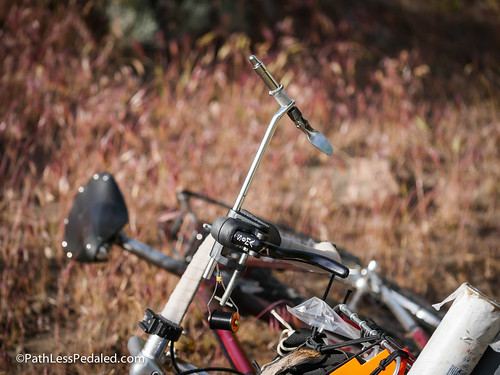 Thinking that we hadn’t quite clued in on the schedule that the fish and flies were on, I tied on a hopper-dropper setup, which involves fishing with a dry floating fly and a small subsurface fly below it. For me, It’s a good searching pattern when I’m trying to figure out a stretch of water. Brendan was fishing downstream, working the bank over with some golden stone fly patterns he had tied the week before. We worked our way up and down the river, occasionally glancing over to see how the other person was doing.

It’s not that we didn’t get into any fish, it just wasn’t the white-hot fishing action we were expecting. I got into two medium sized white fish and a third mystery fish that
broke off. Brandon got into a few small sized redsides that he eventually let go. We debriefed over dinner and bourbon and planned the next day’s tactics. 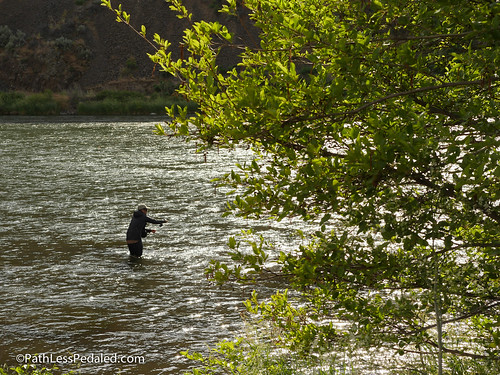 That night a storm rolled in that would refuse to leave completely during our three days on the river. Fishing became a Sisyphean task of casting against 20mph winds. It was not exactly the delicate dry fly fishing we had imagined. I resorted to what was the equivalent of carpet-bombing the water. I switched lines to a shooting head, tied on a sinking tip, and swung flies through wide swaths of water, methodically covering every inch looking for fish. I looked over and saw Brendan, ever the optimist, double hauling dry flies through the wind to the bank. By the end of the second day we were exhausted, having tried everything but chumming the water to get into fish. It was then, when I was leaving the water to go back to camp, that I saw my first rattlesnake slithering across a footpath that I had used over a dozen times during the day. It was a slow and sinewy reminder to not get lazy in the backcountry. 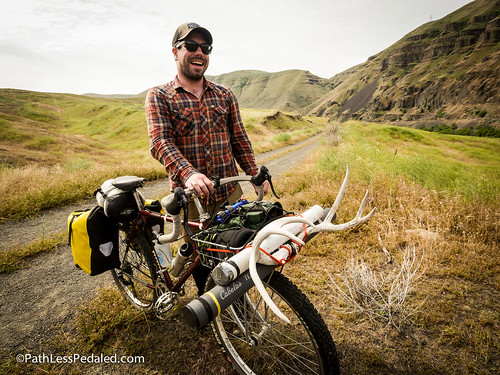 On our final full fishing day we got on the bicycles and rode up and down the river looking for promising water. Everywhere we went felt like a fish ghost town. There were all the structures that make good fishing water, but no fish and no salmon flies. We chatted with some people hiking and fishing the trail who had no luck either. It was as if the hatch had already blown through like a mad tornado of two-inch orange insects a few weeks ago and all the fish were following it like kids and an ice-cream truck. We spotted hundreds of dried up husks of salmon flies on trees at one campsite that confirmed our suspicions.

We took it all with a grain of salt, and plenty of bourbon. That night at camp, Brendan produced an orange and some bitters and made some Old Fashioneds. It’s hard not to get philosophical when you go on a fishing trip and don’t catch very many fish. In fact, it’s probably the only thing you can do and keep your sanity. We all agreed that, at best, we came away catching a few fish. Not as many as we had hoped for (or as large), but neither of us got skunked. At worst, we had just enjoyed three days biking and camping on one of the iconic rivers of Oregon with nothing else to do but ride, cook over our stoves, and go fishing. 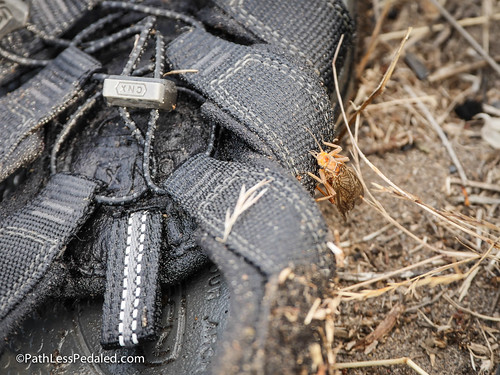 Incidentally, we did actually see a salmon fly. On the final morning as we were packing up, Laura said, “I think that’s it. That bug!” I looked over to where she was pointing and sure enough, sitting on my Keen sandal and looking a little worse for wear, was a solitary salmon fly. I pointed it out to Brendan who in a rare instance of losing his cool exclaimed, “Sonofabitch! Let’s throw it in the river!”