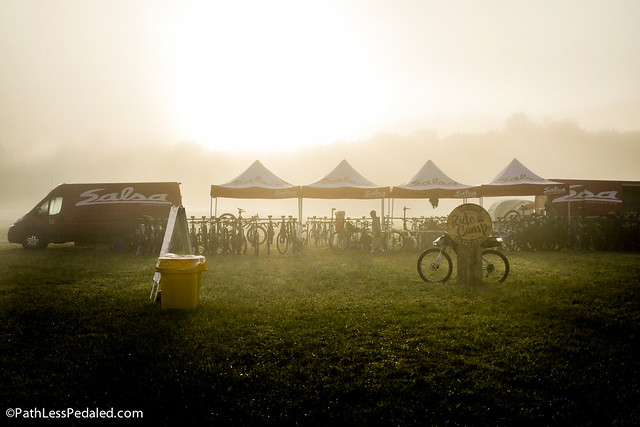 Imagine summer camp… complete with mess halls, campfires, s’mores and bikes… really really nice bikes. And instead of ghost stories, you get enthralling tales of riding the Tour Divide race or attempting a fat bike expedition in Alaska in bad weather and dwindling food, and you’ll get a sense of what Salsa RideCamp was like! 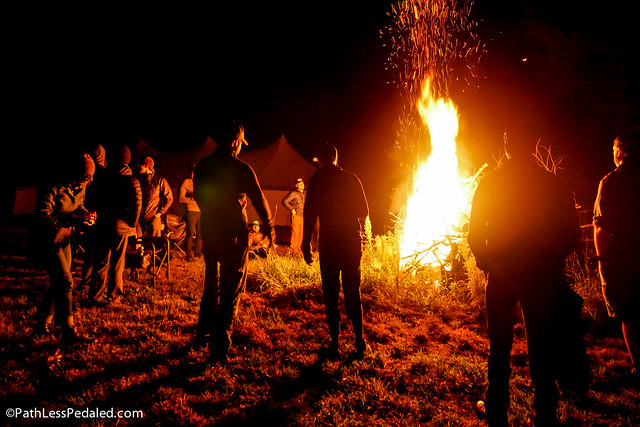 RideCamp was held just outside of the tiny community of Seeley, WI in an open field that serves as event space for the famed Birkebeiner event. This was a first for Salsa, who has usually held events for dealers like Frostbike and Saddle Drive, but has never had one where they can speak directly to the people who are riding their bikes. As a bike nerd, it was the perfect opportunity to talk to their engineers and bike designers about every nuanced detail of their bikes. And everyone was really approachable. Maybe its a Mid-Western thing, but all the staff was really friendly and there was none of the bike snobbery we’ve seen at some other bike events we’ve attended. 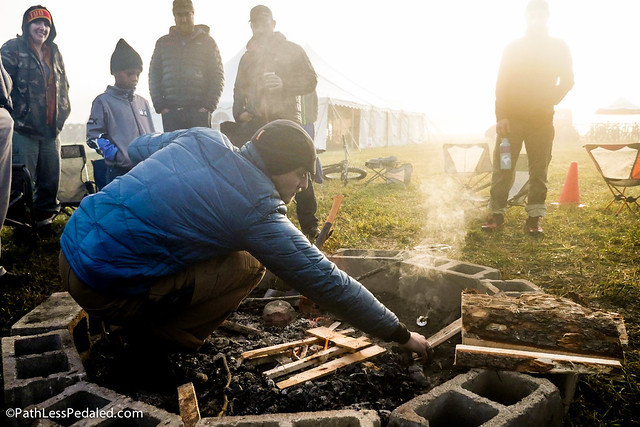 Getting the morning fire started. 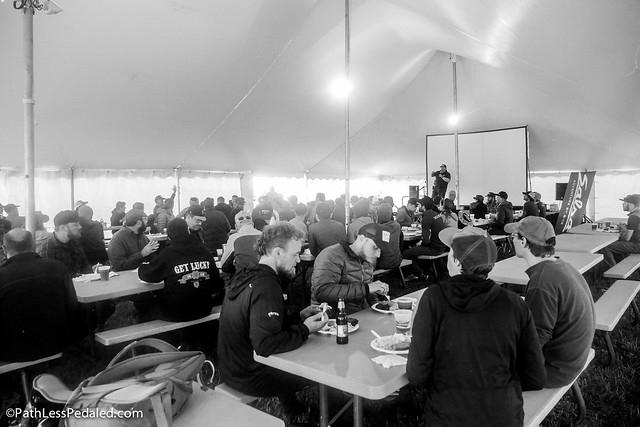 Group meals in the mess hall.

Each day of the three-day event, there were multiple mountain bike and gravel rides. They were all at a nice casual pace that gave you a chance to stretch the legs, try out the new bikes and chat with fellow ridecampers. We partook in the gravel rides, which followed nice rolling terrain through the North Woods, with little-to-no car traffic. Some of the roads were barely large enough to fit a single car! 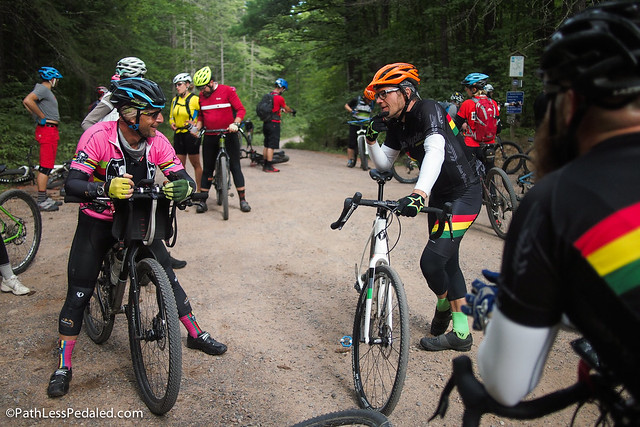 Riding and chatting with Jay Petervary. 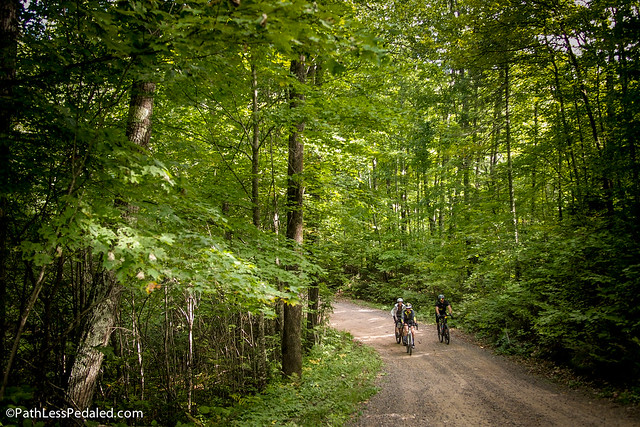 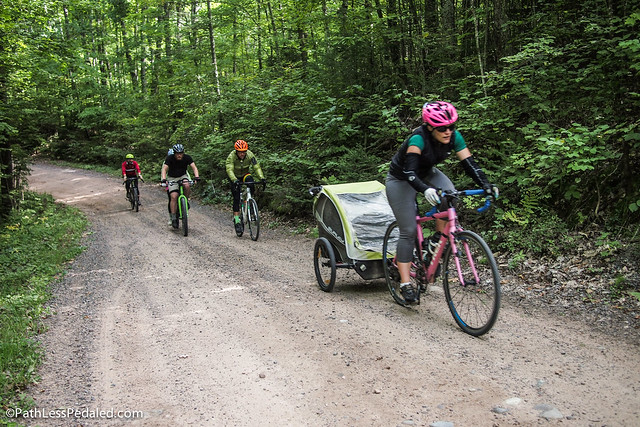 Gravel riding mom crushing it with the trailer!

RideCamp ended every evening with a presentation. We heard from Jay Petervary about the behind-the-scenes action of this year’s Tour Divide race, the closest and fastest finish in the history of the event! Jay told us about the hazards of “sleep biking,” where you ride (and sometimes walk) with your bike in utter exhaustion and sleep deprivation while weaving all over the road. We also heard from Bjorn and Kim about their Ring of Fire expedition in Alaska. Bjorn and Kim had mapped out an ambitious route that combined both fat bikes and pack rafts, but were thwarted by rough weather and lack of food. Both evening presentations were riveting and made you forget that the temps were hovering in the 30s. In addition to the evening programming, there were also great daytime presentations on gravel riding and packing for bikepacking or biketouring trips. 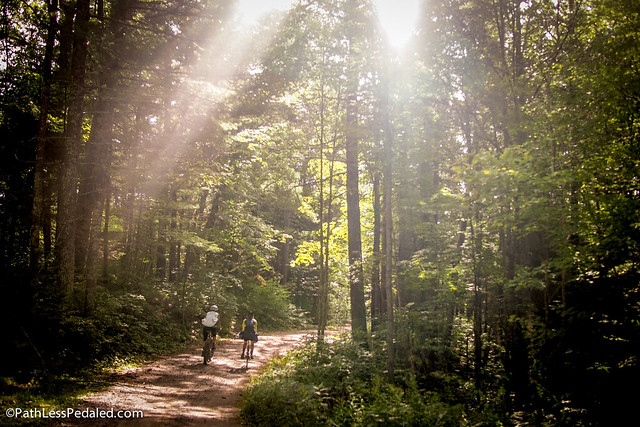 Deadwood
Of course, one of the reasons we wanted to attend was to throw a leg over some of the new bikes (a few of which haven’t made it to dealers yet). Specifically, I had my heart set on trying out the Deadwood, Salsa’s new supersized Fargo with 29+ tires. 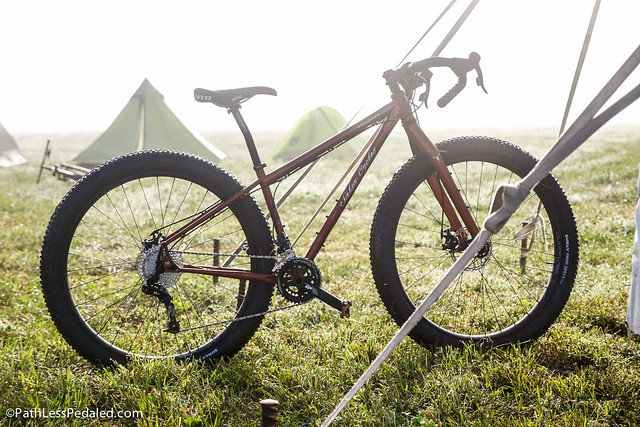 All the Deadwoods in existence were at this event (production runs haven’t shipped yet) and I was the first to break in the size small. It’s the sort of bike you take when you’re not quite sure what sort of road conditions you’ll encounter, but aren’t riding on snow or extended sandy stretches. For me, it was the first time riding the 29+ tire size and I was surprised how much I really enjoyed it. The big tires are confidence-inspiring, especially on sketchy washboard descents. Despite the wider tire width, the handling is playful and it is a decent climber. 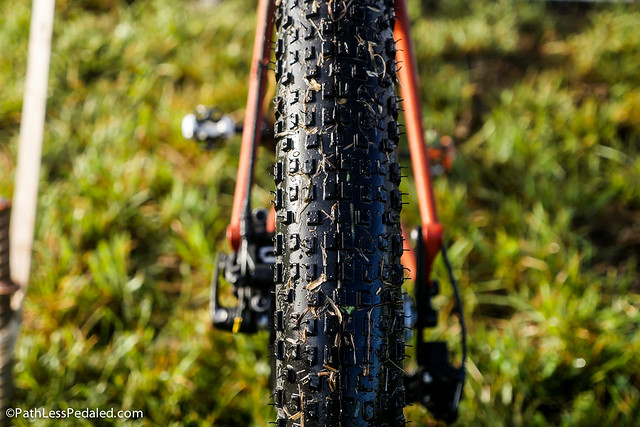 Fat. But not TOO fat.

We don’t usually ride extended snowy or sandy stretches, so a fat bike doesn’t make sense for us, but the 29+ size is perfect for taking more exploratory forest service roads and trails. Even Laura, who was a bit skeptical in the very beginning, came around and was bombing down hills with a smile on her face.

RideCamp was great for a first time event by Salsa and we are looking forward to seeing what they do next year. We really appreciated how mellow and approachable all the staff were and also enjoyed meeting new people and even some blog readers! We were also blown away by the bucolic rolling Wisconsin countryside that the event was held in and are making plans in the future for further exploration.