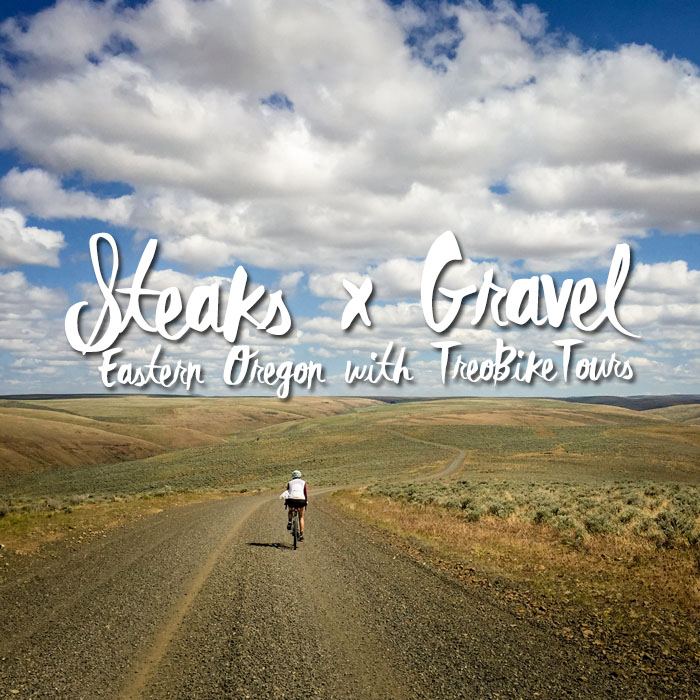 Eastern Oregon is beautiful and rough country. It will steal your heart with its sublime landscape and make short work of your derailleur and tires at the same time. We learned that lesson last year when we went out to Treo Ranches with a group of friends. This year, we were determined to complete our trip out to Treo with our bikes intact.

For those that aren’t familiar, Treo Bike Tours is the brainchild of Phil Carlson, a former wheat and cattle farmer turned birding hunting lodge operator turned bike tour operator. In the country, everyone wears different hats to make a living. Phil’s philosophy of business is that if you’re going to get into an industry, you go whole hog. That is how someone that doesn’t even ride a bike ends up taking a week long bike mechanic class at the United Bicycle Institute in Portland (pretty easy work for someone who has worked on farm equipment), buys a shuttle and trailer to carry 20 bikes and even does a tofu taste test (you’ll have to talk to him yourself to see how that turned out). 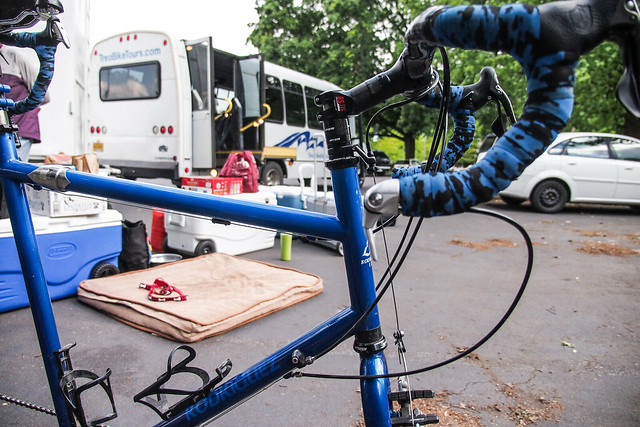 Pickup from PDX can’t be beat!

Our trip started, quite conveniently, at a parking lot in Portland across the street from our apartment. If you have a large enough group, one of Phil’s services includes a shuttle from Portland out to Eastern, Oregon. This is perfect for people that are car free like us or for large groups where driving multiple cars just don’t make sense. On this trip there, were no less than 4 tandems and 8 single bikes in the trailer as well as coolers full of beer and food for the next few days. Aside from the convenience of not having to drive, one of the great benefits is that you can just relax, socialize, go over the routes or just stare out the window as the scenery changes from city to high desert. 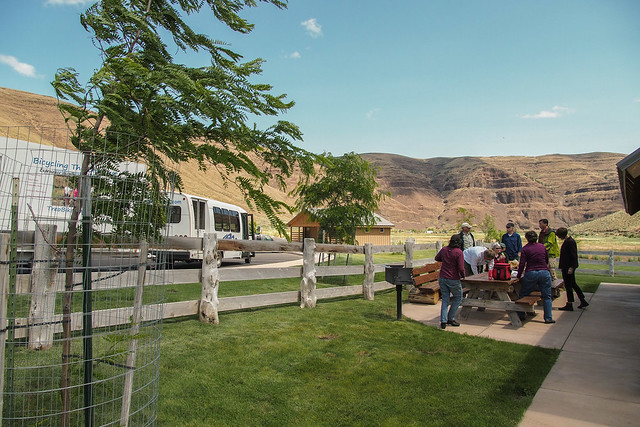 After a quick lunch at Cottonwood State Park in the John Day River canyon we shuttled to Condon, Oregon and began our day’s riding from there. The first day was a great appetizer of what was to come in the days ahead: quiet paved and gravel roads. We descended down to Rock Creek on HWY 206 and climbed an exquisite switch-back climb, then left the pavement and took gravel roads to the lodge. 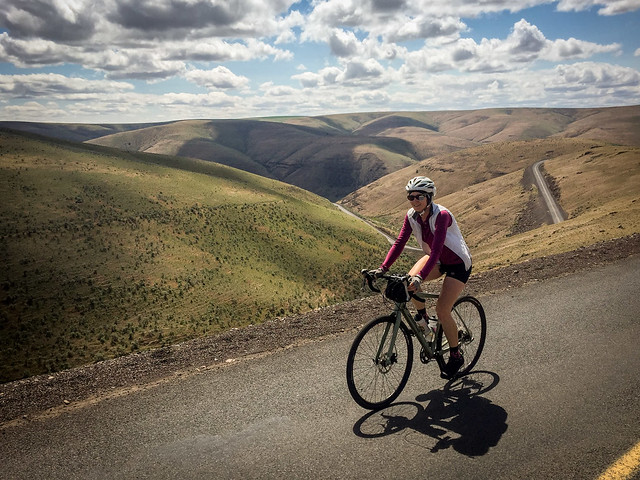 The good first climb to test the legs. 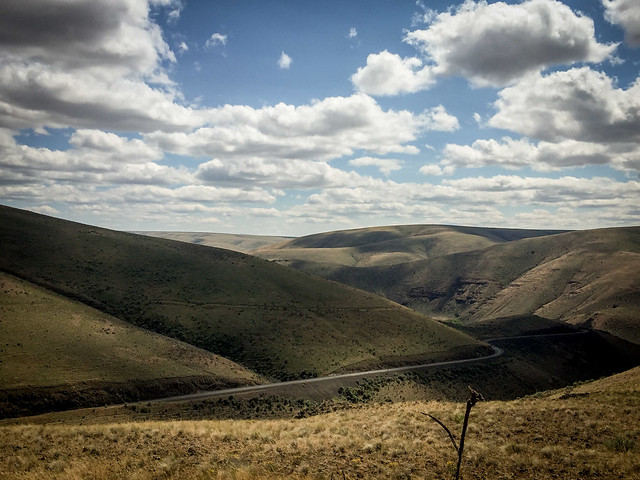 The views from the top of the ridge were pretty amazing. 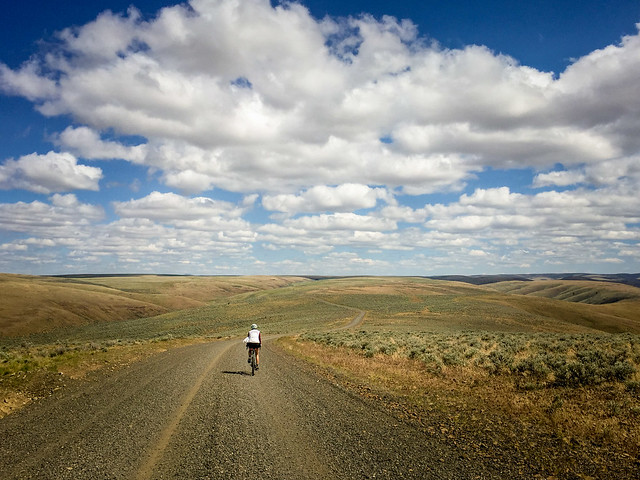 The first bit of gravel riding leads straight to the lodge

Revenge on Lone Rock and Impromptu Happy Hour
Last year, we had planned an ambitious ride to the Painted Hills all on gravel roads, but were thwarted by rain and derailleur-destroying mud. We made it a total of 16 miles that day. We ended the ride at Lone Rock that year to repair our bikes and lick our wounds. I had to hitch into town with a passing rancher because between the mud that had built up on my wheels and my mangled derailleur meant my bicycle wasn’t pushable, much less rideable. 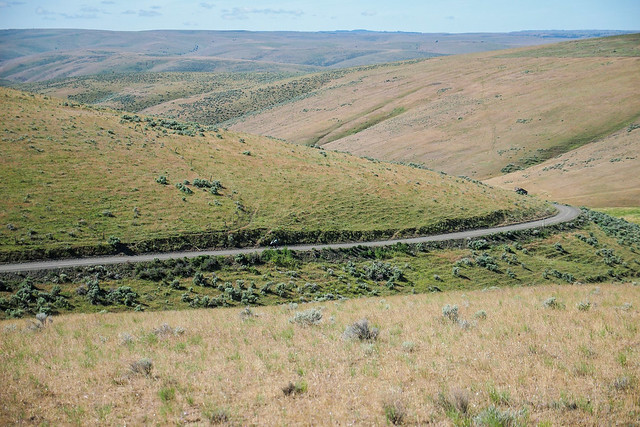 There weather was sunny and the roads were dry making for an auspicious start. 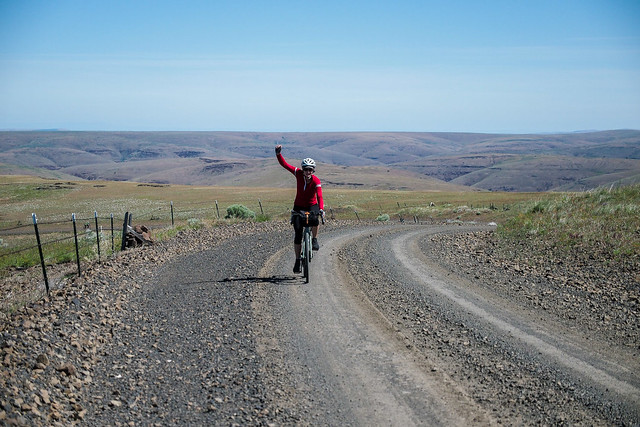 Celebrating getting to the top of the first long climb.

This year, the ride started more auspiciously. The sun was out and the clay dirt roads were firm and rideable. As we pedaled, I remembered exactly where my bike destroyed itself and where I fortunately hitched a ride. Laura and I both breathed a sigh of relief when we reached the first summit. From there, it was a gravel descent into the town of Lone Rock, so named for the large lone rock by the church. Thankfully, there was a little community center building with some shade and a spigot with potable water. 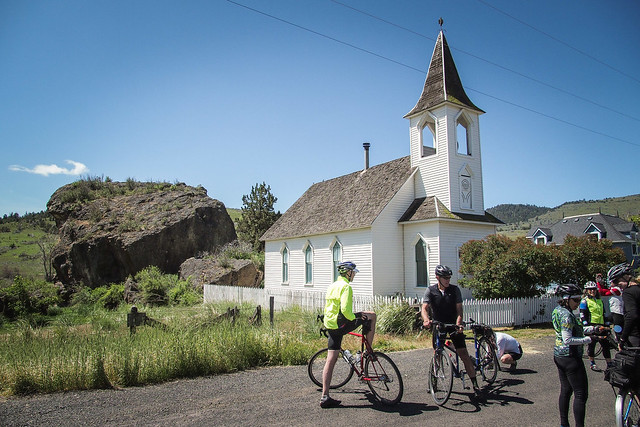 The rock that Lone Rock is named after. The only big jutting rock in the entire valley. How it got there is a bit of a mystery.

After relishing in having actually ridden into Lone Rock this year, we ate some granola bars and began to tackle the long climb OUT of Lone Rock. From the valley floor you can see the trace of the road rise relentlessly to some hidden summit. The road itself was nearly free from traffic and gave good views as you ascended out of the valley. It is one of those climbs that is longer than it looks. Just as you think you are going to summit, it breaks your heart and reveals another pair of switchbacks. We were glad when we finally reached the top and saw Phil’s shuttle which had our sandwiches and more water. 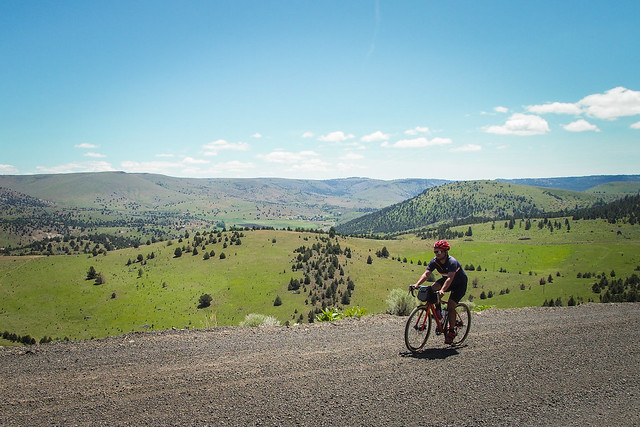 Climbing on the road out of Lone Rock and the valley below.

From there we rambled along a paved road along a ridge and turned off to a gravel road that headed towards another canyon. The road conditions were getting a little worse and with the heat of the day, most of the people in the group were ready for an early happy hour. We stopped at the entrance of a big ranch when we saw an ATV speeding towards us from the ranch house. Just as the ATV reached us so did Phil’s shuttle. It turns out they were cousins and he was adamant at having us over for a visit. The group unanimously accepted and we called the riding done for the day to enjoy some beer drinking and listening about the early homesteads in this nearly forgotten valley.

More Gravel
Our third and fourth day included more back roads riding. Perhaps one of my favorite rides from the lodge was a varied 42 mile loop. I rode it last year as a singlespeed since my derailleur broke and it was much more pleasant to revisit the ride with all the gears. After a gravel climb and a paved descent into a wooded valley with a creek, we turned on to Sunflower Flats road which (surprise!) began to climb again. This time we were climbing beneath the shade of some pine trees which was a welcome change from the exposed grasslands. 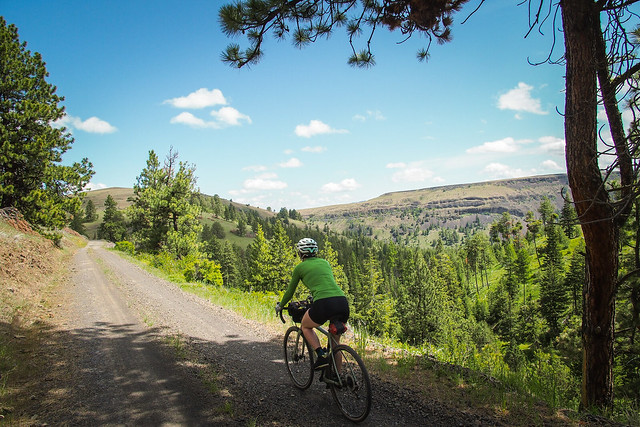 At a certain point near the summit, the trees distinctly gave way again to more open country and we found ourselves riding an undulating ridge line with spectacular views. Just when we thought the scenery couldn’t get any better, we descended on a rough gravel road through another canyon. This time of year, the hills were still green and it gave the impression of riding through some unreal painting. 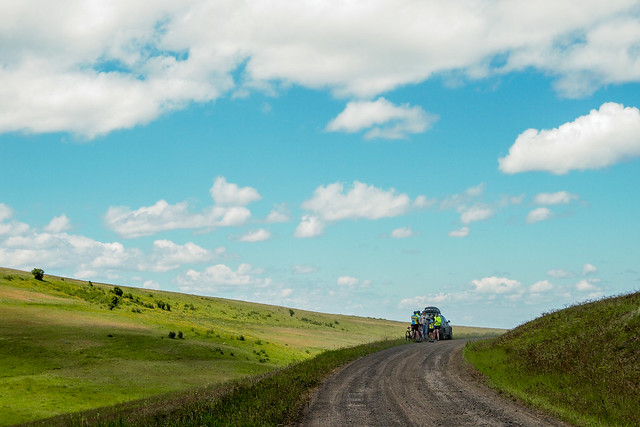 A welcome water stop in the middle of nowhere. 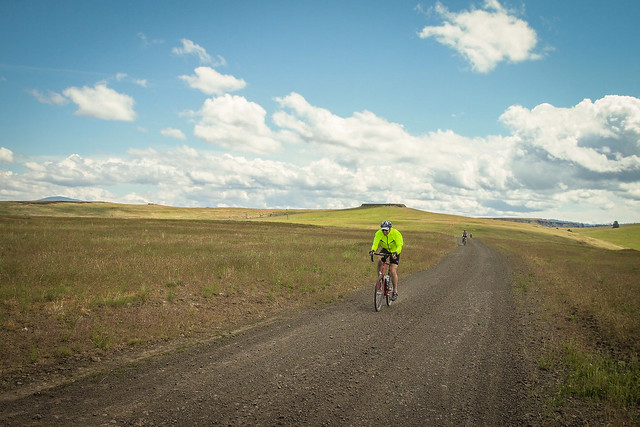 Cruising along an exposed ridgeline. 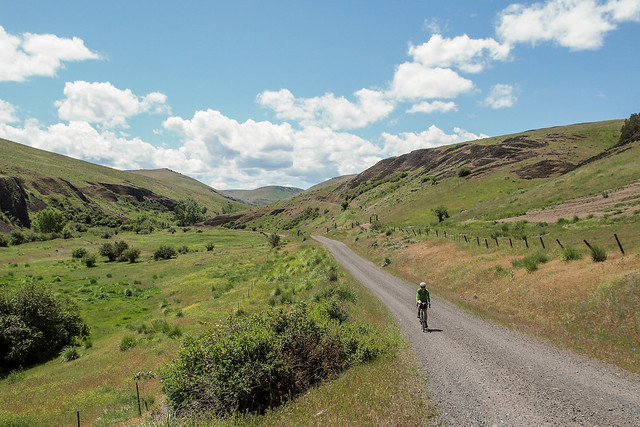 A rocky descent through a postcard perfect landscape.

Cowboy Steaks
In this country, the only thing bigger than the hills are the steaks. I would be completely remiss if I didn’t make some mention of the food. It is no lie when I say half the reason I look forward to going to Treo is the steak. We got a special treat when Brian, the son of our ride leader, brought a big slab of cow from EatOregonFirst, a small business that provides meat to some of the most well known restaurants in Portland. Brian and Phil cut up the meat into 12 “cowboy steaks” which contain the extra bits and trimmings that are usually removed when steaks are served at a restaurant. Brian then cooked them up sublimely on a flotilla of grills outside. Meals were family style and without pretension and it was a good way to share experiences from the day’s ride. 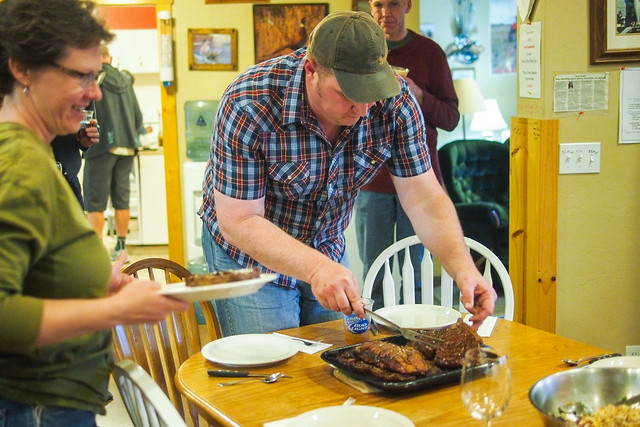 Brian serving up the steaks he just expertly grilled. 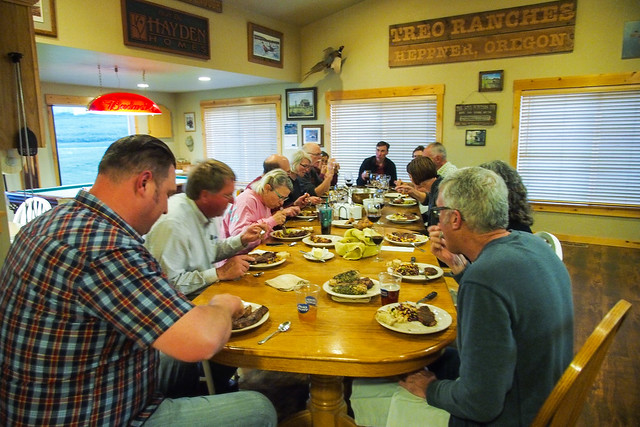 It got real quiet once the food was served 🙂

The Canyon of Sorrows
The final day’s ride was fairly tame compared to the previous rides. Although it did start with a somewhat technical downhill on double track where the terrain verged on XC mountain bike territory. The trick was to just go slow and pick your way through the ruts and rocks. After that, we ended up on Dale Brown Road, which was flat and fast and the tandems took off in the distance. We regrouped at Barlow Canyon Road and pedaled slowly by the remains of old homesteads. It was like riding through a museum exhibit as we passed the buildings of many people that had tried to make a life out in this rough country. 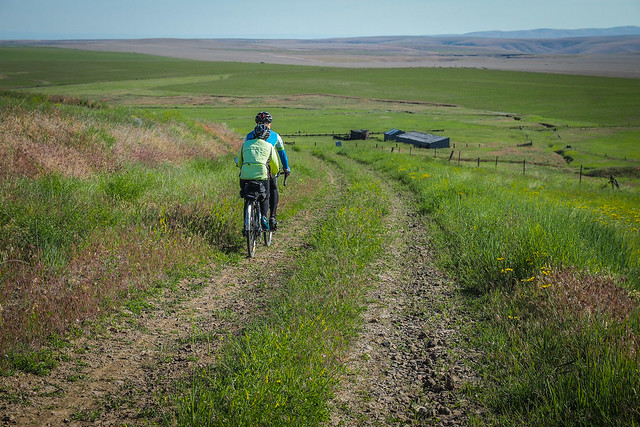 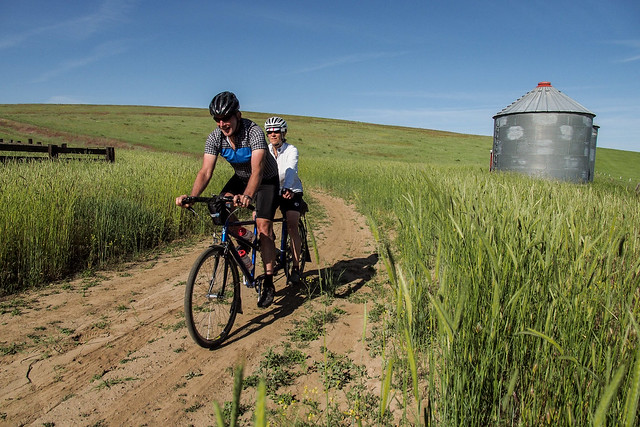 Dan our ride leader and his wife Janet descending on a tandem.

At the end of the Canyon of Sorrows section, we packed all the gear in the trailer and Phil drove us back to Portland. Instead of having to drive through the Memorial Day traffic, we were able to snack, have one last celebratory beer, and take a nap. This year’s riding out in Treo was far more successful than last year. There was no peanut-butter mud and no serious mechanicals. Although we didn’t quite make it all the way to the Painted Hills this year, there are already plans to tackle it again next year as a two day gravel road ride. The terrain by Treo is simply challenging. The climbing, varying road conditions and heat can make any ride a slog unless you are in peak form. That is one of the reasons Phil’s services are so awesome, because you can explore areas by bike and actually enjoy them without having that constant dread of managing water and food. We know from doing a lot of self-supported touring that some of the most inhospitable terrain is also the most beautiful and often that beauty was lost on us because we were trying to boogie to our next resupply point. Riding this part of Oregon with Phil, for us, has allowed us to truly enjoy the riding and the scenery without the constant worry of our water bottles going dry.

Check out the rest of the photos in this Flickr album.