Way back in Spring 2011, we had a grand plan.. As part of our Small Wheels Big Adventure trip, we would steer our new Bromptons to Glacier National Park and ride up Going-to-the-Sun Road. And then I fell down the stairs and sprained my ankle and we had to delay the whole trip and we knew that we wouldn’t make it to Montana before the road opened to cars. And thus was born an unrequited desire of a trip.

Fast forward to this winter, when we began blogging for Amtrak.. We were asked, if we could go anywhere with our bikes on Amtrak’s network, what would be at the top of our list? Hands down, without having to think about it, we knew we would take the Empire Builder to Whitefish, and finally ride Going-to-the-Sun Road.

Going-to-the-Sun Road is an engineering marvel surrounded by an epically beautiful landscape. Seriously, this is not an exaggeration. The road and the mountains that it climbs through are surreal and breath-taking and surpassed every one of our long-held hopes and expectations.

Each winter, the National Park Service closes Going-to-the-Sun Road beyond Lake McDonald, and everything is covered by a deep snowpack. In the spring, road crews begin to plow the road and prepare for summer visitors – which means that, while they’re working, the road is open only to people on foot or bike.

I imagine that Going-to-the-Sun Road is still stunning no matter how you arrive, but being there while it’s car-free is an experience that’s hard to top.

As if it weren’t incredible enough to experience Going-to-the-Sun Road while it was car-free, we were able to enjoy our entire weekend without ever driving. Glacier may be huge, but it’s also surprisingly accessible by bike and transit. 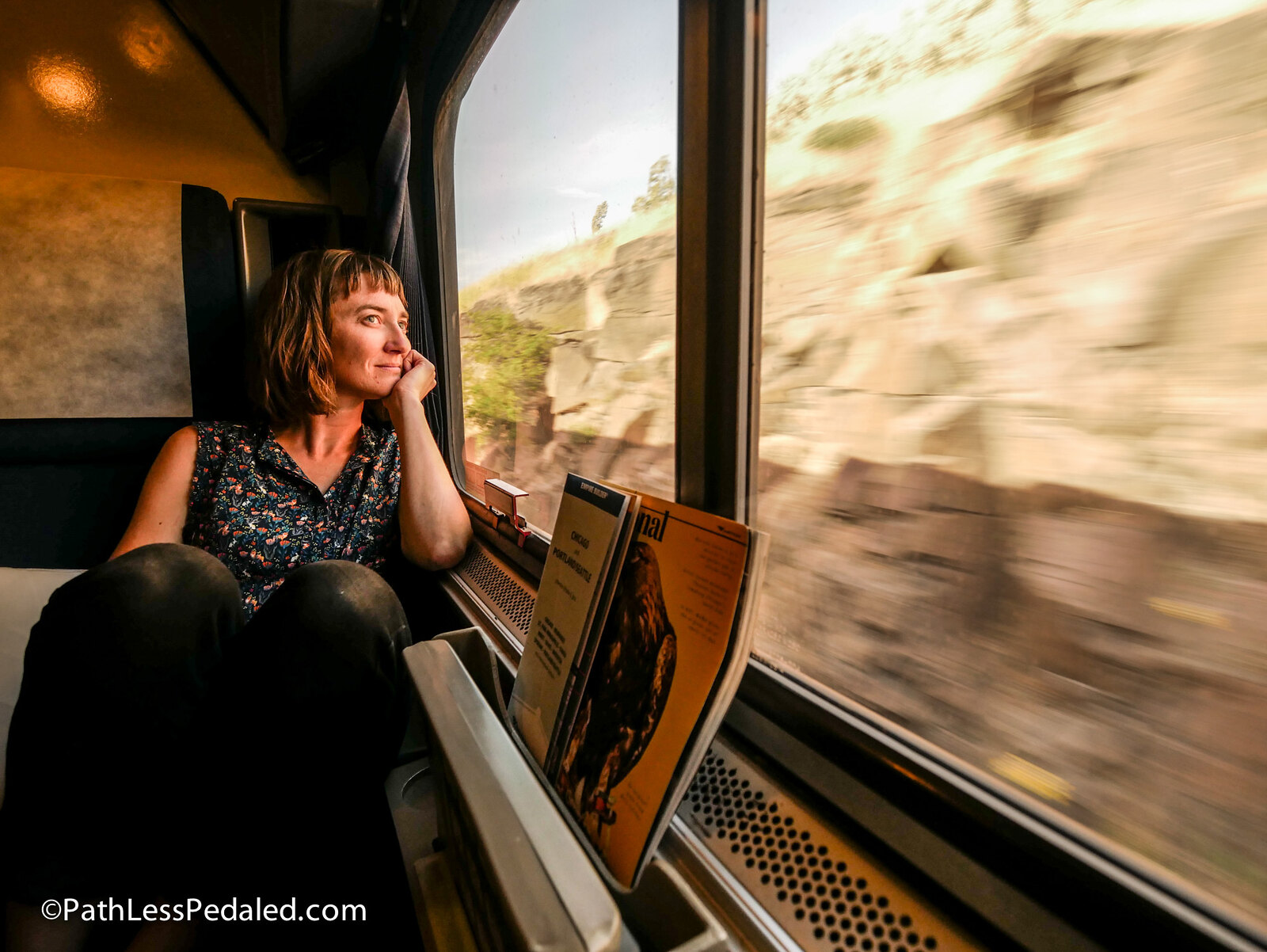 We boarded the Empire Builder in Portland for the 13-hour journey to Whitefish. We are so accustomed to taking the Coast Starlight to California, which takes upwards of 24-28 hours, depending on where we get off – so the trip to Whitefish felt incredibly quick. The speed of the trip, however, in no way diminished the scenery, because the Empire Builder leaves Portland via the Columbia River Gorge. We watched the sun set behind Mt Hood and the rolling wheat fields of Central Washington, and then woke up to thick Montana forest before pulling into Whitefish just after sunrise.

For the rest of our travel day, and the day after, we explored around the Whitefish Bike Retreat, which nestles up against The Whitefish Trail and an endless network of forest roads. With the help of the Whitefish Bike Retreat staff, we pieced together a loop on gravel roads, overgrown double-track, and even some single-track. We carried a canister of rented bear spray the whole distance, but we saw nothing more than a few other cyclists and many many mosquitos. 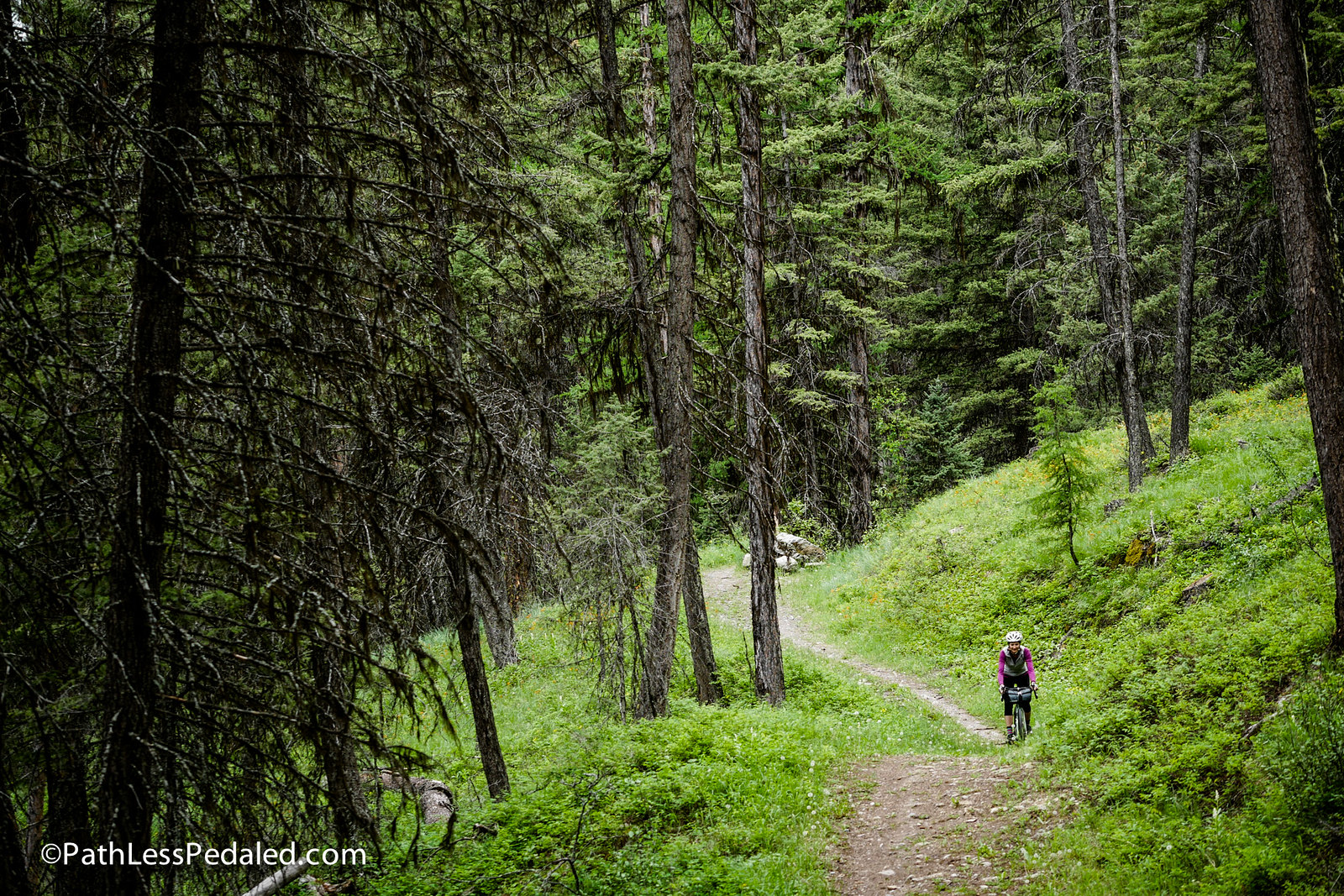 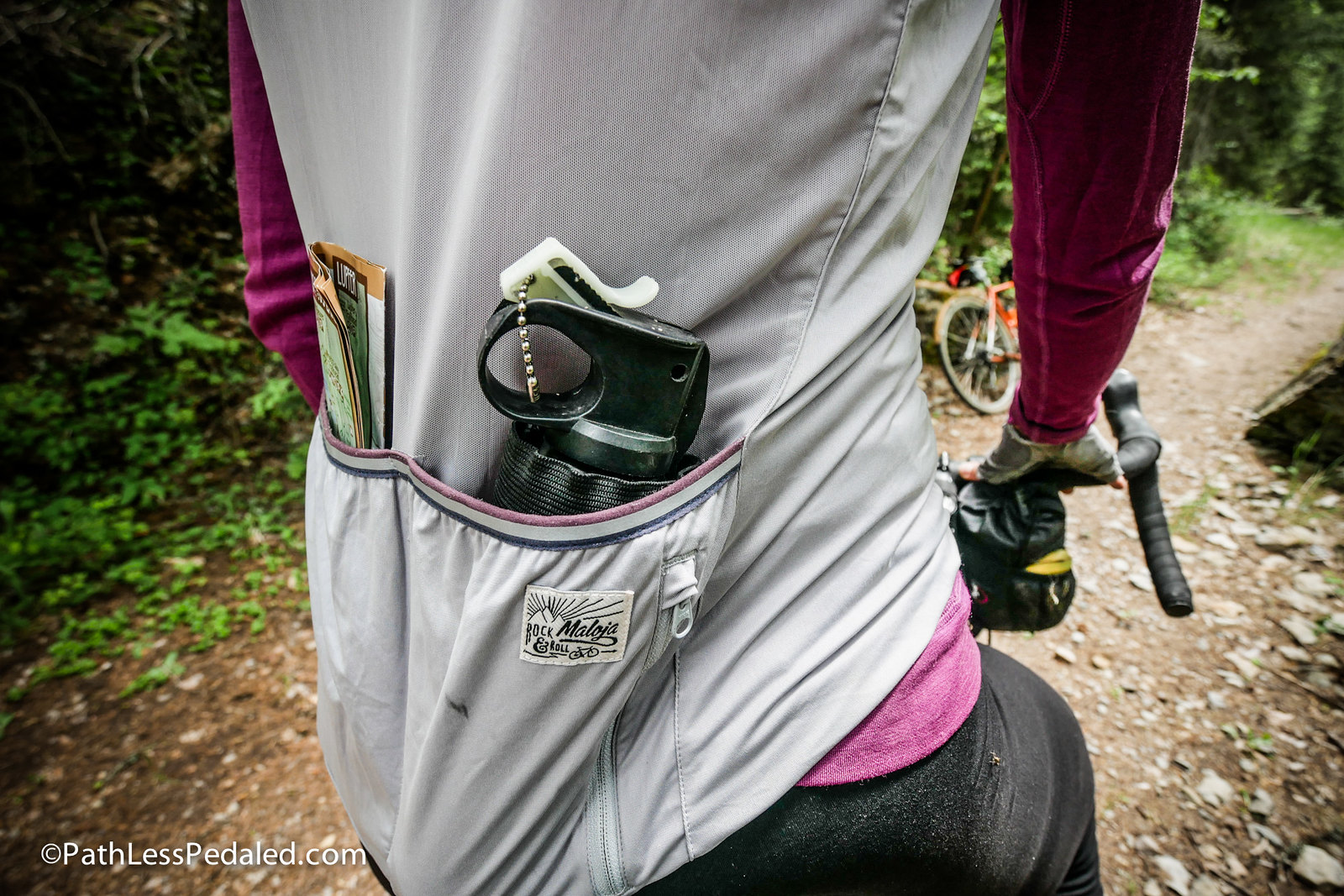 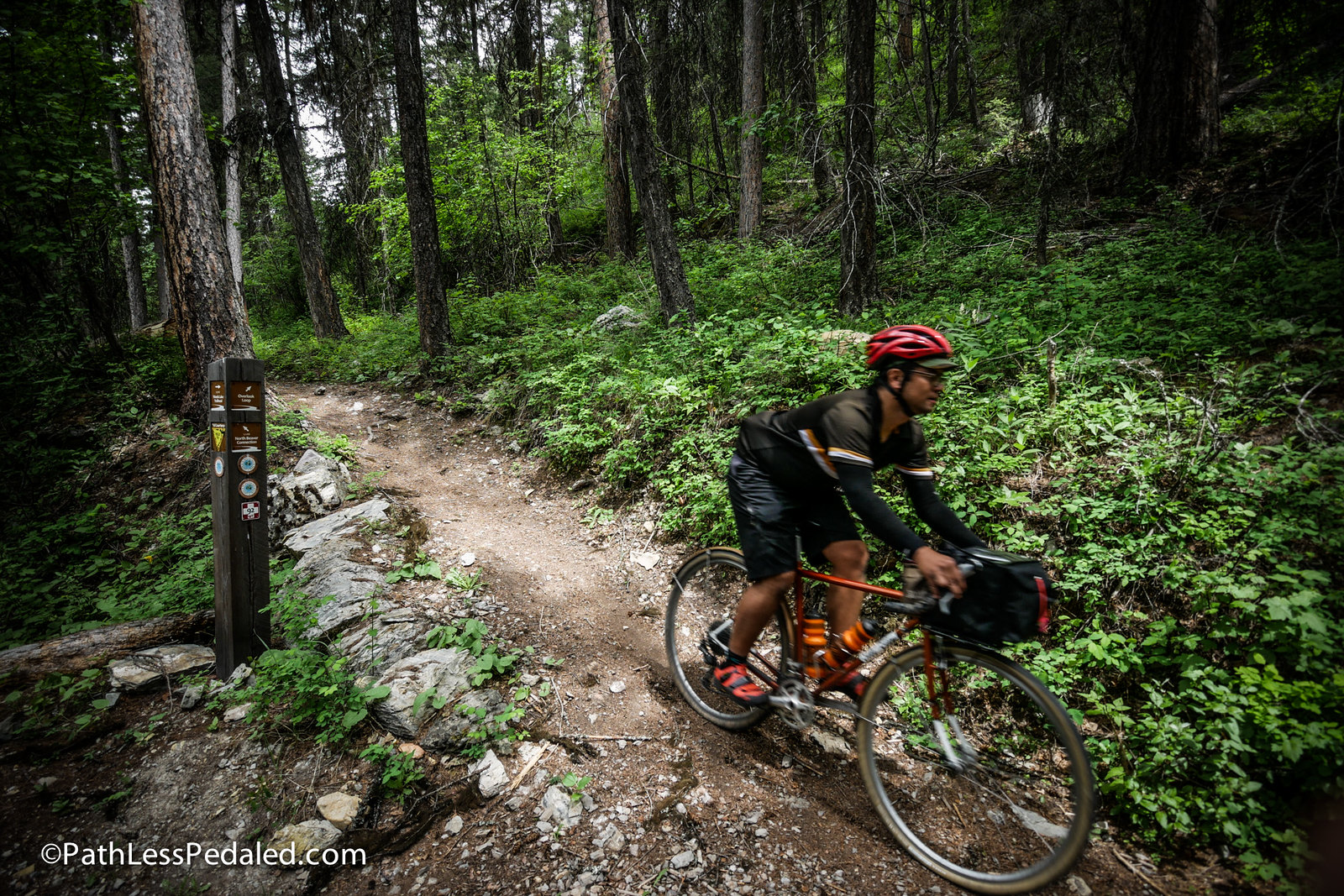 On Saturday morning, our appointed Going-to-the-Sun Road day, we were up early. We talked Cricket into riding with us, so we all drove out in the Whitefish Bike Retreat shuttle. We pedaled out from the Avalanche Creek area (the closest parking lot to the road-closed gate), already surrounded by swarms of other cyclists.

For the first few miles, we pedaled alongside McDonald Creek, under a canopy of trees. Eventually, we left the trees behind and got our first glimpse of where we were headed. Way up on the mountainside ahead of us, we could see a tiny grey line that marked the roadway, and we could hardly believe that there was space for a road to exist way up there.

As we climbed, we passed through an incredible tunnel with huge windows that open to the jaw-dropping scenery, and around The Loop with its nearly 360-degree view of the valley. We passed the Weeping Wall, where water poured down the cliff face and across the road. We saw dozens of waterfalls and, amazingly, the views kept getting better and better the further we climbed. 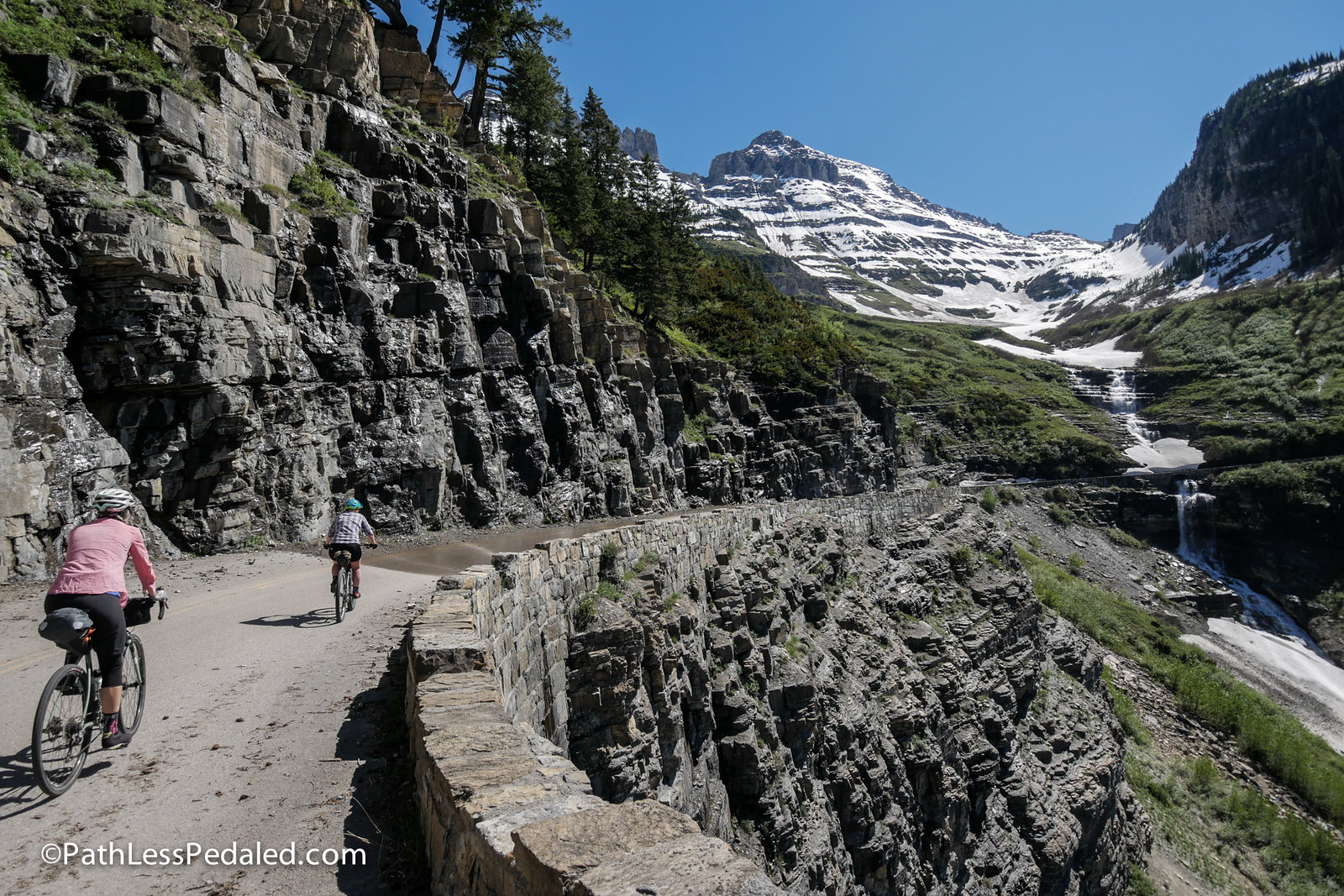 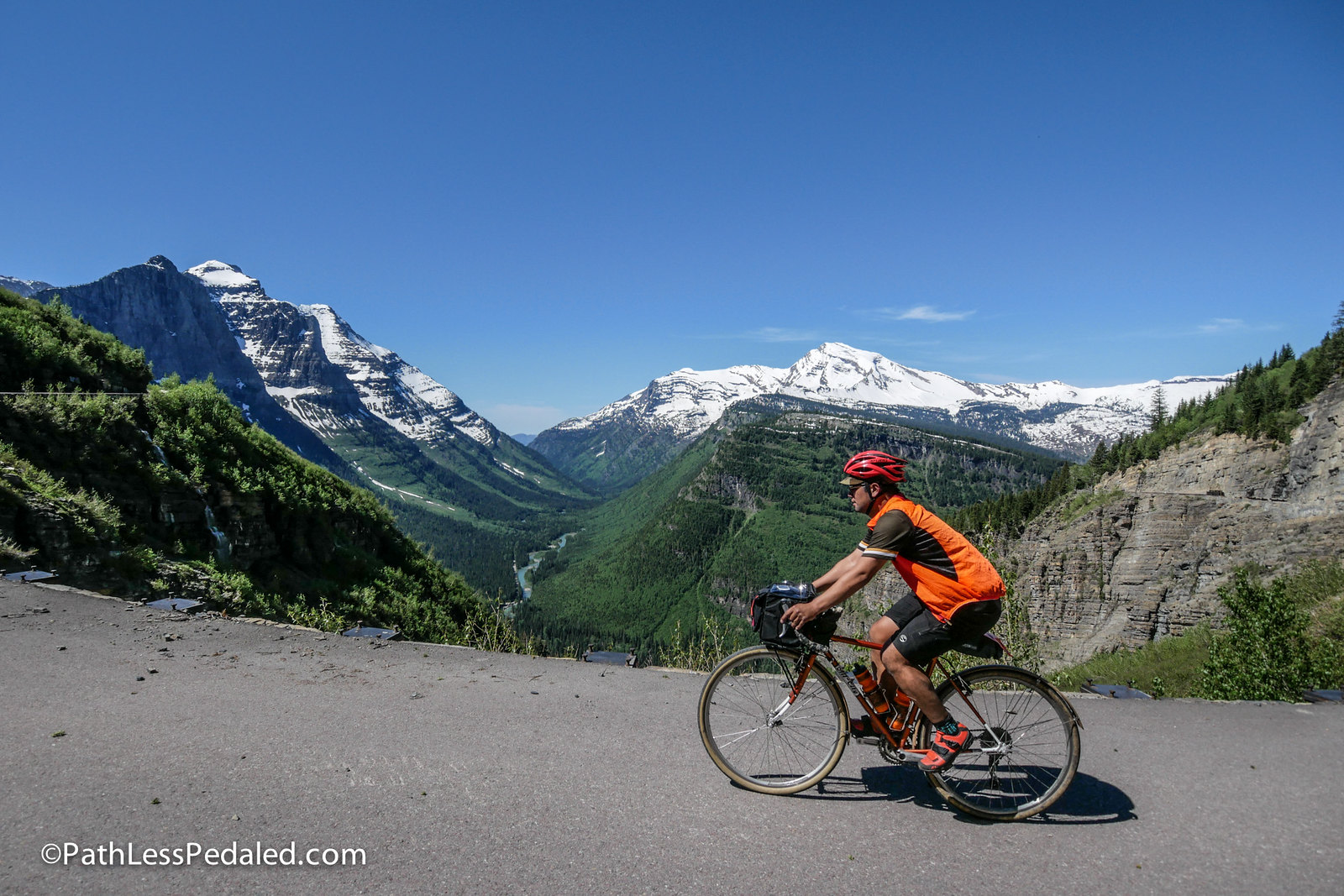 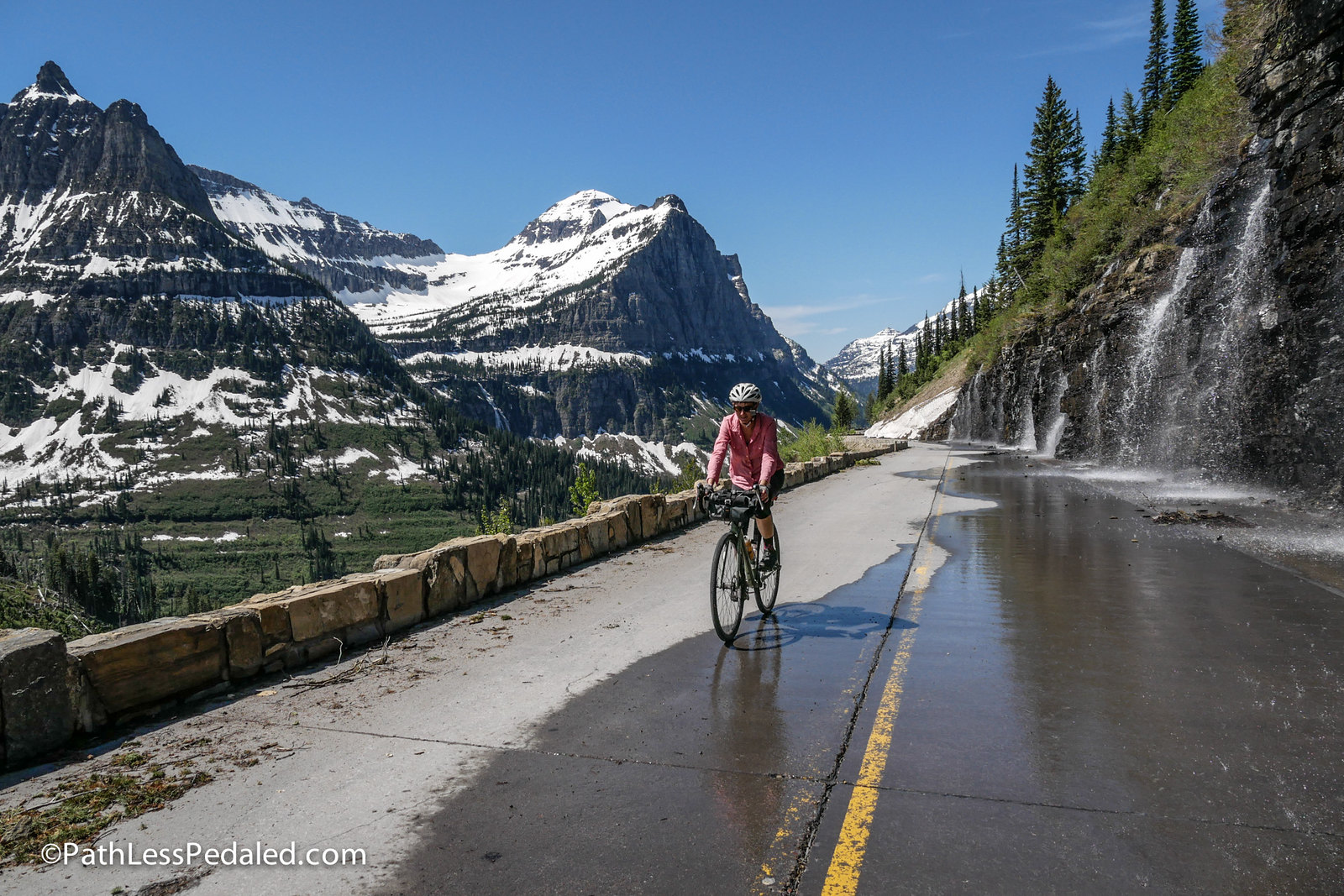 Finally, just a mile from the summit, we hit a patch of ice that marked the point where the plows stopped for the week. We were so close to the top that we considered just walking the rest of the way. But it turns out that bike shoes aren’t so great for skating across ice, especially when the guard rails haven’t yet been replaced. So we leaned our bikes against the snow walls and looked out over the valley, soaking in the magnificent views and the sense of accomplishment and the immense car-free quiet.

A Few Things We Learned Along the Way

Without a doubt, this was an amazing trip, and we would not change a single thing about it. But, along the way, we did learn a lot of interesting tidbits that are hard to find online, making it clear that there are dozens of other ways to piece together a bike-and-train trip to Going-to-the-Sun Road.

Due to the way the Empire Builder train splits in Spokane (with one half of the train going to Portland, and the other to Seattle), we were still required to box our bicycles. Boxing a bike for Amtrak is WAY easier than for flying, but it does require some extra time and consideration. If you want to skip the box, then we would suggest routing out of Seattle, which has the new Trainside Checked Bike service. (Read up on all of Amtrak’s bike policies.)

If you want to skip checking your bike altogether, consider carrying on a folding bike (like a Brompton) or renting a bike when you arrive. Either option would allow you to get off the train at the West Glacier stop, a short jaunt from the park entrance.

Going-to-the-Sun Road is open to non-motorized traffic all year, with some restrictions. What makes it so great on a spring weekend is that you will be riding on cleared pavement, with no cars, when the crews are not actively plowing. You are welcome to ride during the week while the crews are working, but be aware that you will only be allowed to ride to a certain point, since the road is way too narrow for both cyclists and active plowing. Also, if you ride during the weekend, you can make use of the free shuttle (and bike trailer) between the Apgar Visitor Center and the gate at Avalanche Creek.

Check the Glacier National Park website for information about bicycling in the park, as well as updates on the current status of Going-to-the-Sun Road.

Thank you to Amtrak for helping us make this bucket list trip a reality!