It’s two days before the New Belgium Ramble Ride. We’ve just wrapped up our trip to Glacier; and we’re home for exactly long enough to unpack, wash everything, and pack it all up again. I check the weather forecast and laugh. If Weather Underground is to be believed, it will be 90 when we arrive in Prineville, and then barely 60 the next day, with threats of rain and other crazy weather. But who really trusts a weather forecast, especially when it says rain and you’re headed to the dry part of the state?!

What sold us on the Ramble Ride was a combination of two things.. 1) The event is structured in a way that riders carry their own sleeping gear, but you can throw a small duffle of clothes in a support van, and all food is catered. Which means that you can try bikepacking without having to haul every last thing you need. 2) We were invited as media, complete with the opportunity to test gear from the event sponsors (namely Blackburn and Big Agnes). Which meant that we would be provided with all the bags and gear we would need for the weekend, and we could just show up with our bikes and some clothes. (And leave behind our beloved-but-bulky sleeping bags that have been instrumental in keeping us loyal to pannier-packing.) 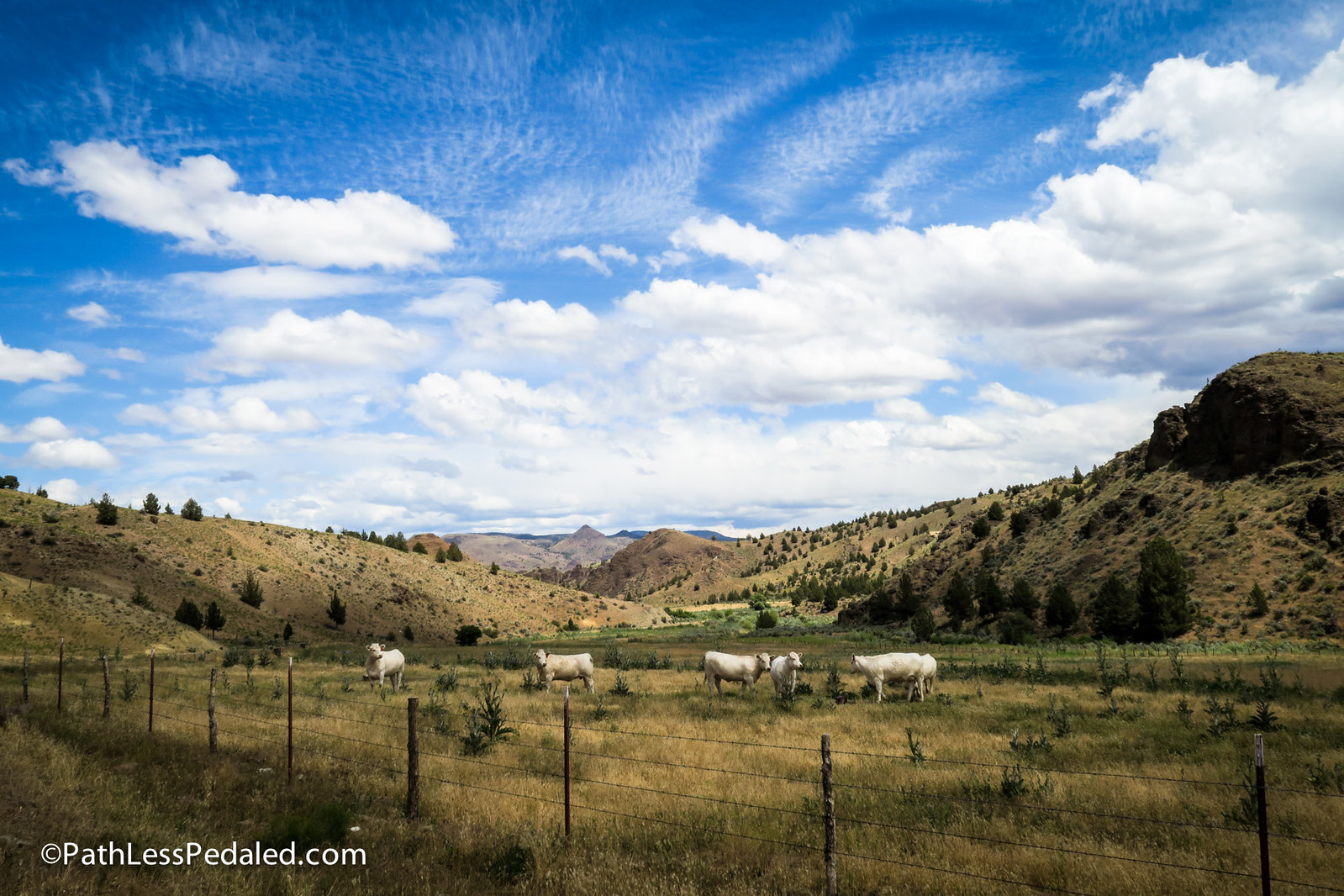 The first morning of the Ramble Ride found a group of roughly 40 people converge on Good Bike Co in Prineville. There was coffee and breakfast burritos and much ogling of each others’ gear. And after a rousing welcome and some group photos, we all shot off, excited and full of energy, with no expectations of the weekend ahead. As we rode and chatted, the pavement eventually turned to gravel. And as we rolled into camp and began to pitch our tents, the sky broke open and gave us the first taste of what Mother Nature can dish out in the mountains in late spring.

Rain. Hail. More rain. The temperature dropped. The sun came out for brief teasing moments. Then more rain, heavy rain, instantly-puddling-everywhere sort of rain. There was nothing to do but laugh, huddle under the pop-up canopies, and crack another beer. 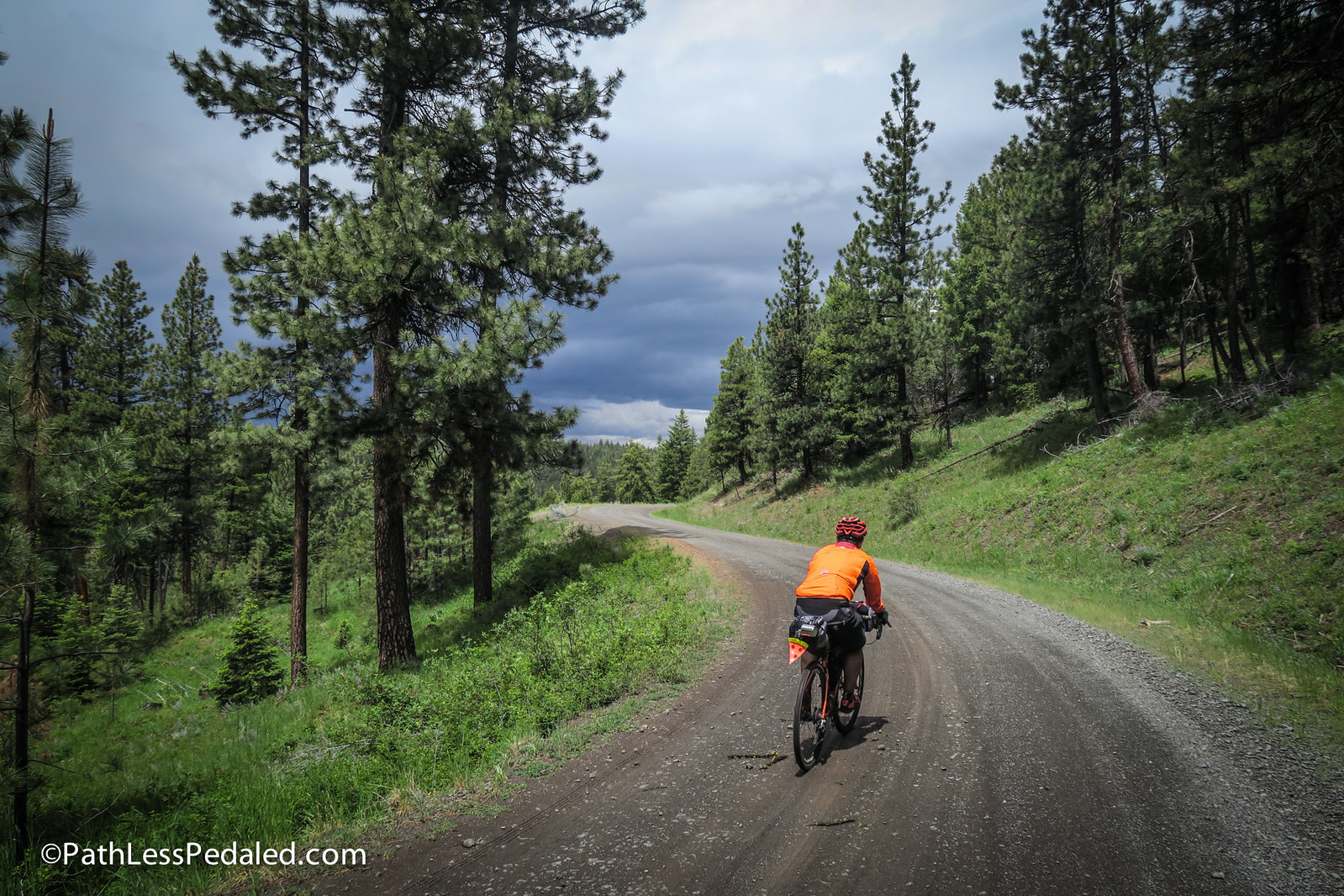 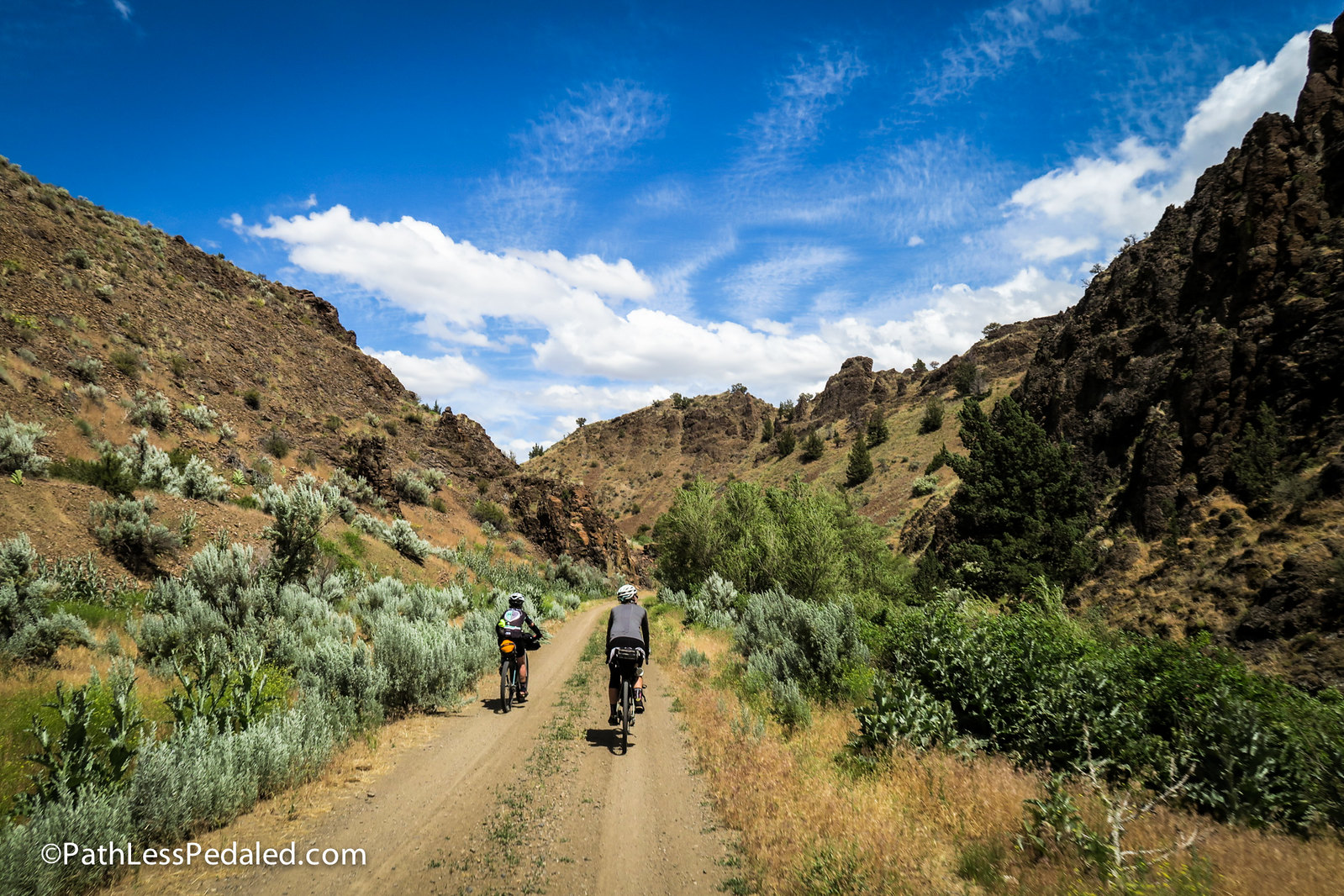 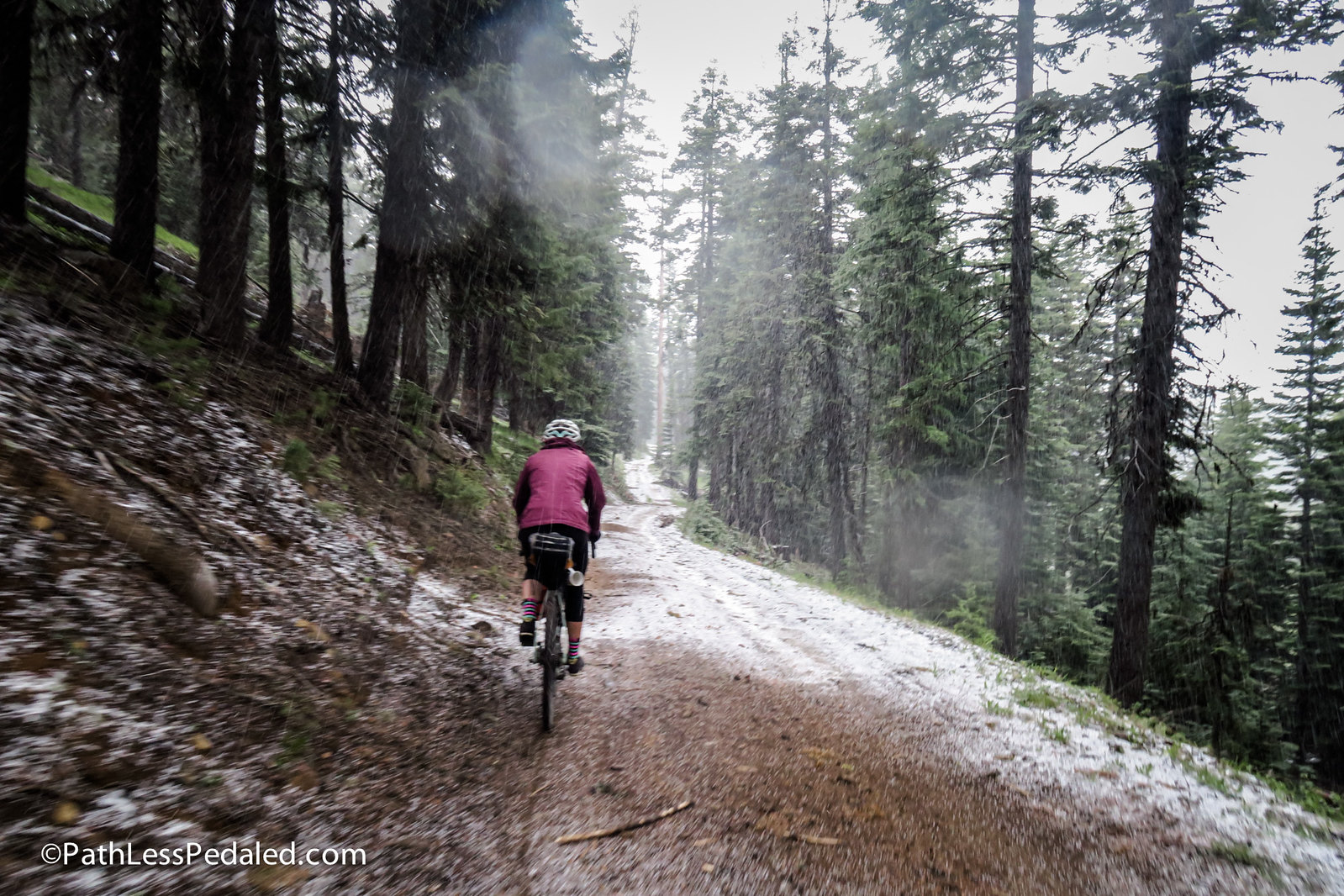 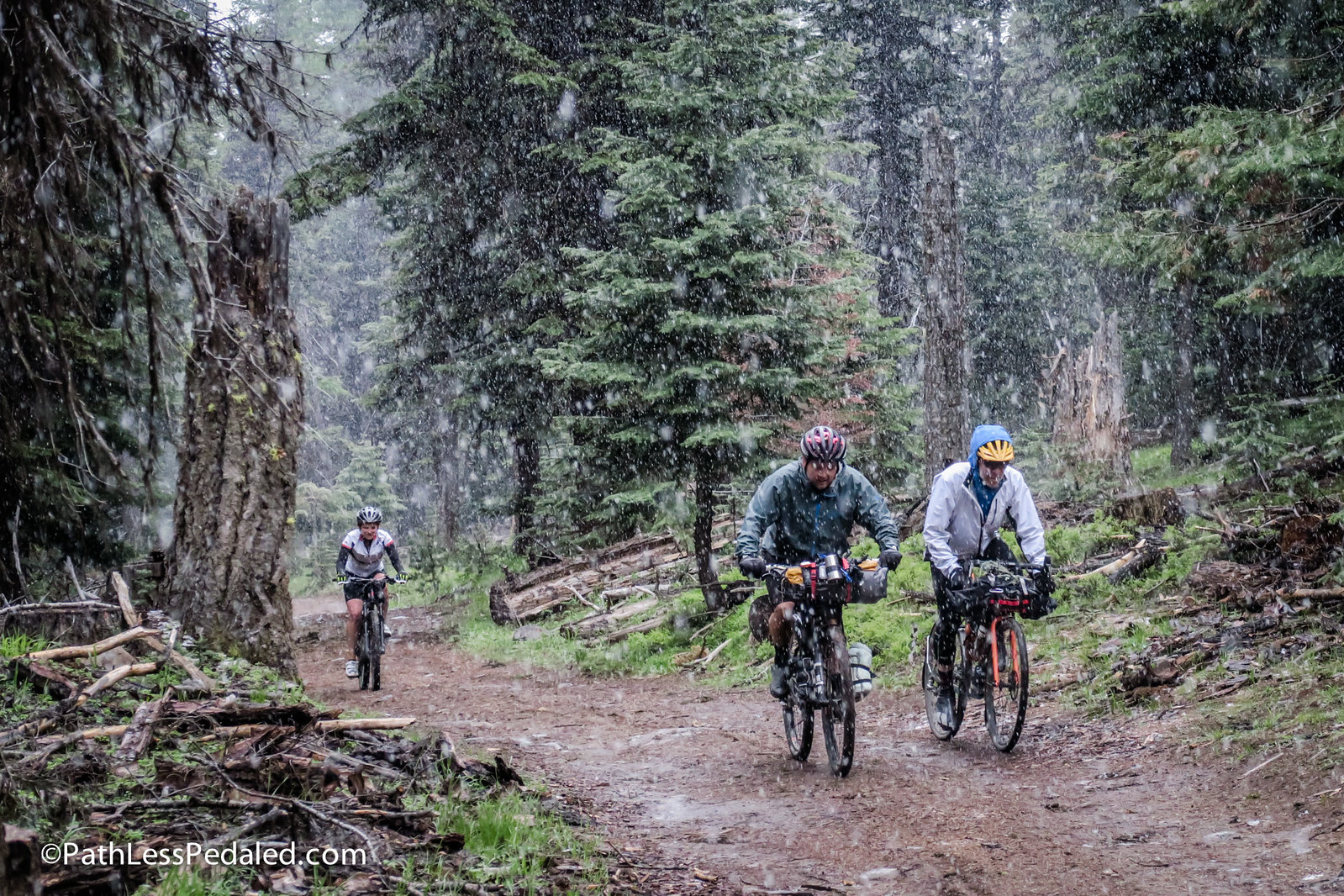 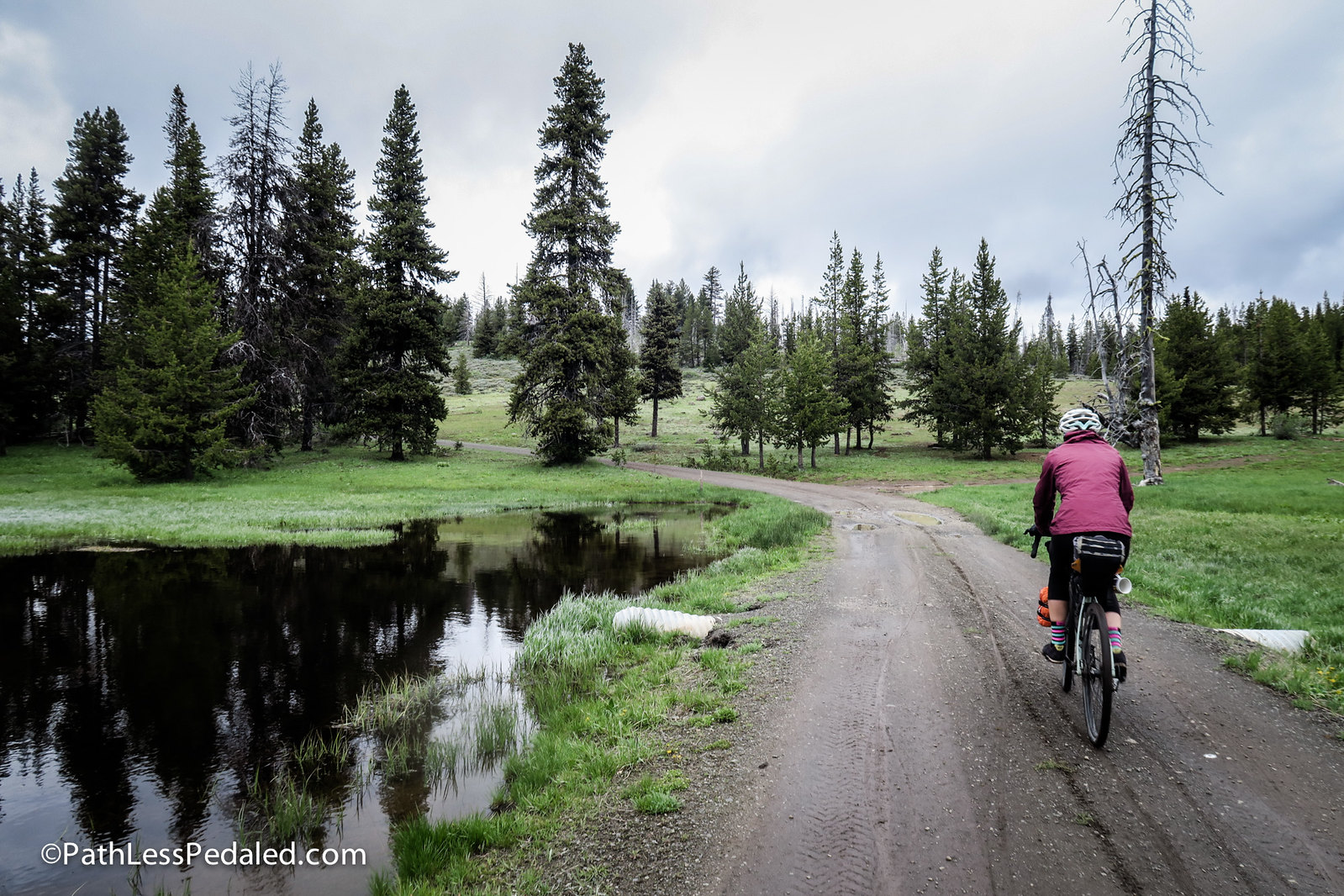 Over the next two days, we pushed ourselves harder than we have in a long while. Long miles, relentless climbs, scorching heat, heavy rain, hail, snow.. SNOW. Some hike-a-bike, some mud, some confusion when a downed tree left the course unmarked. And entirely too many miles spent spinning in the granny gear, because we literally ran out of gears.

We rolled into Mitchell, at the end of Day 2, dazed, whipped, looking like deer-caught-in-the-headlights.

We ate everything in sight. Then we ate some more.

And, somewhere between the crazy weather and our screaming legs, we were literally stopped in our tracks by the breathtaking scenery.

When you finally crest a never-ending climb and the horizon opens up and you can see layer-upon-layer of brightly-colored hills.. you forget (at least momentarily) how exhausted you feel, and you remember that *this* is why you pile stuff on your bike and haul it down a gravel road in the middle of nowhere. 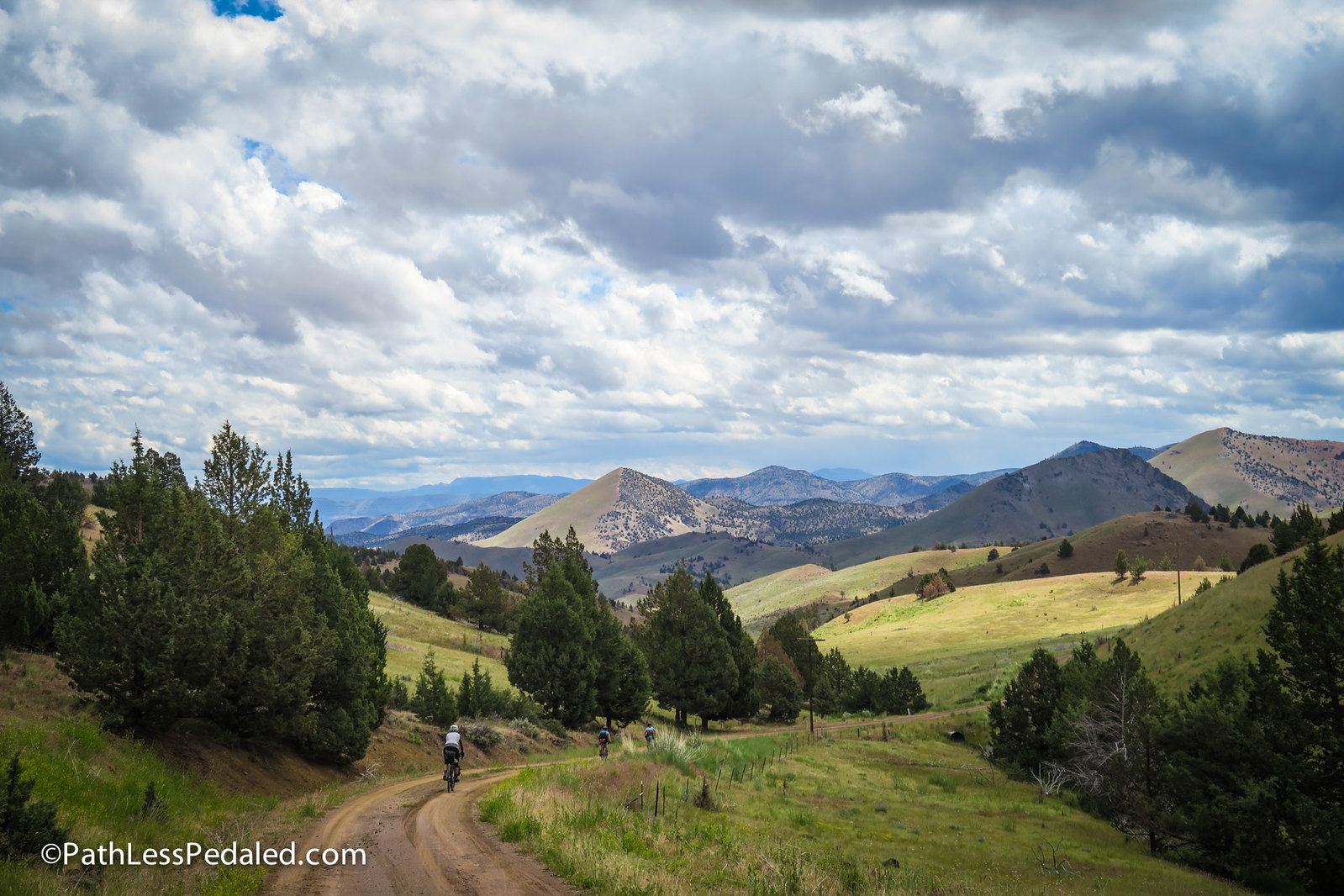 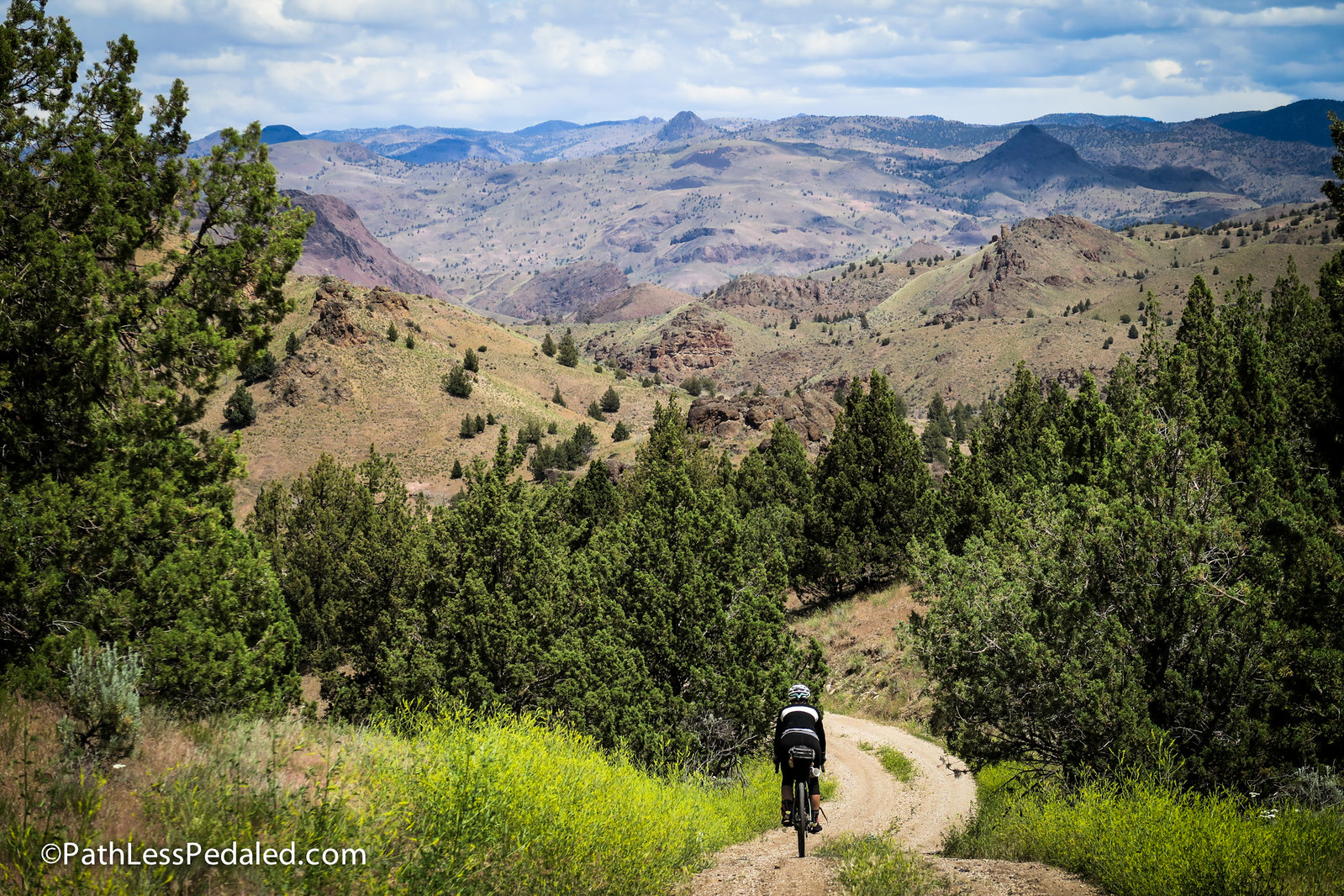 Make no mistake, the Ramble Ride was hard. This was no beginner route, and the details were still a bit rough. I remember bonking somewhere on Day 3, and thinking that I had bypassed Type 2 fun and moved on to something like ‘if I make it out of this, I won’t look back and laugh, I will simply block it out.’

I think that was right before it started to snow. At least I can look back and laugh at the snow.

Which is to say.. now that we know what to expect, we would totally do the Ramble Ride again. Just with a lot more hilly miles in our legs. And lower gears. And a few extra burritos in our seat bags.

Many thanks to Peter for bringing this crazy-awesome ride to Oregon. And to Blackburn, Big Agnes, Good Bike Co, and Spoke’n Hostel.