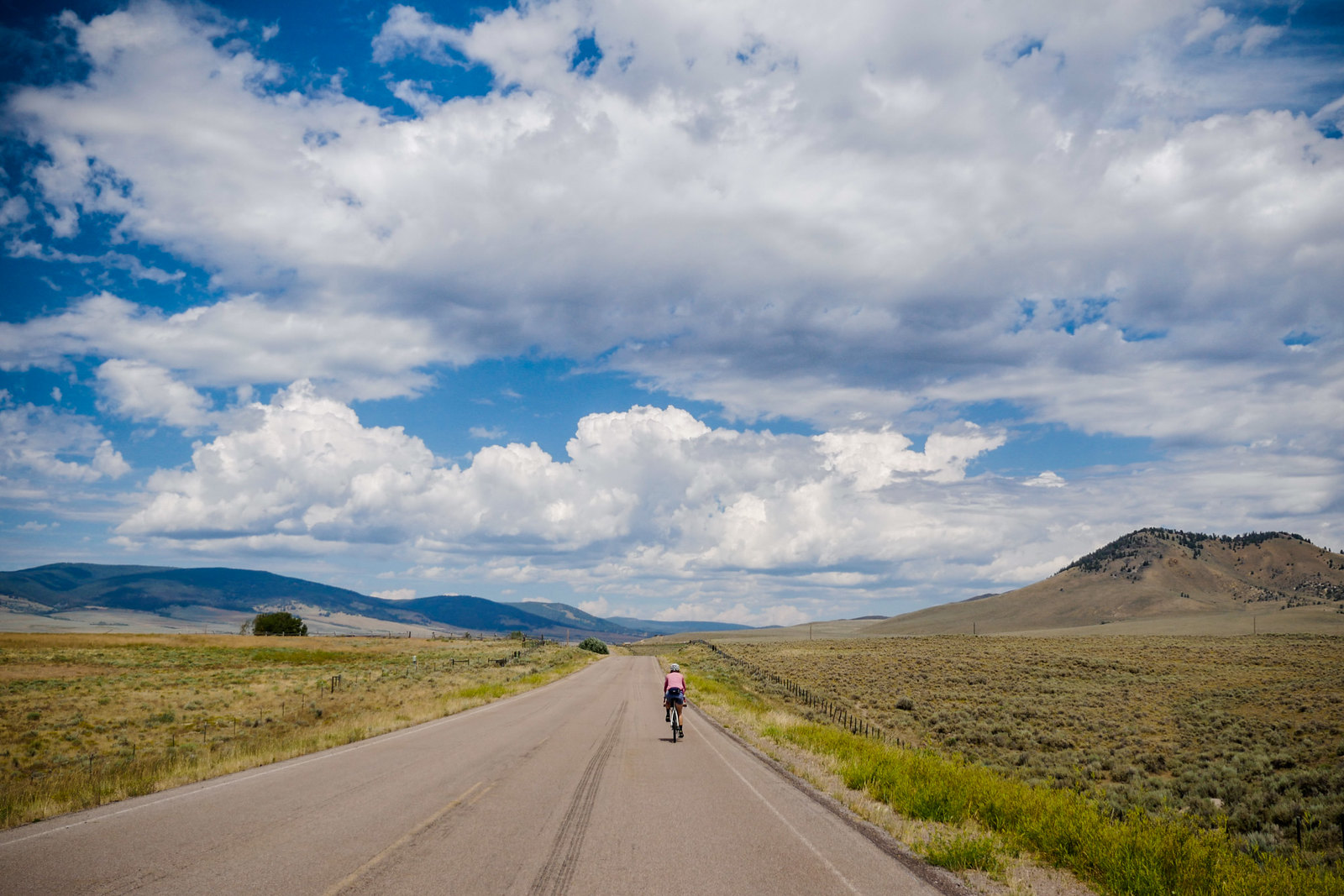 It’s Sunday afternoon and we’re in Dillon, Montana, for a week of cycling and fly-fishing. We have been looking forward to this trip for months, and now we are here, adventure minivan stuffed with four bikes and every permutation of bike bag, alongside fishing gear and seemingly everything else.

We kick off our visit with lunch at the famous taco bus and a stop in one of the local fly shops, followed by a steak dinner, then dodging mosquitos while hunting for trout as the sun sets over the Beaverhead River. Not bad, Dillon, not bad.

Day 1. The TransAm, from Dillon to Nevada City/Virginia City. 55 miles.

Six years ago, we pedaled our loaded Bromptons through Dillon, along the TransAm. We met incredible people and dodged thunderstorms – and we are excited to revisit this iconic stretch of road, including one of the places that has most impacted our lives – the Bill White Bike Camp in Twin Bridges.

Because the weather forecast shows temps in the upper 90s, we are up and on the road with the sunrise. It is deliciously and deceptively cool. Dew from the night before is lifting off the fields in dreamy fog-like clouds. The cows come over to say Hi, probably hopeful that we’re bringing them some breakfast. It is a beautiful start to the week.

It’s still early in the day when we roll into Twin Bridges, so there is still a bike tourist at Bike Camp. He’s riding the TransAm from the East to West, and he tells us about the incredible riding through the Tetons. For a few moments, we are once again a part of the nomadic community that passes through the region every summer. We wish him well as he pedals off, and we turn our sights to the Beaverhead River that runs through town. 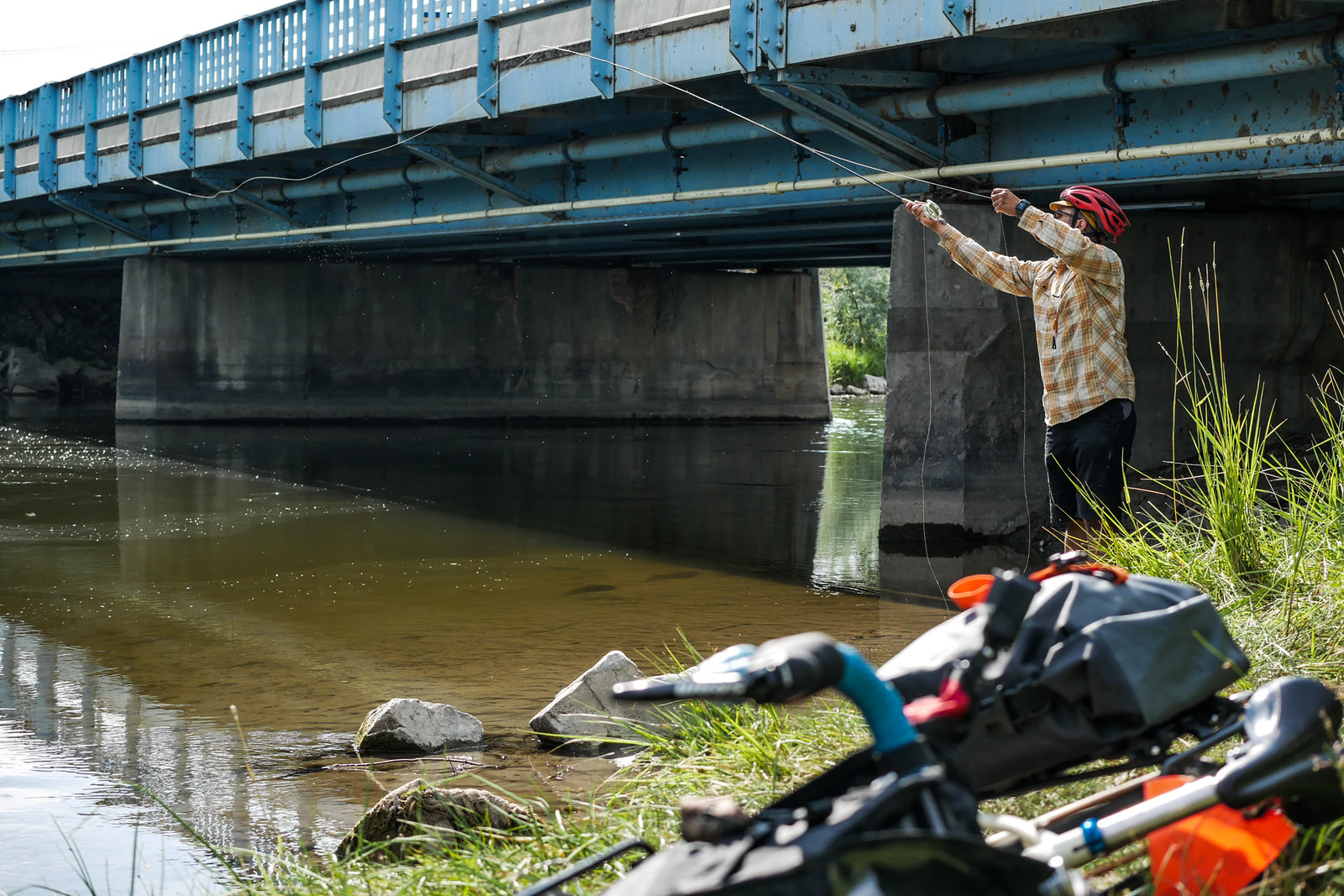 We pedal on to Sheridan, where we eat our picnic lunch in the shade of the dugout at the local baseball field. In Alder, a guy in a pick-up tells us that he’s ridden between Yellowstone and Missoula several times, a welcome reminder that we’re not such an oddity as we might feel. We take a fishing break alongside the Ruby River, trying (unsuccessfully) to drift just the right fly in just the right way to the three large trout we can spot from the bridge.

And then we are on to Nevada City, where we meet Becky from the Montana Heritage Commission for a tour. Six years ago, we peeped through the fence at Nevada City and then continued on, completely unawares of all the awesome that extends way way beyond the other side. There are dozens of complete buildings from the 1800s, laid out the way the original town would have been platted, each building full of history and artifacts from the gold rush days.

For us, the TransAm is an incredible route because it passes through these small places, and gives us all an opportunity to connect with people from other walks of life and a history different from our own. But it’s also important that we point out that much of this route is on a two-lane highway, with little to no shoulder space. The traffic is light, and the vast majority of motorists passed safely without incident – but, if that’s not comfortable for you, consider a re-route on one of the nearby gravel options (many of which will still bring you into these communities).

Every year, a group of hearty riders descend on Dillon to ride the 130-mile RATPOD event, ringing the Pioneer Mountains in a long and challenging route. For our second and third days in the area, we are following a modified portion of the route, spreading it out into a two-day tour so we can explore and fish.

Once we’re on the other side of the pass out of Dillon (to the West), we take the detour South to Bannack State Park. Bannack was the territorial capital of Montana following the discovery of gold in the area in the 1860s. This is another historical spot that we skipped when we first passed through six years ago. Silly us. It’s totally worth the detour! Because Bannack is a State Park, it’s completely preserved and interactive. You can walk the Boardwalk through town, still laid out exactly as it was, and you can even go inside the buildings and imagine what life was like back then.

From Bannack, we return to the main highway, then turn off onto the Pioneer Mountains Scenic Byway. The road winds its way back into the heart of the Pioneer Mountains and a near-endless collection of forest and quiet places. We stop to eat at the Grasshopper Inn, one of the few businesses along the Byway, and we meet a Divide rider (the first of many we will see over the next few days).

After fueling up, we make the last push up the hill to Elkhorn Hot Springs, a rustic resort that was built in the 1920s. The storms rumbling in the distance catch up with us just as we’re walking up to our cabin, and we’re grateful for the covered porch as it pours and hails and thunders around us. We squeeze in a soak between the bursts of storminess, then settle into the bar at the lodge for a craft beer and fried chicken dinner (seriously, people, if you eat fried chicken, this was some of the best we’ve found anywhere).

In the morning, the only sign of rain is the way the dirt trails have hardened around the artistic squiggles from an earlier run-off. We meet the new owner, who’s young and super bike-friendly, and then head back on our way. The Byway continues up the mountain, cresting near 8500 feet, then levels out in a series of stunning alpine meadows, before finally tipping downhill in a soaring and breath-taking descent. 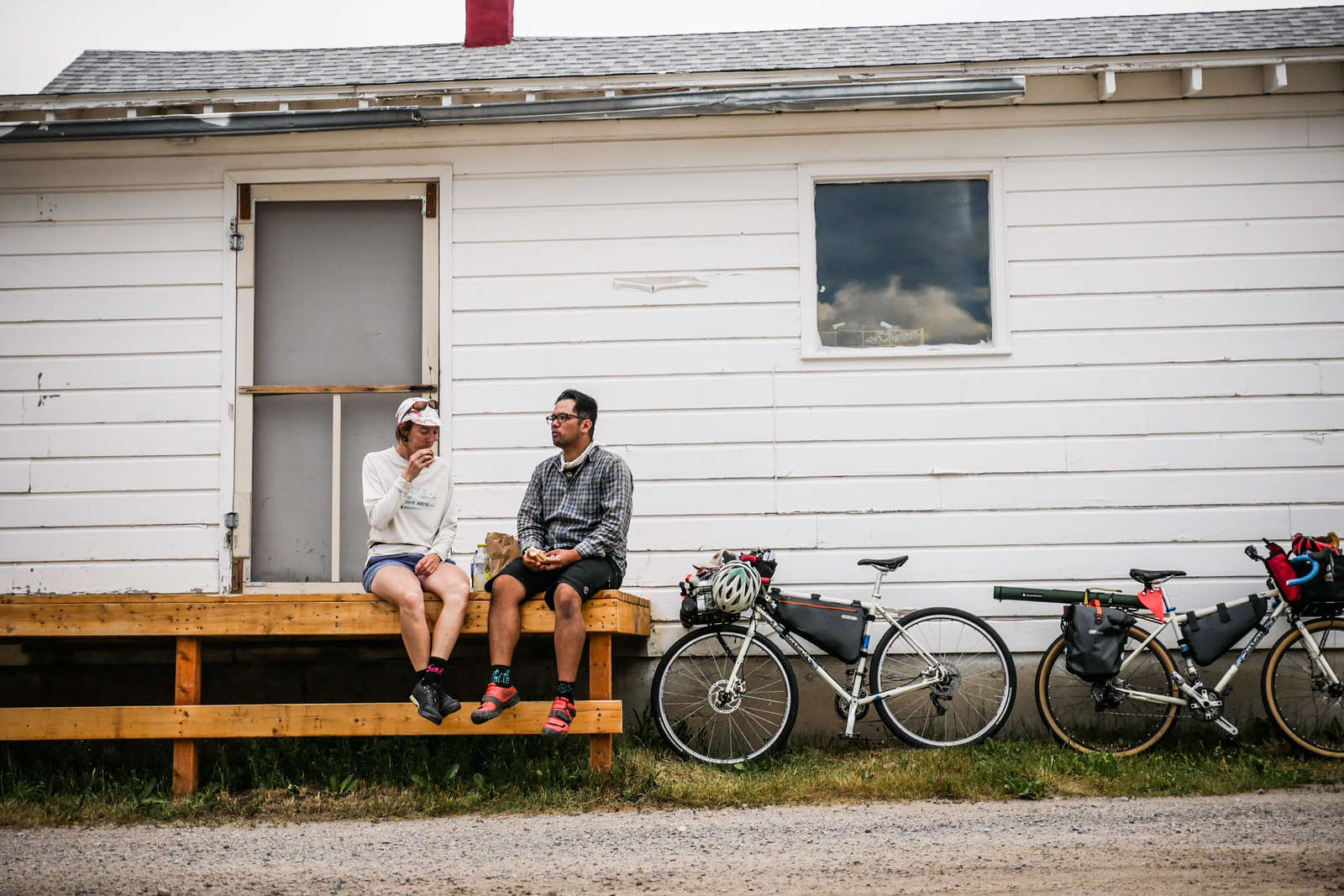 After a fast few downhill miles, the route levels a bit, and winds its way back-and-forth beside the Wise River. We stop in a few places and take notes for a return trip. And then we put our heads down to pedal hard into the headwind to reach the town of Wise River. We eat lunch at the Wise River Mercantile (which, conveniently, has a porch around the side for cyclists to eat at and rest), then we continue down the highway, stopping to fish the Big Hole River.

The highlights of this route, for us, were Bannack State Park and the peaceful riding along the Pioneer Mountains Scenic Byway. Both should be on your list when you come to the area. The full RATPOD loop out of Dillon requires highway connections, again with no shoulders, so we were grateful for some sag assistance to let us enjoy the best parts and skip the trafficked portions.

After three days of riding paved routes with views of the mountains, we’re excited to veer onto some dirt and gravel and ride up into the mountains. Our first route puts us on a double-track road out of the community of Argenta. There is nothing much in Argenta, and there is nothing at all along the route, so it’s important to pack everything we’ll need for the full ride – a lot of water, some food, and bear spray.

If you’ve never ridden a double-track road into the middle of nowhere, way up at elevation, you should remedy that quickly. As soon as we rounded the corner out of Argenta, we lost all traces of anything remotely resembling civilization. The road zig-zagged through a narrow valley carved out by a creek, through pines and meadows full of wildflowers, slowly inching its way uphill. We passed numerous other forest service roads, two cars, and one lonely cow. 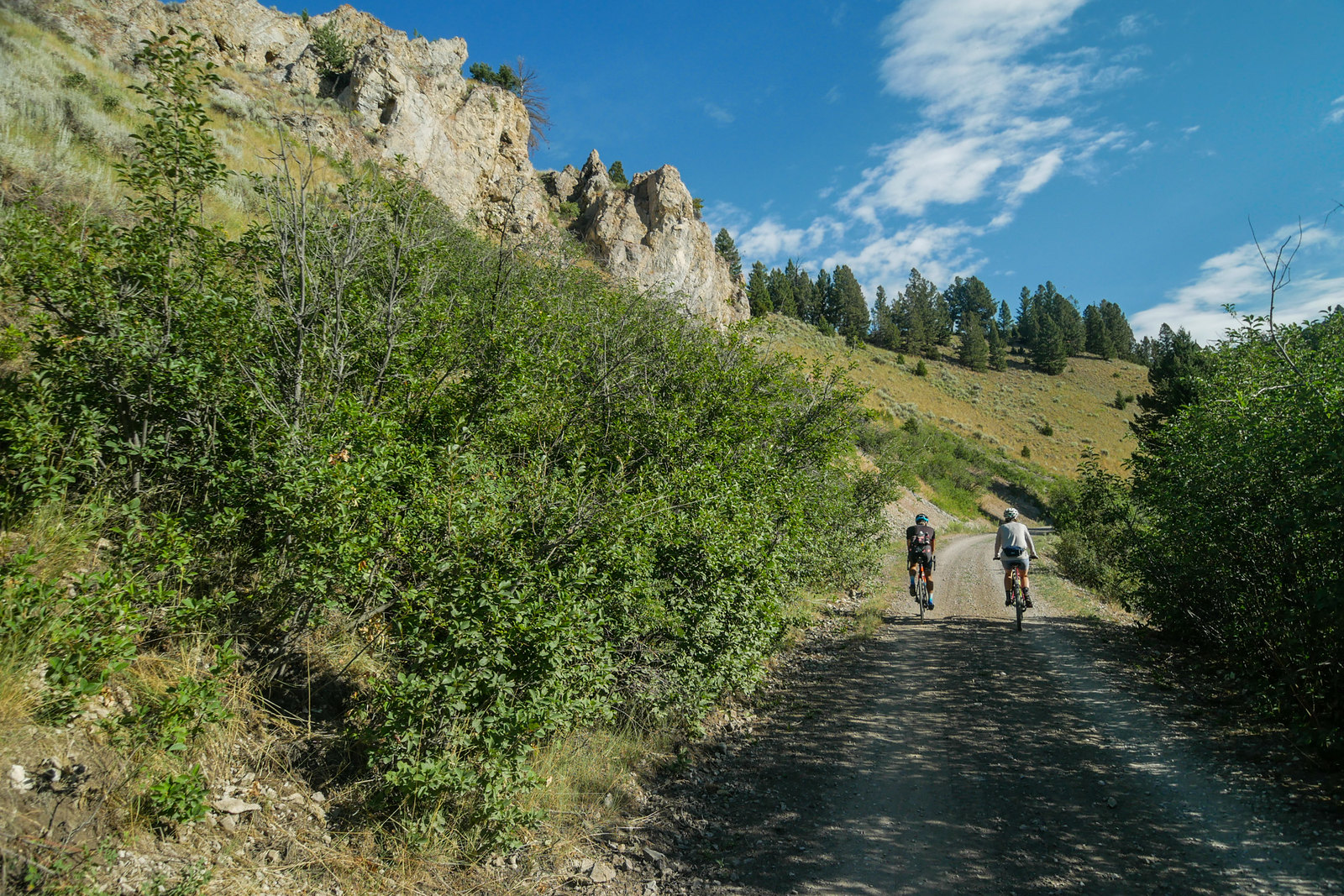 After several miles, the road makes a tight switchback and kicks up the grade, right before delivering you to a perfectly placed archway at the top and some of the most incredible wide-open views.

And then we went down the other side. While most of the ride (both up and down) was smooth dirt, there were a few really rough and really rocky sections. If you’re a good bike-handler, you could probably take any bike, but we were really glad to have our El Mariachis to simply cruise over the bumps. Especially on that descent, which was several miles long and dumped over two thousand feet of elevation.

As we wrapped up our ride, our heads were abuzz with all of the possibilities for the area. Looking at some maps, there are multiple ways to convert our point-to-point route into a loop, as both a long day ride or an overnight bikepacking trip, and it could connect right into downtown Dillon. If anyone’s interested in starting a gravel event, the Dirty Dillon has a nice ring to it.

Roughly an hour drive South of Dillon, inland from the community of Dell, there is a heavenly piece of gravel known as the Big Sheep Creek Backcountry Byway. It is wide and smooth and fast and cuts through vast swathes of uninhabited land (save for the cows who roam and wander and nibble the grass).

It is also part of the Great Divide Mountain Bike Route, allowing us to #dayridethedivide. In a way, it’s weird to section-ride the Divide, but why not? Hikers section the PCT, and this stretch of the Divide makes for a perfect gravel day ride.

Starting at 8am, thanks to the elevation and the creek alongside us, the temperature was all of 38 degrees. (Although, by the end of the day, it had more than doubled.) After carefully passing a cattle drive, we wound our way beside tall canyon walls, listening to Osprey cry in the distance. As we headed toward the North end of the Byway, the landscape opened up – and as we rounded a corner on a short downhill, we found ourselves in an enormous basin, ringed by mountains on all sides, many many miles away.

We saw a few deer in the distance, basked in the quiet, and ate our picnic lunch in the middle of the road. At one point, a passing rancher stopped her truck and rolled down the windows, and a very excited young boy asked if we wanted to play. There really isn’t much out there.

Sometimes you want drama on a ride, so you have a great story to tell afterward. And sometimes you just want an absolutely perfect day in the saddle, which is what this day was for us. But there was definitely evidence that it was the former for someone else, as we passed through a stretch of dirt road that had clearly turned to peanut butter mud a day or two before, and there were more footprints than bike tracks. Which is to say that the trade-off for all that breathtaking quiet and emptiness is the fact that you are completely on your own. Pack everything you need or be prepared to walk. 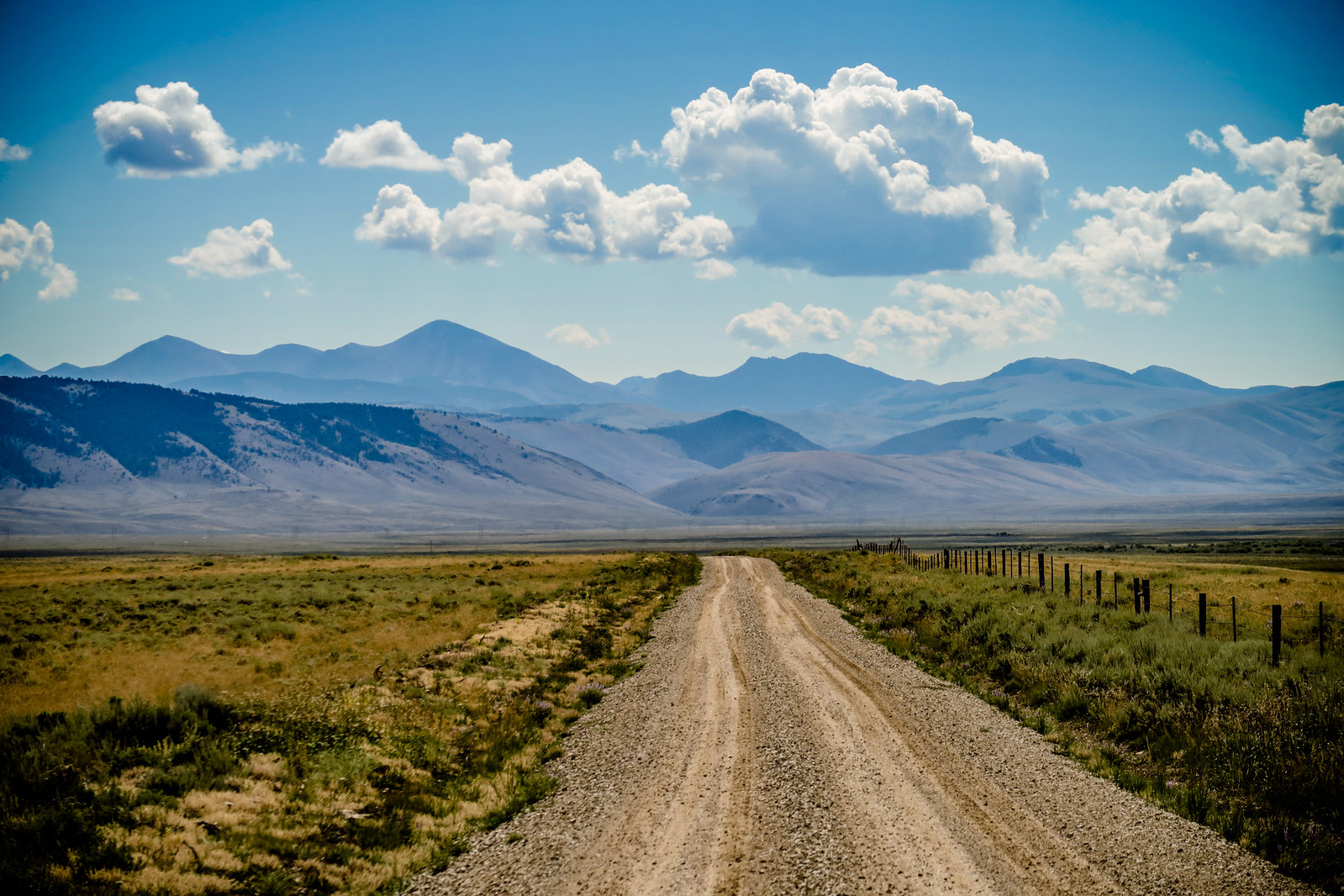 We were excited for this week from the first moment we were invited to Dillon. Having passed through the area before, we knew how beautiful it is and how great the fishing – and this recent trip just cemented the area in our minds as a great destination. If you’re into dirt and gravel, Dillon is sitting in the middle of truly awesome options, many of which leave you feeling like you’re the only person who’s been back there in 100 years.

No doubt we’ll be back, and we hope to see you there!

Thank you to SW Montana Tourism, the Dillon Convention & Visitor’s Bureau, and the Dillon Chamber for making this trip happen!