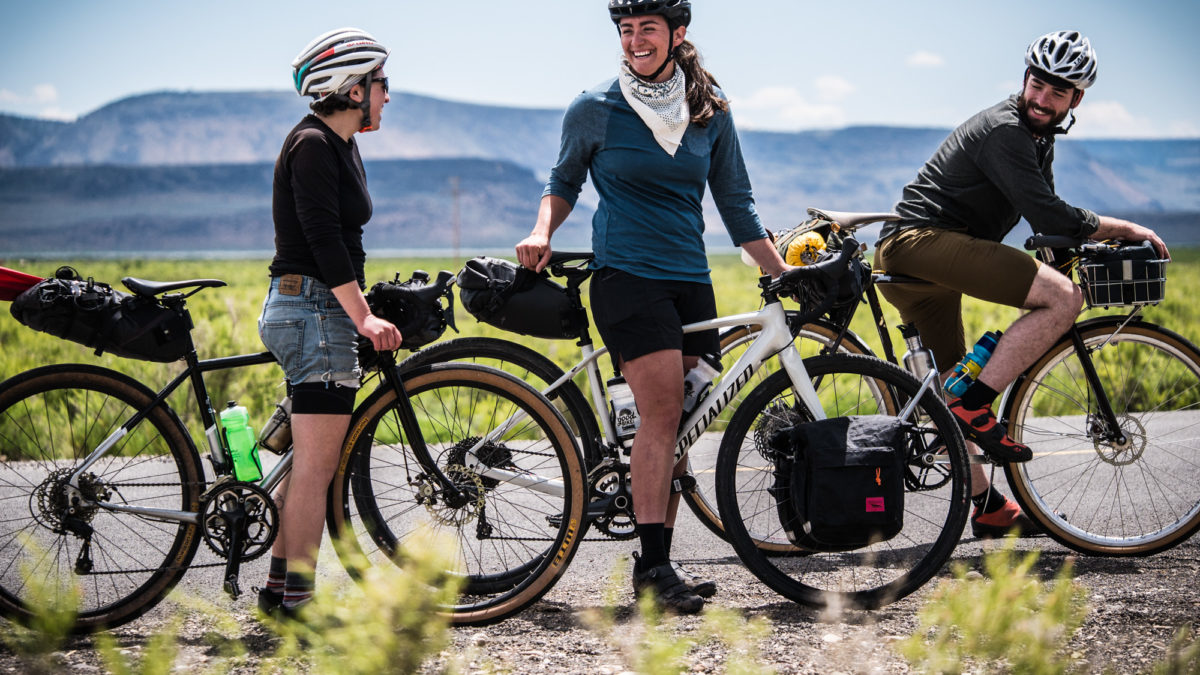 4 Bikepacking Trends in 2018 to Watch

#1 Panniers
Panniers. There, I said it. While some purists will decry riding a bike with a rack and panniers as not really bikepacking, the truth is many people want to enjoy the experience of bikepacking but are limited by the carrying capacity of a rackless system. This could be due to several reasons such as being a shorter rider and not having any usable space in the frame or not enough seat post to run a seat bag. Or, it could be money. Smaller bags means more specific and expensive ultralight and packable gear to fit in the small bags. Another reason (and we certainly fall into this), is that some want to travel by bike and not have such a Spartan experience. I love to carry cameras and fly rods and panniers definitely make that easier.

#2 Paywall
To create a good route, I mean a GOOD route (not just something you’ve ridden once and put up on Strava or RidewithGPS to share with friends) takes time, multiple scouting trips, and resources. While free route sharing is by all means awesome and we have definitely benefited from it, it does beg the question of whether the creator of a route should be compensated and if so, how much?

Right now, many routes are constantly being developed and freely shared, but I expect in the near future “signature routes” and respected route creators will offer some added value to a downloader for a fee (secret taco stop, best place to camp, en route discounts?) if not only to be fairly compensated for the time and resources spent in vetting a route. The market however will determine the value of what seems like a “free” and public resources packaged into a GPX file will be.

#3 Less BRO-packing
It is undeniable that bikepacking has a devil be damned coolness about it that traditional bike touring lacks. Whether it is images of people doing shirtless skids or riding helmetless (gasp!), the popularity of bikepacking into the mainstream was in part driven by how bad ass it looked. This is both good and bad. It quickly introduced many people into the activity without also educating them about common sense practices like leave no trace, respecting private property and generally being a mindful traveler when venturing into rural places. In a time when trail access is always under conflict and the bicycle is seen as polarizing and divisive icon, to continue to grow the market and be treated as welcomed visitors some reframing of bikepacking has to take place. It has to move beyond the image of feral manchild on bike to something more soulful and considerate. While there no doubt many bikepackers that are indeed good stewards, their voice has to be amplified.

#4 The Rise of Micro (Bikepacking) Adventures
Many get inspired to go bikepacking or bike touring by reading EPIC (all CAPS!) ride reports and photos of exotic undertakings in far off places. The fact is, only a small percentage of the inspired go on to do their own trips. For many, the stoke factor may be high but the vacation days are low. To turn dreamers into do-ers there has to be a rise of short actionable adventures. This is not a new concept and is similar to Grant Peterssn’s S24O. We have interviewed many bike shops and always ask about what the barriers are to bike travel. The answer we’ve heard over and over again is people BUY the gear, but don’t go on trips. This is either because of the lack of local routes or the lack of people to go with. A trend we see are more localized bikepacking group rides similar to Swift Campout, led either by bike brands, bike shops or local advocacy groups.

Another related trend is the rise of semi-supported bikepacking events like the Ramble Ride. These sorts of events fit into the lives of most people. It allows people to attempt a challenging bikepacking route with the buffer of some support, as well as the opportunity to do it in a social atmosphere.

What did we miss? What do you think? What bikepacking trends do you see in the coming years?