Bicycling is the New Gold Rush

(This is our final installment of Kiwi Chronicles in partnership with Bicycle Times and Adventure Cycling. Look for a link with some behind the scenes production notes on the Bicycle Times website soon.)

We are in Christchurch and are set to fly back to the US tomorrow. It’s strange to think that our three months in New Zealand is done. We initially came to New Zealand to explore their new cycle trails to hopefully learn something about them to bring back to the US. When we got here, things weren’t quite what we expected. The trails were largely in their infancy and primarily off-road, though we did manage to ride the beautiful Forgotten World Highway. In all our interviews, people kept referring to the Otago Central Rail Trail which we originally didn’t intend to do. However, it just kept coming up in nearly every conversation we had about bicycles. It was the the ride that started it all and we HAD to ride it. 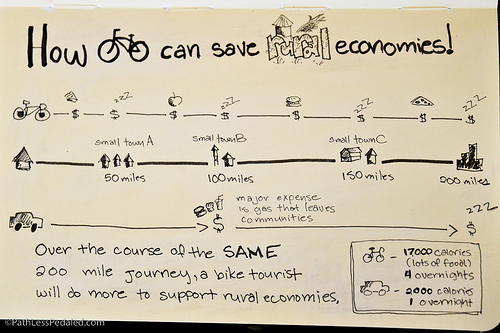 Quickly flashback to last summer to our small orange tent in eastern Oregon. We had just spent the last few weeks riding the Adventure Cycling TransAm route, passing through a dozen small towns. I was thinking hard about bicycle touring and travel and its potential to revitalize small communities and in a flash of insight drew a little infographic in a notebook. Bike travelers travel less distances than a car driver. If you were to ask “Who would finish the trip the fastest?,” the bicycle would lose. But maybe that’s missing the whole point of travel and is asking the wrong question. People travel on bikes to go slow and to really experience the countryside. For us, this means making lots of food stops and stopping early enough to have time to explore towns, go fishing and meet locals. The overall net result is that a bicycle traveler will potentially spend more money through a region than a car traveler going the same distance. This all looked great in my sketch book and we experienced it ourselves as we traveled, but the idea still seemed nebulous and hypothetical. Until, that is we went to Central Otago.

The Central Otago region of New Zealand is not what you imagine New Zealand to be. It has more in common with the dry hills of Eastern Oregon than it does The Shire of Middle Earth. The hills are brown and covered with dry tussock grass and the skies there are larger than in other parts of New Zealand. It wistfully reminded us of the American West. Like rural America the Central Otago region had many small towns that were spaced about 10 to 20 kilometers apart, the distance determined by the old parameters of rail travel. When the Central Otago train stopped running, the small towns on the line started dying on their feet. Shops, schools and post offices closed down. A strong enough wind would have carried what was left away. But then, something happened that would bring life back into the area – the humble bicycle.

The Otago Central Rail Trail was not an instant success. The farmers and small towns that the trail would run through did not want it there. It took hard work and what Daphne Hull, the chairperson of the trail’s Trust, euphemistically called “negotiating with neighbors” to make it work. I don’t want to give all the contents of the video away since its always better to hear a story from the source, but the Central Otago Rail Trail was the sketch in my notebook come to life. It was #Bikenomics in action. Bicycle travelers on the rail trail spared the small towns from drying up and blowing away. Visiting the towns, you are struck with a powerful communal pride. The accommodations are tastefully done. The food far exceeds what you would expect from a town in the middle of nowhere. The towns are growing again. People are moving back into the areas and starting businesses, all because of 150 kilometer gravel bicycle trail.

The numbers of the trail are impressive. They figure about 14,000 people ride the whole length annually. Some of the more scenic stretches see considerably more traffic than that. The trail is utilized both by tourists and locals. The trail is said to generate 12 million dollars annually for that region. For the first time in a long time, people are moving back into the area. The trail, as Graham Duncan a farmer and early skeptic put it, “its the biggest success since the gold rush” for the area. That is saying a lot.

What interests us the most is that the Central Otago Rail Trail is both a microcosm and a blueprint of what is possible with bicycle travel. It is the best case scenario of bicycles saving rural communities and economies in a confined geographic area. Over the next few weeks we’re going to sift through all our notes, photos and videos and work on a presentation on our experience of bicycle travel and tourism in New Zealand. Stay tuned! 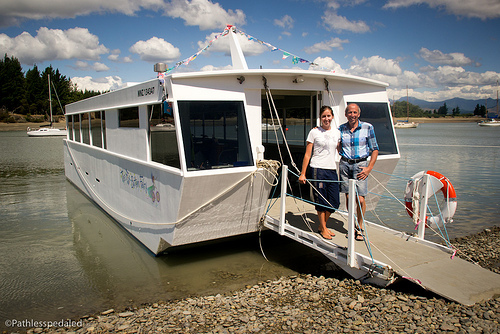 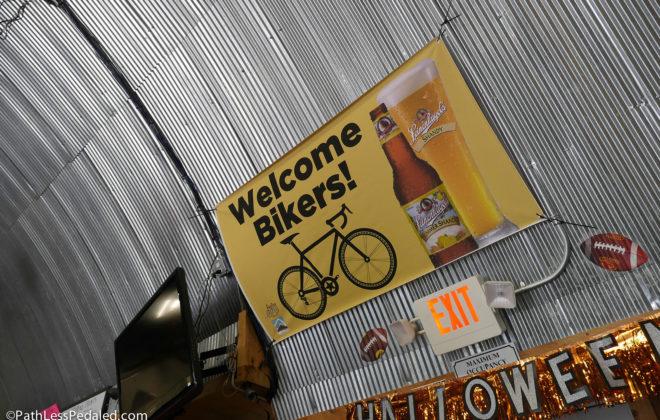 Flat Tire Lounge: Bikes, Beer, and Business Ever since our experience on the Otago Rail… 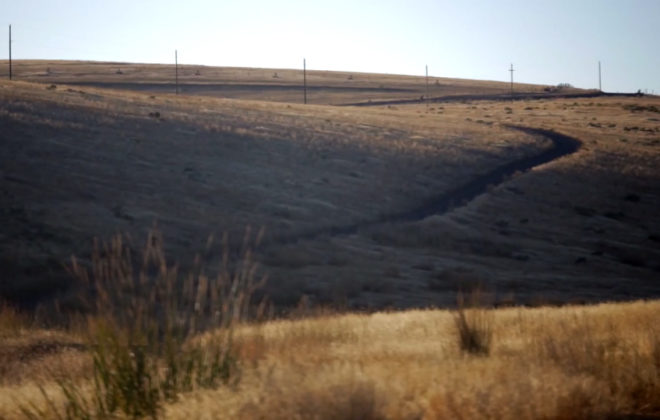 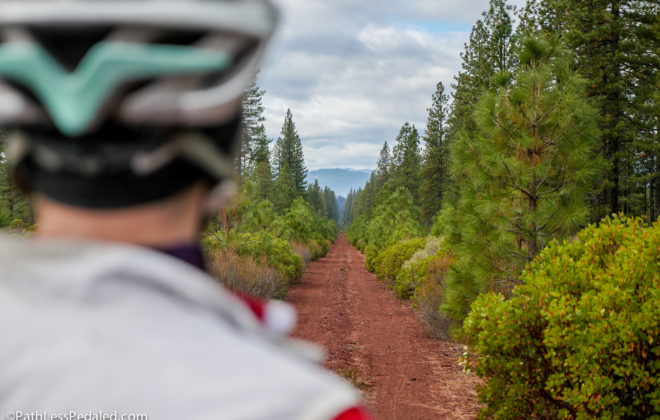 We first learned about the Great Shasta Rail Trail several months ago, and have since…