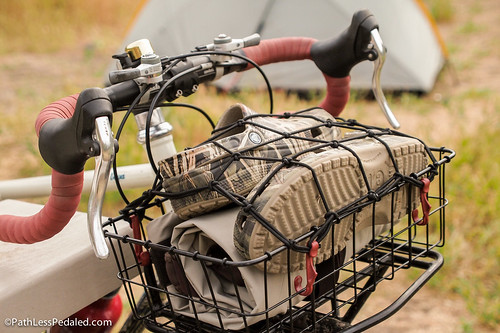 I feel like a complete goof. I’m standing in the Deschutes River, decked out in waders, rod in hand, as if maybe I belong there, but I have no clue what I’m doing.

An hour earlier, amid conversation at the fly shop, we let it slip that this is my first attempt at fly fishing. Curiosity ensues, and I try to explain what makes me want to wade into the river and swing for trout. As a feminist and marketer, it bugs me that fishing ads rarely show women. But that sounds weird and pretentious to say, so I go with the second reason – which is that, after years of watching Russ, I have simply started to wonder what the fuss is all about.

It’s over 80 degrees, sunny and dry, and the sky is swimming with giant insects. So far, so good.

We decide to keep it as simple as possible, so I use one of Russ’ Tenkara rods. No reel, no complicated cast patterns, I just have to land the fly in the right part of the water.

But first, I have to overcome my fear of water. As soon as I step into the river, I remember why I have always avoided fishing, and it’s the same reason why I avoid swimming in rivers or lakes or the ocean… I tend to panic when I can’t clearly see my feet. The river bottom is dark, and there are ripples on the water’s surface. I take a deep breath and step in, but I have to remind myself that I’m only ankle-deep and the waders and shoes will keep the river critters from brushing up against my skin.

Russ ties a fly onto the Tenkara line, the fly that the guy in the fly shop says I should rely on. I get a few pointers and throw the line into the water. Russ stands on the bank, watching and taking photos. 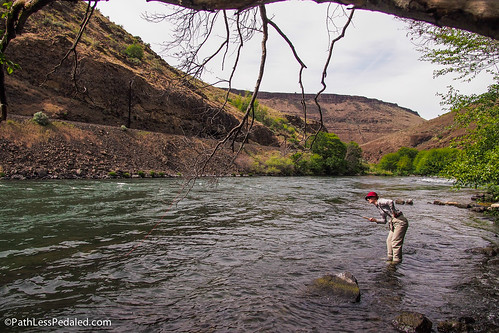 When it seems like I’ve grasped the basics, Russ strings up his own rod and steps into the river behind me. While he brings in a few trout, I snag a few trees.

Russ suggests that I move down the river a bit further, out from under the brush, but it’s too late. My fly has decided to dance with the tree branches. I wade down to where it’s royally tangled up, trying to make sense of the mess. And then I see the snake. Game over.

It rained overnight, so we wake up to a soggy campground and grey skies. The temperature is at least 20 degrees cooler than the day before. There are no giant clouds of enormous bugs. But we’re not leaving, so we load up the bikes and pedal down the gravel road.

The gravel is thick and chunky, recently graded. It’s not ideal for the tires we have, but I’d much rather be on a bike than picking my way through in a car.

Russ watches the river for rises while I take in the scenery. This stretch of the Deschutes is different from the stretch we usually visit. 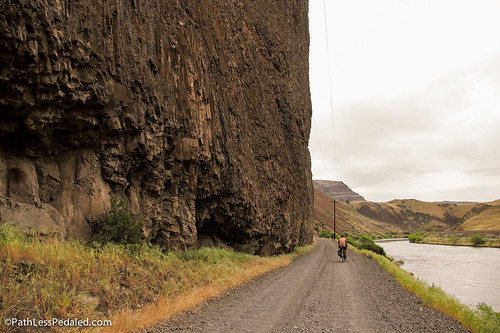 Eventually we pick a spot. Waders. Crocs. Down jacket. Tenkara rod. Magic fly. I wander back into the river, thankful that the change in weather means I won’t likely see any snakes.

The morning wears on, I catch a few more trees. We take a break and chat with another fisherman. I feel completely out of my element.

And just when I’m beginning to think that fishing is completely the dumbest thing ever… I hook into a trout. I’m so shocked that I literally scream. The guys who had just boated across the river watch as Russ helps me land a beautiful 8” rainbow. I just keep saying, ‘holy crap, I can’t believe I caught one.’ 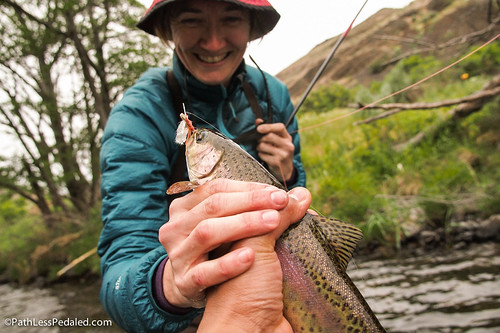 Ten minutes later, I hook another. 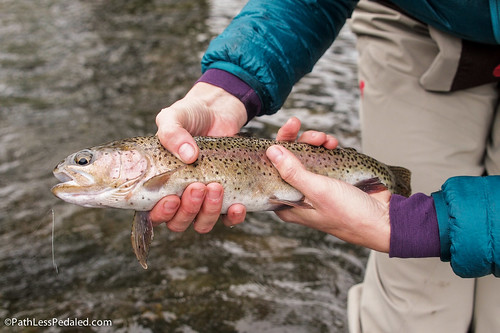 Not long after my fishing triumph, it began to rain. And rain. All through the night and into the morning. We drag ourselves out of the tent, hoping for some clear skies for a few hours. I want to catch another trout.

We pack up our stuff, hop back on the bikes, and pedal back down the road to the magic spot of the day before. I get a strike only 10 minutes after getting into the river, and I’m so mesmerized by the sight of the fish coming up from the depths to grab the fly, that I forget to set the hook.

Clearly, I’m still a rookie. But at least I finally understand why fly fishing is so darn addictive.