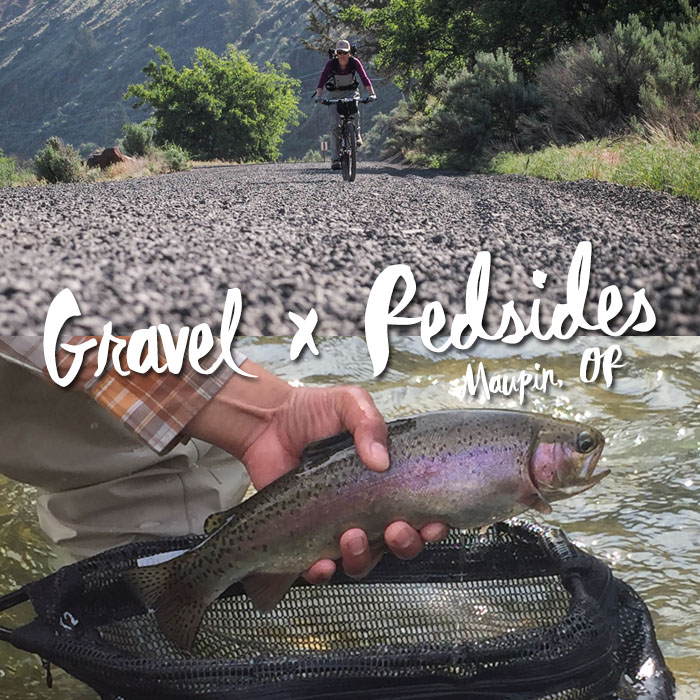 Many folks probably haven’t heard about Maupin, a little river town that has become one of our favorite escapes, but if you follow us on Instagram (especially our new Rod and Road venture) then you know we’ve fallen in love with this little part of Oregon. We just spent the last week fishing the famed salmonfly hatch on the Deschutes river, which has become an annual trip for us. You can read our first fun but somewhat unsuccessful (from a catching point of view) trip here and our more successful report from last year here. 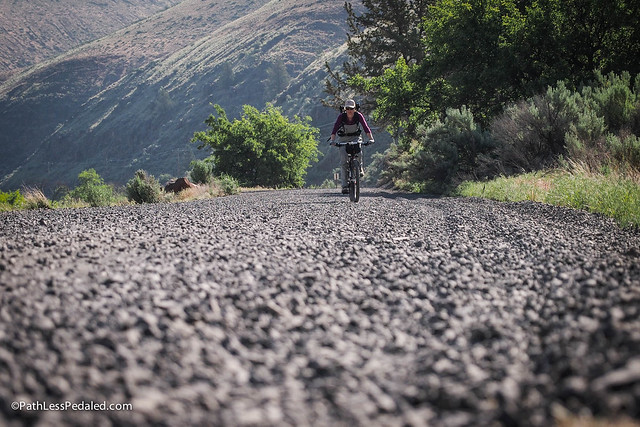 On this trip we spent four nights with our families at the bike friendly Imperial River Company, which we highly recommend if you’re looking for some indoor accommodations. Not only are they literally on the banks of the Deschutes (you can catch fish in front of the property if you’re feeling lazy) but they welcome cyclists and even have their own RideWithGPS Ambassador page!

The plan was simple: ride bikes and catch fish. I also had the goal of getting my dad, who was visiting from out of state, into atleast one of the famed Deschutes redside trout.

For bikes on this trip, we were breaking in our Salsa El Mariachis. We’ve been contemplating getting more into mountain biking and possibly bikepacking and are excited to finally have proper bikes to do it on! Our primary riding would be simply up and down the Deschutes River Access Road. Going downstream, the road is paved and lightly trafficked especially during the shoulder seasons. Going upstream, the road turns into gravel with some real deep and chunky sections. While we’ve ridden that section in the past with our Vayas, it was definitely NOT enjoyable. We would spend most of our time trying to pick good lines through the gravel rather than looking at the river. The El Mariachis were perfect for this trip. The front suspension took the edge off of the washboard and divots in the road and the wider tires with tread let us surf through most of the gravel. We could easily spend more time looking at the river searching for fish rather than trying not to slip out.

The trip was also a good way to do a shakedown of the new Ortlieb bikepacking bags. While we weren’t bikepacking per se, it gave us an opportunity to load them up and figure out how much they could carry and how they played with the bikes. We were primarily using the Ortlieb seatbag and the front accessory pouch and loaded them up with extra layers, snacks and fishing gear. 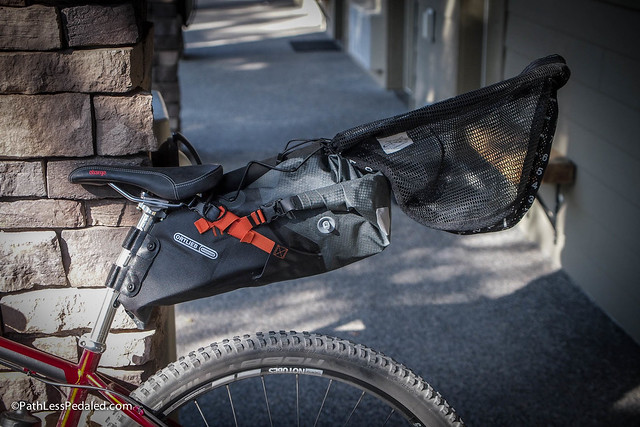 After a quick stop at Deschutes Angler to get some intel and flies, we hit the river. We figured that instead of packing our waders and putting them on at different locations, we would just ride in our waders during the next few days. The platform pedals on our bikes worked fine with the wading boots, though we did have to raise the saddles atlest an inch to compensate for the sole of the boots. On the first day we carried things on our backpacks which was fine riding out to fish. However, after hours on the river riding back on them became a bit of a pain (figuratively and literally). So on subsequent days, we tried out different ways to attach our rods, tackle, food and landing net on our bikes and bags. It was great to have a pretty low stress situation to try out different packing techniques. 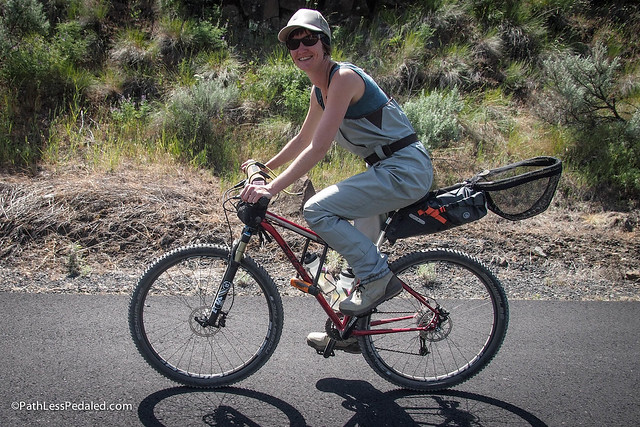 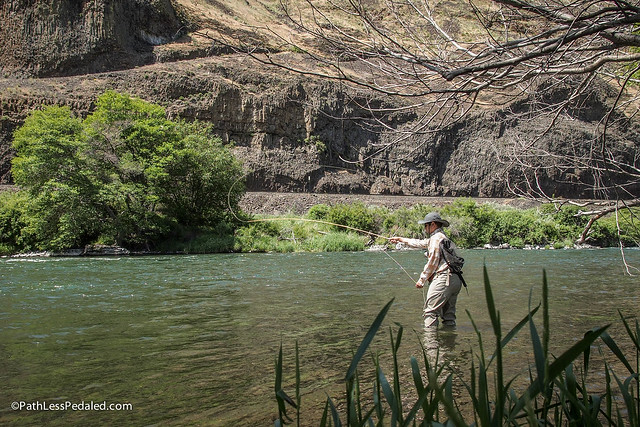 The fishing was a little slow the first two days. There were LOTS of salmonflies about, but they were either not falling in the river or the trout weren’t exactly keyed on them. Our third and fourth day on the river, the fishing turned on. We had had enough consecutive hot days to stimulate the bug activity plus there was wind. Wind, while typically not good for casting, was good for the fishing. It blew the salmonflies and golden stones into the river, turning the Deschutes into a giant bug sushi conveyor belt for the opportunistic trout. Around us we were seeing some pretty violent rises as the trout would almost leap out of the water for a big mouthful of salmonfly.

We had a few good hours when there were rises around us. Catching the fish was another matter. Sometimes the fish would pass on the fly or it would strike but we wouldn’t be able to set the hook fast enough. We all caught fish however. Laura caught the largest, a big bruiser of a fish that looked a worse for the wear but put a massive bend in her rod. My dad hooked up with a plump athletic fish that did a few aerials before coming into the net (mission accomplished!). I caught some nice fish that fought well above their weight class and hit the flies with gusto. The Deschutes is a big and powerful river and the fish that survive and thrive there are strong and aren’t easy pushovers.

The riding was relaxing and was a good way to get to different spots and to wind down after standing in the river. On this trip, the fishing was a bit more of the priority, but it was nice to stretch the legs every morning and afternoon by riding the river road. Speaking of post fishing/riding, we had awesome meals at the Riverside restaurant in Maupin. The food is spectacular. At our table, we had everything from smoked game hen, steaks on a bed of perfectly roasted asparagus to some scratch made cheesecake with real whipped cream and real fruit glaze topped off with some craft beer. If you’re staying in Maupin or simply passing through, the food there is worth a stop!

For me, it was great to see Laura advance in her fishing skills. She caught her first trout on the Deschutes almost exactly a year ago and since then she has become more adept at reading water, tying knots and casting a Western style fly rod. For us, there are a lot of elements in fly fishing that we love about bicycle touring. They are both physical activities, they both require you to actively read the landscape (or waterscape) and they both give you excuses to stop and get to know wonderful small towns like Maupin.

While there, we also gave a short presentation talking about bicycle tourism at a chamber meeting. It was held in an American Legion building just off of the main street. We spoke about the benefits of having a Scenic Bikeway (they are currently proposing one), joining Oregon’s Bike Friendly Buisness Program as well as how bicycling can fit into the recreation opportunities they already have.

Wasn't all fun and games. Got to do a little presentation on #biketourism and #oregonscenicbikeways at a Chamber event in Maupin. Hope to get more businesses excited about bikes! #bikeadvocacy #ridebikestraveldogood #traveloregon #tourism #travel

By now, the salmonfly hatch is probably winding down but there are still tons of fish in the water. We’re looking forward to it again already next year as well as planning our next biking and fishing excursion. If you’re into both fishing and bicycling, Maupin makes an awesome basecamp and we highly recommend it as a long weekend escape from Portland (the weather is usually drier too…bonus!). Tight lines and rubber side down.