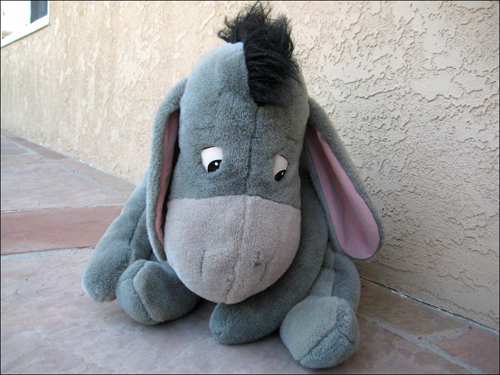 Eeyore has always held a special place in my heart. He was always my favorite character from the Christopher Robin books, which my mom read to me when I was a kid. And when I was in 8th grade, I was lucky enough to play Eeyore in a stage version of “Winnie the Pooh.” (It totally made my year.)

So, from the moment I first walked into one of the souvenir shops at Walt Disney World in 1999 (I worked there for a semester), I wanted this big stuffed Eeyore. I saved my pennies and then used my 40% cast member discount and took him home – and I was so thrilled. He was my big stuffed buddy.

Eeyore sat on my bed for years. Then when it was no longer just me in my bed, Eeyore moved to the floor. Over the past decade, Eeyore has found a friend in every child that has come into his presence – and in one very fluffy dog named Oso.

It was quite possibly one of the best and yet most frivolous purchases ever. But having Eeyore hang out with me has been a true delight. And I really think that he soothes my own inner Eeyore.

Now it’s time to share my Eeyore love – and I am in search of someone else who will find such joy in his presence. Perhaps one of my many friends who have kids (or are expecting)?