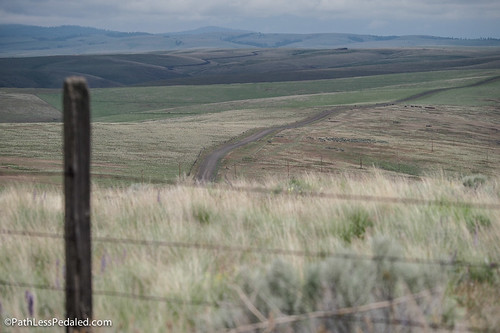 Exasperated, I stopped in the middle of the mud field of a road. I could no longer shoulder my bike, after carrying it most of the way down the hill. But pushing wasn’t an option either, as the peanut butter mud clogged up the tire tread and chain and everything else in the bat of an eye. So I just stood there for a moment, pondering what to do.

And that’s when I saw Phil’s van, chugging up the hill on a rescue mission. I stuck out my thumb, amazed that he’d gotten enough traction to come after us. As we loaded up my muddy mess of a bike (and muddy me), Phil joked, “if everything went perfect, it wouldn’t be a good story!”

In Oregon, the part of the state West of the Cascade Mountains is known as the “Wet Side.” The Eastern part of the state, predominantly high desert and ranch land, is the “Dry Side.” There’s a reason for this – it’s usually exceedingly dry and sunny in the East.

The Dry Side also has spectacular gravel roads that wind their way through endlessly open and empty vistas – which is why we had crossed the mountains with a motley group of friends.

We were base-camped out of Treo Ranch, a hunting lodge that caters to cyclists in the off-season – and a slate of beautifully challenging rides had carefully been planned for our weekend. 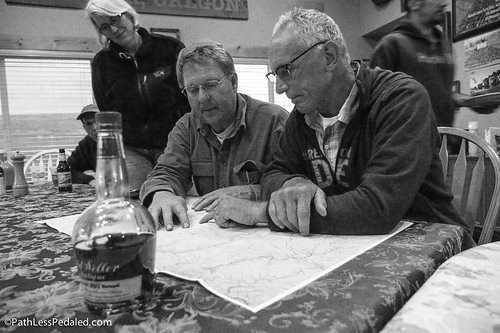 Phil and Dan plotting ride routes for the weekend.

But Russ and I seem to be on a streak of having rainy weather on the Dry Side – and we woke up Saturday morning to a soggy landscape that had been pummeled with rain overnight.

We dawdled over coffee and breakfast, trying to pull up the weather forecast via weak internet and cell service, before deciding to just go for it. This was clearly not the weather we wanted, but there was no point in wasting the trip. 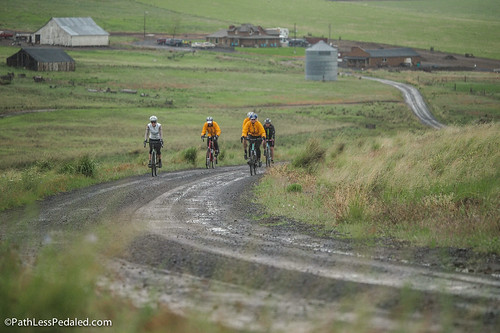 Dodging puddles as we pedaled away from Treo.

We followed the undulating ridge line out of the ranch. All of Eastern Oregon, it seemed, rolled out alongside us, a never-ending series of deep valleys and tall hilltops, all covered in sage and wild grasses.  The storm clouds of the night before still lingered on top and around us, lending a surprisingly grey cast to the landscape. 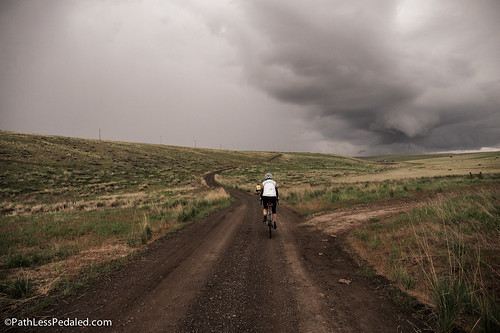 Determined to ride, we ignored all the ominous signs. 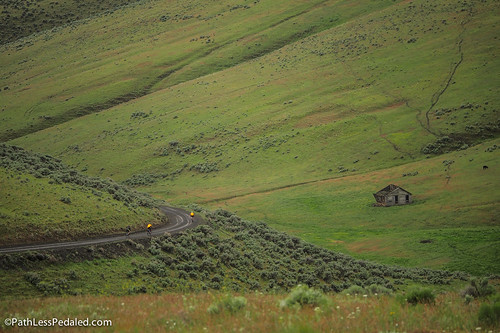 After a few miles, the storm clouds seemed to lessen, and we descended into Buttermilk Canyon.  The creek had long ago carved this narrow and winding canyon, and there was an old ranch spread out through the bends. Hundreds of swallows rushed out of their nests in the cliff walls above us – and, for a few miles, everything seemed perfect.

Then we started up the hill.

At a certain point, the good gravel we’d been enjoying turned into sticky muck. Mud glommed on to every possible surface, gumming up tires and chains in seconds. And it brought along the remnants of the gravel that should have surfaced the road, so that pebbles could be heard scraping frames and found clogging chain links to the point of cogs no longer turning. 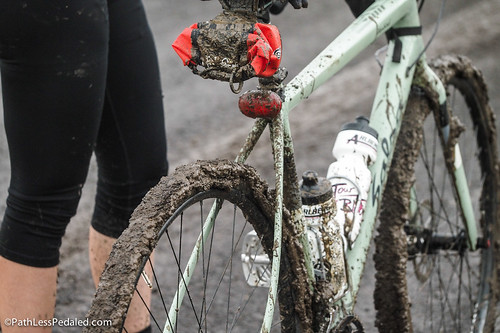 There’s a bike under there somewhere.

When the mud got too thick on my tires, I walked.

When the mud got so sloppy that it tried to suck off my shoes, I carried my bike. 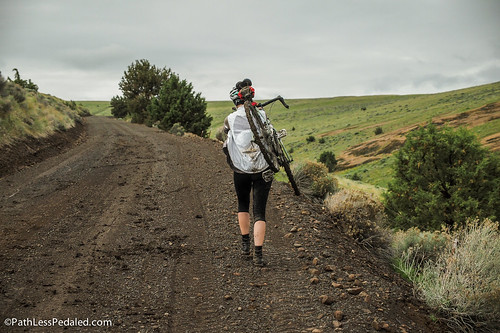 Cyclo-cross style, aka why I have a bruise on my shoulder.

Slowly, gingerly, we made our way up the hill.

At the top, I discovered that I had cell signal, so I snapped a photo and posted it to Facebook, laughing at the ridiculousness of the mud.

And then I heard the worst words you can hear on a ride: “I broke my bike.” In the fight of Russ vs the mud, the mud had won. It had ripped off his derailleur, which now hung from his chain in a sad and mangled ending.

Our 70-mile ride had been reduced to just 16, and the mud had left a few casualties in its wake. 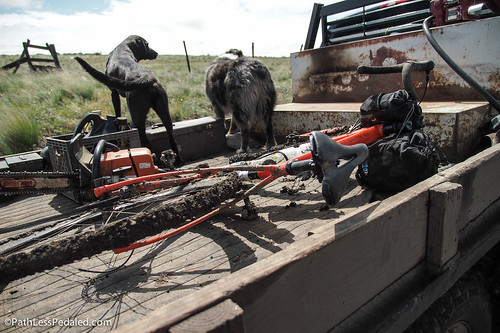 Unable to make all the necessary repairs on the fly, Russ and his steed hitch a ride with a passing rancher.

There is something about Eastern Oregon that keeps drawing us back. The landscape is mesmerizing, with its big skies and rolling hills. You can stand on a hilltop and feel impossibly tiny, just as you will check that your eyes are open when it’s pitch black at night and that your ears can still hear when it’s stunningly quiet. Whenever there is an opportunity to ride around Eastern Oregon, I will take it, and it will never be enough.

But the allure of Eastern Oregon can obscure an important fact: you can easily get in over your head.

On a ride last fall, we climbed up a twisting gravel road and dropped into a deserted valley. Breathtakingly beautiful, and eerily easy to just disappear and never again see anyone or a hint of civilization.

I love the feeling of being completely independent and self-sufficient. But, I have to say, when things go wrong, when the road tries to swallow you alive, it’s nice to know that someone has your back. 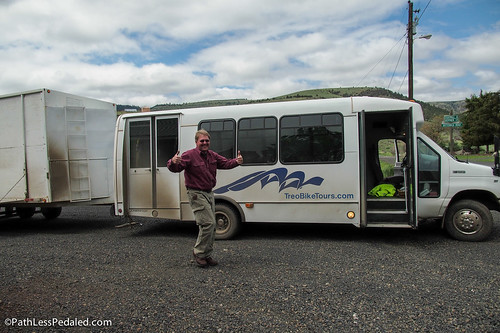 Thank you Phil and your mud-conquering van.

We first met Phil roughly a year ago, and we were instantly impressed. A former rancher and mechanic, Phil has run a hunting lodge near Heppner, Oregon since the 1980s – and began to reach out to cyclists a few years ago to fill the gap during the hunting off-season. 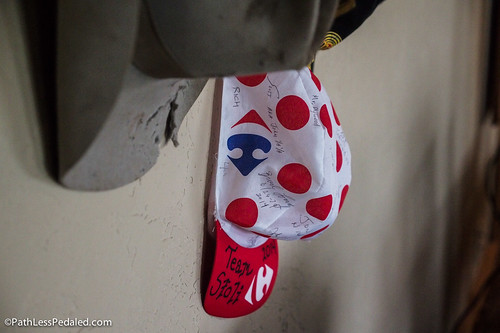 At Treo, cycling and hunting blend together under one roof, in a style that’s both odd and perfectly fitting. There are pheasants on the wall and cue sheets on the side table. There’s Bud Light for the hunters, IPA for the cyclists – and everyone gets a steak at the end of the day (this is Eastern Oregon, after all).

And that’s what makes Treo so inviting – rather than putting on airs, it’s a cozy slice of Eastern Oregon. It’s an opportunity to experience a place that’s vastly different from where most of us live, to rub elbows with the history and culture of this part of the West – and to cycle some of the most beautiful roads in Eastern Oregon, without a second thought about ‘did I pack enough water?’ and ‘what if I break my derailleur in the middle of a long ride?’ 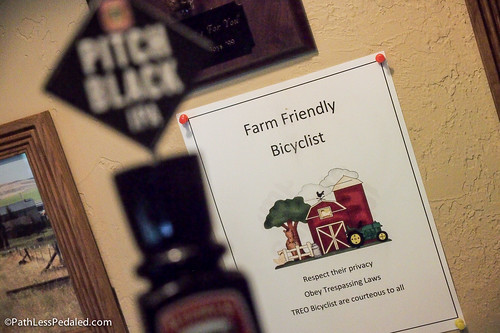 Helping cyclists blend into the surroundings and be a good neighbor.

The morning after the mud fiasco, we awoke to sun streaming in the window. Was it all a dream? It would be easy to believe that we had simply imagined all those miles of walking through muck – if not for Russ’ derailleur-less bike propped against the wall.

On a normal independent trip, we would resign ourselves to “not chancing it.” But the promise of van support on our planned 40-mile route meant that we wouldn’t have to miss out on the last day of (now dry) Eastern Oregon gravel. Russ could spin on his make-shift single-speed – and bail if it turned out to be a terrible idea.

In sharp contrast to the day before, we were greeted by a sparkling blue sky, dotted with a few perfect powderpuff clouds. Out through the ghost town of Hardman, down a roaring canyon descent, uphill again along a winding creek, and into the Ponderosa forest. Treo Ranch is located on a grassy slope, surrounded by rangeland – so the tall pine trees surprised and delighted us. And then they surprised us even more when they suddenly disappeared on the other side of the summit, and we followed a screaming descent through wildflower-dotted prairie-land. 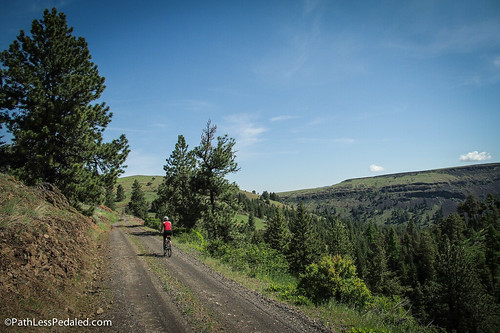 Incredible views around every turn. 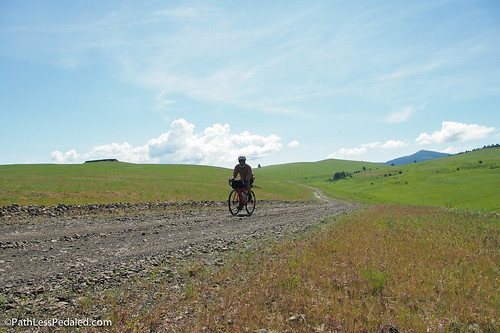 A much better experience in the sunshine.

The landscape and terrain of the route changed every few miles, a perfect welcome-to-Eastern-Oregon gravel sampler route. Up, down, narrow canyons, wide open fields. Constant wonder and surprise, on a deliciously warm and sunny day. It was exactly the ride that we had been looking forward to – made all the sweeter by the sheer inability to experience it the day before.